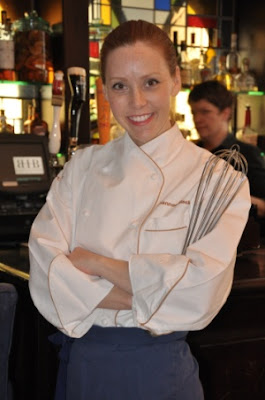 The Beacon Hill Hotel & Bistro has hired a new Pastry Chef and she has already made a big impact on the local dessert scene.

Pastry Chef Shannon Black graduates with a B.A in Economics from Indiana University, which led to a job as a financial advisor. But she eventually realized she lacked passion for her job and found passion elsewhere, back at home, cooking. This led to a life changing decision and she chose to pursue a career making French pastry.

Shannon enrolled in the French Pastry School in Chicago, which is owned by two incredibly talented pastry chefs, Sebastien Cannone MOF and Jacquy Pfiefer. Upon completing the intense pastry training program that focused on classic French methods, quality ingredients, and organization at the Chicago school, Shannon was ready for a challenge.

For the next 3 years, Shannon’s life was dedicated to 12-15 hour work days, 6 days a week of physically demanding and mentally stimulating labor. Her hard work and dedication was awarded as she spent time at some of the most high-end restaurants Las Vegas and New York has to offer: The Wynn, Payard Patisserie & Bistro and Bartolotta Ristorante Di Mare. It was at The Wynn in Las Vegas, where Shannon had the privilege of working closely with Frederic Robert, Alain Ducasse’s Pastry Chef. It was at these restaurants and hotels in which Shannon was promoted to titles that developed from Commis patissie, Chef de Partie and then finally to Pastry Chef.

Itching to take a much needed vacation, Shannon decided to take a trip to the one city that could truly change the way she made pastry, Paris, France. She used this trip for research by meeting and speaking with great Parisian chefs and also nibbled on some delectable Parisian pastry. After returning to the United States, Shannon noticed a posting on Craig’s List, made by Jason Bond of the Beacon Hill Hotel & Bistro. He was looking for, “Pastry Chef, French Technique, Local Ingredients.” A dinner consisting of Jason’s very own recipes was all Shannon needed to agree upon working with Bond. Together, this dynamic duo now makes up the driving force behind the Beacon Hill Hotel & Bistro’s fantastic fare.

Shannon's skills were recently put to the test at the annual “Chocolate Madness” event, hosted by NARAL Pro Choice Massachusetts. This event was held on April 29 at The Cyclorama in Boston’s South End.

When the all the chocolate dust had settled, standing in the winning circle was Pastry Chef Shannon Black of the Beacon Hill Hotel in Bistro. Chef Black won her category Flowing Water: Spoonfuls of Puddings, Ice Cream and Sorbets for her Guanaja Chocolate Ice Cream with Cocoa Grue, Toasted Almonds and Smoked Salt. Check out the Leather District Gourmet's take on this dessert, as she was one of the judges at this event.

When asked about winning Chef Black said, “It was truly wonderful to participate in an event with so many talented people. This being my first competition representing the Beacon Hill Hotel & Bistro, also made it very special.”