The Waters Crest Winery is a family-run operation owned by Jim and Linda Waters. Jim was once a firefighter and he worked at Ground Zero after 9/11. He had an epiphany, deciding that life was too short and he chose a new career, to open a winery. The grapes they use come from local growers, and Jim selects only high quality fruit. I really like their philosophy, "At Waters Crest, Wine is our Passion." 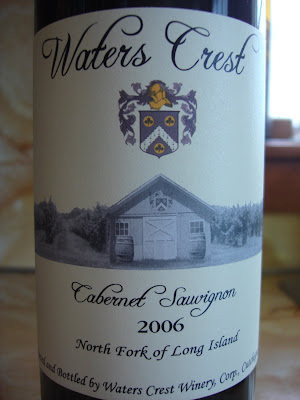 The 2006 Cabernet Sauvignon ($39.99) is a new release. The wine had a nose of cherry and eucalyptus and on the palate, there were plenty of cherry flavors as well as hints of spice and a mild earthiness. The finish was fairly long though there was a touch of bitterness at the end. Tannins were restrained and it was an easy drinking wine. All of my friends, as did I, enjoyed this Cabernet but we all felt it was over priced. There was insufficient complexity for me, and not enough depth of flavor. At half the price I might buy it, but I expect much more from a $40 wine. 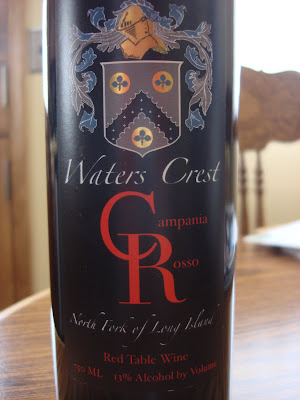 The 2005 Waters Crest Campania Rosso ($35.99) is a blend of 73% Merlot, 15% Cabernet Franc and 12% Cabernet Sauvignon. This wine had a nice dark red color and an enticing red fruit smell. On the palate, it had a dry, almost austere, taste with flavors of raspberry and cherry. There were hints of spice and good acidity. Tannins were moderate and the finish was decently long. I enjoyed this wine as did a few others of my friends. Others felt it was too light, wanting a richer, more full bodied wine. Yet again, we agreed this wine was too expensive for what it delivered. 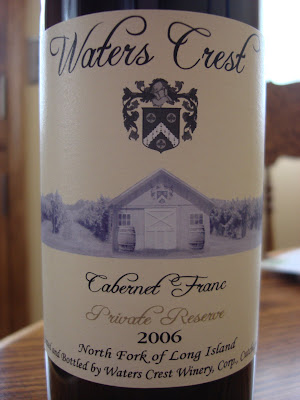 The 2006 Waters Crest Reserve Cabernet Franc ($34.99) is made from 100% Cabernet Franc. It was aged for 16 months in new French Oak and only 214 cases were produced. The nose was very enticing to me, a smoky bacon smell being most prominent. On the palate there were nice flavors of plum, blackberries and touches of spice. There were none of the vegetal tastes that I dislike in Cabernet Franc. My friends were divided on this wine, some liking, others not. Though I enjoyed the taste of this wine, I still think it is to expensive, especially considering the 2007 Shinn Estates Cabernet Franc, which was an amazing wine, and will only cost about $35-$40.
Overall, Waters Crest is making some good wines, but they did not impressive me sufficiently to justify their prices.
Posted by Richard Auffrey at 6:00 AM