Once again I am a bit disappointed because there was no sake. As one of the largest local wine events, the Boston Wine Expo would be a good opportunity for sake producers to introduce their products to both the trade and consumers. So where were they this year? Ah, well, let us move on to other matters.

This past weekend, the Boston Wine Expo took place and I attended on Sunday, as the snow on Saturday kept me from getting there. There were some positive changes this year, from reduced ticket prices to a new mobile app. I actually enjoyed their new mobile app once they added a list of the wines at the event. It became easy then to mark your favorite wineries and wines. The app was easy to use and I hope they continue to use them for future Expos.

Last year, the Expo had lengthened the trade tasting time to three hours but cut it back this year to only two, which had been the norm prior to last year. It would have been better for an extra hour as the trade hours are usually a quieter time, allowing me the ability to better speak with the wine makers, distributors and representatives about their wines. Once all the consumers enter the event, it becomes more difficult to interact with the wine reps.

They also made some changes to the set-up of the event, and it seemed roomier but also a bit smaller, with seemingly less wineries represented. In prior years, the outside aisles were for all the food and lifestyle exhibitors, but this year, they spread those exhibitors throughout the room. As usual, I spent much of my time at the Expo seeking out the less common wines, lesser known grapes, wine styles or regions and I will discuss many of my finds this week. I'll start off my coverage with Mead Wars! 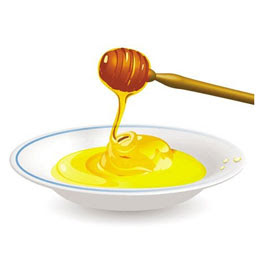 Mead, also known as honey wine, is an alcoholic drink basically produced from honey, water and yeast. Numerous variants exist, over at least 35, where the mead may contain spices, herbs, fruit or other additions and many of those variants have their own special terms. For example, a mead flavored with spice is known as a metheglin while a mead made with fruit is called a melomel. Mead is one of the oldest alcoholic beverages, at least 9000 years old, and there is an argument it might have been the first alcohol ever created. Mead has existed in numerous cultures all around the world, even figuring into the mythology of some of these cultures, such as the Norsemen. There has been a resurgent modern interest in mead, especially by home wine makers, and some commercial meaderies now exist.

My own experiences with mead have been meager, often restricted to what I have found at Renaissance Fairs. Thus, I was eager to taste the meads from two local producers, Moonlight Meadery and Maine Mead Works, at the Expo. 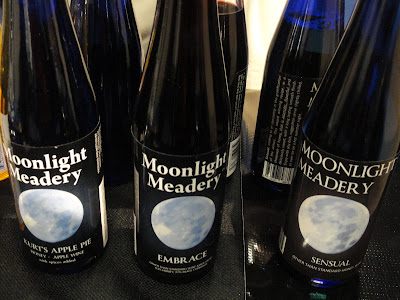 "Mead is passion, it's about romance, it's about enjoyment, family and friends, and sharing."
--Michael Fairbrother

The origin of the Moonlight Meadery, located in Londonderry, New Hampshire, extends back to 1995 when the owner Michael Fairbrother, created his first mead, a cyser, an apple and honey mead. Then, in July 2010, Michael commercially launched his flagship mead, Desire, and now produces about 18 different types of meads, most named by an interesting descriptor, such as Smitten, Tease, Flirt, Wicked, and Paramour. They try to use local honey and fruits whenever possible, and are the first New Hampshire winery to be distributed in California. At the Expo, Moonlight presented four of their meads.

First up was the Sensual, a traditional mead (15.2% alcohol) that was aromatic and had a rich honey taste, though it was not overly sweet. Along with the honey flavors, there were nutty undertones and mild floral notes. It was a tasty drink, which I enjoyed, and would make for a fine dessert drink, or maybe an accompaniment with spicy Asian food. The Embrace is a blend of 63% honey and 27% black currants (15.7% alcohol), which has a more reddish color and presents more dry and strongly tart. The honey notes are very subdued and the currants flavors predominate. I didn't care much for this as it was too tart for my own tastes, but if you enjoy tartness, I believe you would enjoy this mead.

The sweetness returned in Kurt's Apple Pie (16.8% alcohol), named after Michael's best friend, Kurt Demmer, and which is their best selling mead.  It is made with honey, local apple cider, Madagascar-bourbon vanilla and Vietnamese cinnamon and tastes exactly like liquid apple pie. I can understand why this mead is so popular, as the compelling blend of flavors works very well together. It is not cloyingly sweet and would be a perfect accompaniment with dessert. Though the alcohol content is high, it is not reflected in the balanced taste so you should be wary that you don't drink too much. I highly recommend this mead.

The final mead was more unique, the Utopian (16.9% alcohol), which is aged in Sam Adams Utopian barrels, a rare and special beer. The Utopian is a single barrel release and each bottle is noted with the bottling date and number of cases produced. This is certainly an interesting and complex beverage, which does remind me of an artisan beer, though it did not appeal to my own preferences as I am not much of a beer guy. But I certainly appreciate the unique nature of this brew.

The meads intrigued me sufficiently that I want to visit Moonlight, tour the meadery and taste more of their portfolio. 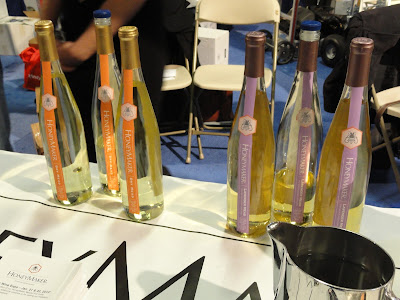 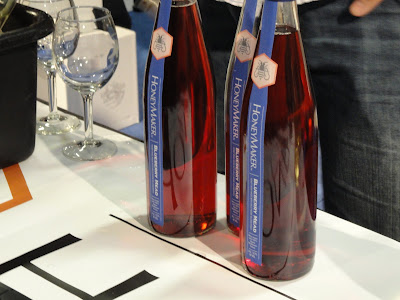 I first tasted their Honeymaker Dry Mead (12.5% alcohol) which is produced in small batches and is oak aged. It actually had a fairly complex taste, dry though with subtle honey notes, as well as touches of citrus (especially orange) and floral notes. A pleasing taste and I would recommend this mead.  The Blueberry Mead (12.5% alcohol) reminds me more of a rosé wine with its light red hue, but it is made with organic wild blueberries. It had an appealing berry aroma and on the palate, the blueberry taste was pleasant, with a bit of tartness. It would be a fun summer wine. Lastly, I tasted the Lavender Mead (12.5% alcohol) which had a strong floral smell which came out dominant on the palate as well. I didn't care for the prominent lavender flavor, which is more a personal preference. All three of these meads are also gluten free. In addition, I would like to visit this meadery and taste more of their meads.

So, if you have not tasted mead before, give it a chance, especially if you live locally and can obtain meads from Moonlight Meadery or Maine Mead Works. With all of the diversity in mead styles and types, you will likely find something that appeals to your personal preferences. I know I will be exploring mead more in the future.
Posted by Richard Auffrey at 4:00 AM

I am so glad you covered mead this way. I've written about Moonlight's products more times in my own blog than any other producer. That might be that they are 3 minutes from my house or that I've caught the meadmaking bug and am attempting to imitate some of the great flavors and textures I have enjoyed in the Moonlight products.

I got inspiration from the Maine Meadworks lineup as well, but I'll keep those ideas quiet until I have time to put them into practice.

Keep and eye on this story (and I am going to be selfish here) because Moonlight will be introducing a new product in 2012, a vanilla/orange mead, based on my very own award winning recipe. I can't wait to see how my humble recipe is taken to greater heights in the hands of a meadmaker with much more experience than me.

Let me know when you plan to come up, I'd love to join you in the tasting room. I'll even offer to host a tasting of my own meads, I'd love the feedback.

We've got some interesting stuff brewing up in these parts as well, at Honey Gardens, and at Artesano Mead. My next door neighbor and cohort in ferment makes a maple mead, and this year I even tried my hand with a maple melomel and that mystery red grape.
Richard, if you do visit Jason, give the eheads-up and maybe I can meet you guys in the middle (and horn in on the private tasting ;)