Samobor: From A Royal Free City to Kremšnita (Part 1) 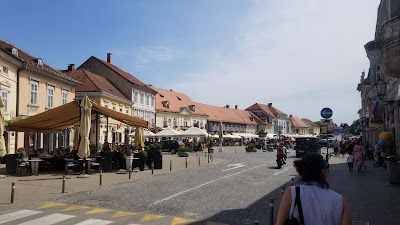 Kremšnita, Bermet & Muštarda! A delicious triad of specialities from the town of Samobor.
The town of Samobor is located about 20 kilometers west of Zagreb, and only about 5 kilometers from the border of Slovenia. As it's only a short distance from Zagreb, it makes for an excellent day trip, to visit this historic and fascinating town. We spent several hours exploring Samobor, and it would have been easy to spend an entire day there, checking out all of its interesting history, food and drink.
In 1242, King Béla IV of Hungary, established Samobor as a royal free city, which he also did for Zagreb, Jastrebarsko, and Krizevci. At that time, the nobility of the region was battling against the king, seeking to take power from him. To prevent this problem, the King acted, creating these royal free cities and hoping to revive the local economies. These four cities acquired the right to elect judges, administer the law for their citizens, and to stage fairs and markets. For a number of years, Samobor was even more of an important mercantile center than Zagreb. 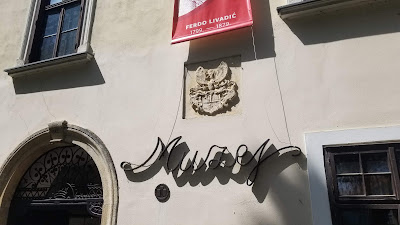 We began our own exploration of this town at the Samobor Museum, which is located in the former house of Ferdo Livadic, an early 19th-century Croatian composer who was also important in the Illyrian movement, which sought to unite Croatians. It's also where the famed song, Još Hrvatska nij’ propala ("Croatia has not yet fallen") was first performed. The museum contains a variety of exhibits concerning the history of the Samobor region, starting during the prehistoric times. There are ancient fossils, artifacts from the ancient Romans, and plenty of medieval artifacts, artwork, books, and more. It was a fascinating museum, providing insights into Croatian history, and not just the region of Samobor. 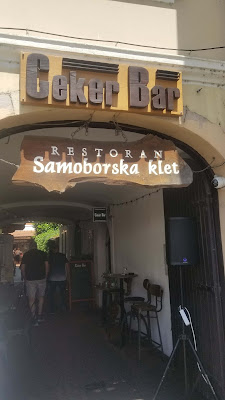 We stopped for lunch at the Restoran Samoborska Klet, which is known for its Croatian specialties. It's located just off the main square, and seemed to be a very popular destination. 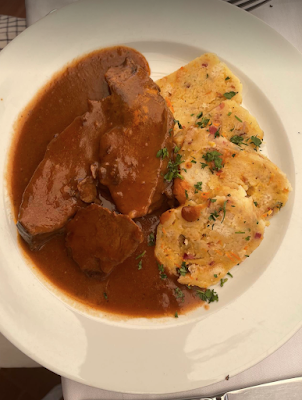 I opted for the Pork with Bermet sauce and "dumpling like bread." The pork was tender, the sauce flavorful, and the "bread" was interesting and tasty, easily sopping up the sauce. 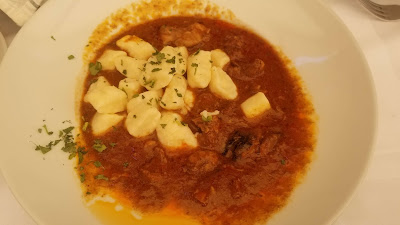 Some of my dining companions ordered the Venison Stew with dumplings, and I tasted this dish too. The venison was excellent, also tender and very flavorful. Both were hearty dishes, fine comfort food, although I might have enjoyed the venison a bit more than the pork. 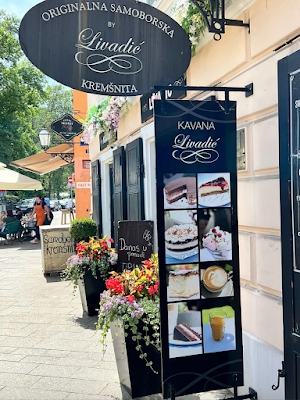 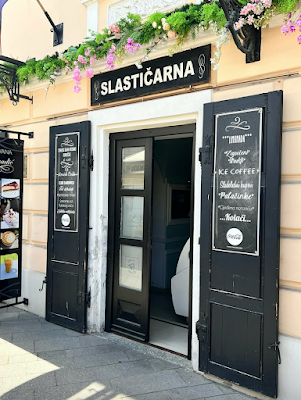 We didn't have dessert at the restaurant as we had other plans, to try one of the local specialities, Samoborska kremšnita. We stopped at a cafe in the Kavana Livadić, a hotel located in a 150-year old building. The cafe sells a variety of sweet treats, but we were there for the kremšnita. The origins of this dessert are unknown, although it's likely that it was first created in Austria-Hungary and it is now known across Eastern Europe and the Balkans, under a variety of different names, such as cremeschnitte, cremșnit, kremna rezina, krémes, and napoleonka.
Although it's made differently in all of these countries, its common base is a puff pastry and custard cream. In Croatia, there are two main types, the Samoborska kremšnita and the Zagrebačka kremšnita. Samoborska kremšnita has a puff pastry top (and bottom), topped with powdered sugar, and filled with custard cream. It's believed that this kremšnita recipe was created in the 1920s by confectioner Đuro Lukačić, who previously worked in Vienna and Budapest. In January 2021, Samoborska kremšnita received the status of "intangible cultural property" and was entered into the Register of Cultural Goods of the Republic of Croatia. 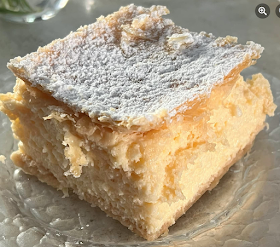 I received a good-sized piece of Samoborska kremšnita (16 kuna/about $2.25), and it was absolutely delectable. The puff pastry was flaky and crisp, while the custard filling was rich and flavorful, as well as only mildly sweet. It was a lighter dessert than expected, and I easily understand its popularity.
There are plenty of other places in Samobor which also make kremšnita, and I'm sure people have their personal favorites. I'd like to return to Samobor some day and do a kremšnita crawl, tasting it at various cafes, bakeries, and such, to ascertain the differences and find my own personal favorite. I'd also like to try Zagrebačka kremšnita, a different version which is topped with whipped cream and a chocolate glaze. 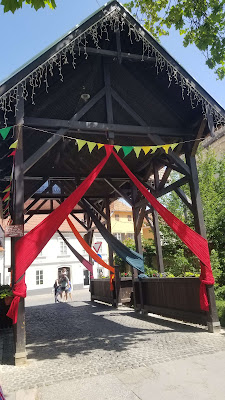 We made one other stop in Samobor, at the Podrum Filipec, where we learned about and tasted Bermet, Muštarda, and more, but that is a tale for another article.
(Please note: Photos #1-3, 5, & 9 are courtesy of Todd Godbout)
Richard Auffrey at 8:48 AM
Share