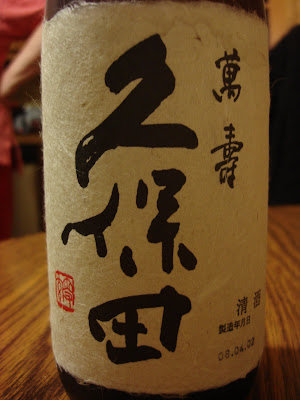 The Japanese have some beautiful terms for drinking Saké under a variety of different circumstances. On Tuesday evening, it was snowing, the large, fluffy flakes gently falling outside my window. So I decided to open a bottle of Saké and drink it as I watched the snow fall, which is the act of yukimi-zake. A zen moment, as the chilled Saké warmed me and I watched the beauty of nature.

The Kubota Manjyu Junmai Daiginjo ($75-$90) is produced by the Asahi Shuzo brewery, located in the Niigata Prefecture. The brewery was founded in 1830, and is a relatively small brewery, producing just over 180,000 liters of Saké annually. They specialize, producing only junmai ginjo and daiginjo. They were a pioneer in producing fine Saké, such as being one of the first to use stainless steek tanks. Their website states: "We brew Saké for sipping, not Saké for drinking, nor Saké for selling."

This Saké was originally named Asahiyama, but in 1985, the name was changed to Kubota. This was a brewery nickname, and means "sunken rice paddy." As for Manjyu, it is a composite of two words, "man" and "jyu." Man means "ten thousand" and jyu (or "ju") means "celebrations" or "congratulations." So, it is roughly translated as "10,000 celebrations." There are other Kubota Sakés, such as the Senju ("1000 celebrations") and Hyakuju ("100 celebrations").
Though this Saké is a Junmai Daiginjo, a top quality grade, that is not listed on the label in English. The quality grade is listed on the label in Kanji, but that won't help most English speakers. I am not sure why they chose not to place it in English on the label, as it would likely make it more difficult to sell to a customer that did not know it was a daiginjo, especially concerning its high price.
To qualify as a Daiginjo, at least 50% of the rice must be polished away, but this Saké went even further, polishing away about 65% of the rice. The rice used was Gohyaku Mangoku, and the Saké has an alcohol content of 15%-16%. It also has a Saké Meter Value of +2, which makes it essentially neutral between dry and sweet. The brewers of this Saké say, "Treat it kindly, softly."
This is a sublime Saké, something which is going to impress most Saké lovers. It is very clear in color, almost like water, and has a subtle nose of floral aromas and melon. It was lightly creamy in my mouth, with a clean, elegant and smooth taste. It is subtle and complex, definitely something to sip and savor, pondering the flavors that flit about your mouth. An exceptional Saké which just dazzled me. I cannot recommend this enough, and it is worth its high price.
Let the snow keep falling, and I will just keep drinking the Kubota Manjyu.
Posted by Richard Auffrey at 5:00 AM

Where can I buy this sake in Los Angles or Orange County, CA?

Sorry, I don't know that area well. You might want to try True Sake in San Francisco, who can probably ship to you.

Because "mom jeans" should not exist! said...

Got a bottle of it a year ago from my Niigata friend. I didn't drink a lot of sake in my life but maniju kubota sake for me is the best sake in the world! :-)

Searchng for the information of this Sake , I ran into this blog,,
Thanks for your detaied tasting note,,
Reading your note, I pictured myself "sipping" the liquor while seeing the snow fall
Sake Fantastico!!!

I really can't wait to sip the Sake, which I bought yesterday in Fukuoka Airport only for 3600 yen (about 35 dollars)..excited...

Anyway,,I have to let you know exactly what ManJu means..
Your explanation of 10000 celebratios is not bad..but In Asia ..Manju comes from an idiom "Manju Mukyu (万寿無窮)" which means Longevity without disease ..

Manju means you live long enough to have 10,000th birthday..
Not just celebration but birthday celebration ...

Thanks DK for your kind words and the info you provided. Kanpai!