Feeding the Dragon: A Culinary Exploration of China 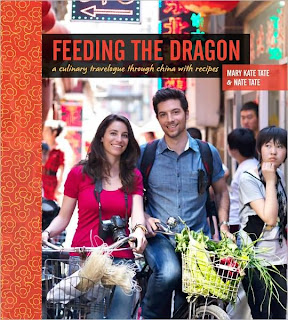 This year, Chinese New Year falls on January 23, and it heralds the Year of the Water Dragon. Dragons are very passionate (glad to hear that!) and 2012 is poised to be a year of excitement and unpredictability, an excellent year for starting new projects. So, this is a perfect time to review a cookbook that presents some intriguing information on the culinary realm of China, especially when that book's title touches on a Dragon.

Feeding the Dragon: A Culinary Travelogue Through China with Recipes, written by Mary Kate Tate and Nate Tate (Andrews McMeel Publishing, October 2011, $24.99), is a trade-sized paperback of 290 pages. Mary and Nate are siblings, both with a passion for China, especially its culinary offerings. Their passion led them to undertake a three-month, 9700+ mile backpacking trek across China, visiting 18 provinces and territories. They had to economize on their journey, traveling by various modes from trains to donkeys, and spent their time immersed in the culture and food of China. To document these travels, they began a blog, Feeding the Dragon, which has developed into this book.

The book is a combination travelogue and cookbook, broken down into 9 sections by region, including Beijing, Shanghai, Fujian, Hong Kong, Macau, Yunnan, Tibet, Sichuan and Xinjiang. Each of these regional chapters has a few short essays, from historical to cultural, about that region. The topics are diverse, covering such items as dim sum, eating dog meat, yaks, dining with monks, pandas, the lion dance, and much more. These are interesting essays, providing glimpses into the diverse personalities of the various Chinese regions as well as insights into the personal experiences of the authors. These articles could encourage and motivate readers to seek out additional information, to peer deeper into the topics.

Each regional section also contains recipes, usually 10-15 per region, for a total of over 100 recipes, spanning the range from appetizers to desserts, and including several beverages too. Some of the recipes will sound familiar to most readers, like Hot and Sour Soup, Soup Dumplings, Dan Dan Noodles, Chicken Lettuce Cups, and Kung Pao Chicken. But, these recipes are intended to be more authentic, and might not be similar to what you eat at some local Asian restaurants. For example, the Hot and Sour Soup contains some less common ingredients such as lily buds and black tree ear fungus. There are also some more intriguing and less common recipes, such as Macanese Crab Curry, Dragon Fruit Sangria, Tibetan Noodle Soup, Uighur Roast Chicken and Popiah Rolls. There is something for everyone, no matter what your preferences.

Overall, the complexity level of the recipes appears to be Easy to Moderate, and the most difficulty might be finding some of the ingredients unless you go to an Asian grocery store. Each recipe begins with a paragraph or two that gives a bit of background or a story about the recipe. Recipes are better with some context and I am glad they added that information. A fair share of the recipes have accompanying and appealing photos of the dishes. The final sections of the book include a chapter on Cooking Basics, such as how to season a wok, how to stir fry, and dumpling folding tips, as well as a Glossary of ingredients.

The Tates have written a fascinating culinary survey of China that does not endeavor to be comprehensive. It is more a sampling of recipes from different regions, providing some authenticity for home cooks. I like the fact that it is more than just a collection of recipes, but also includes brief essays about Chinese culture and the author's travel experiences, giving the reader more context as well as making the book, as a whole, more interesting. The book is aesthetically pleasing, with numerous beautiful photos of not only the dishes, but also of the people, places and items of China.

With Chinese New Year coming soon, why not pick up this book and prepare some of the recipes to celebrate the Year of the Water Dragon. It is a great time to start a new project, like learning how to prepare some Chinese dishes.
Posted by Richard Auffrey at 4:00 AM