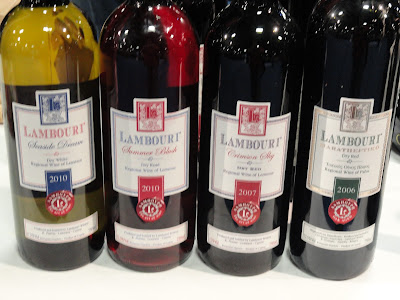 At the Boston Wine Expo, I had the opportunity to taste some wines from the island of Cyprus, located in the Eastern Mediterranean Sea and east of Greece. I believe this was the first time I have ever tasted wines from this country, primarily because I have not seen their wines available at local wine stores.

Wine production in Cyprus has a lengthy history, extending back at least over 4300 years and possibly even over 5500 years. At least one of their wines, a sweet wine now known as the Commandaria, has been famous for nearly 3000 years and is still produced today. In more modern times, their wine industry languished throughout much of the 20th century until the 1990s when there was a major push to modernize and improve the quality of their wines. So, despite its long history, in some respects it still is has a young wine industry.

In 2007, a new Appellation of Origin system was established in Cyprus, based on European Union law, and there are three categories including Table wine, Local wine, and O.E.O.Π. (their top designation). There are four designated Local areas allowed, including Lefkosia, Lemesos, Larnaca and Paphos, and 85% of the grapes for a Local wine must come from one of these regions. Wines with the O.E.O.Π. designation have a number of regulations and restrictions, including a minimum altitude for the vineyards, yield restrictions, ageing and more. There are about 120 indigenous grapes in Cyprus though only a small number are actively used in wine making.

The history of the Lambouri Winery, located in Platres which is about 1128 meters above sea level, extends back over 300 years. They are a small, boutique winery which produces about 75,000 bottles annually and also grows only certified organic grapes. The winery presented six wines at the Expo, a sampling of different types and styles.

First up was a white wine, the 2010 Seaside Dream, a blend of Xinisteri and Riesling. Xinisteri, also spelled as Xynisteri and Xynistery, is an indigenous Cypriot white grape grown in about 13% of their vineyards. Xinisteri can produce aromatic wines with a bit of earthiness. I found the flavors of this wine to be more subdued, with a blend of citrus, green apple and minerality, but no earthiness. But, there was a certain exotic element to the taste, a bit indescribable but which elevated this wine above comparable wines.

Next, I tasted their 2010 Summer Blush, a Rosé blend of Grenache Noir and Maratheftiko, another indigenous Cypriot grape. Maratheftiko is an ancient grape variety, possibly the second oldest grape in the world, which is only recently starting to be planted more in Cyprus. It is known to possess high acid and high tannins, as well as be difficult to grow. This Rosé had a strong pink color and a pleasant and subtle red fruit aroma. On the palate it was dry, with flavors of strawberry and raspberry as well as some light herbal notes. An Old World style Rosé, this is the style I enjoy and would recommend this wine.

The 2006 Maratheftiko is produced from 100% Maratheftiko and has spent about 12 months in oak, a combination of new and old, French and American. Though it is about five years old, it is still a young wine and really needs another 5-6 years of ageing. With a medium red color, this dry red wine provides a complex taste of red fruits, mild spices and a certain exotic flavor. It is fairly tannic now, and definitely needs some time but I feel it has potential.

The 2007 Crimson Sky is a blend of Mouvedre, Mavro and Cabernet Sauvignon. Mavro is another ancient and indigenous Cypriot grape and its name simply means "black." It is also the most widely grown grape on Cyprus, accounting for about 70% of all vines. In addition, the vines are grown on their original rootstock, and have not been grated with North American rootstock. This was another delicious wine, with only moderate tannins, and a pleasant melange of cherry, strawberry, blueberry, spice and herbal notes. It did not present the same exotic profile as the other wines, but was still a very good wine. 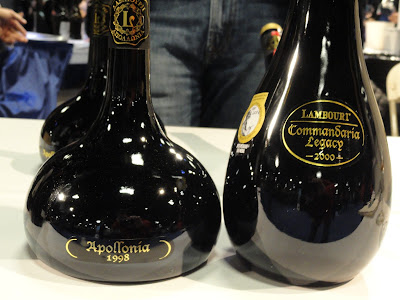 Lambouri also presented two compelling dessert wines. The 1998 Apollonia is a late harvest wine, a blend of 50% Mavro and 50% Xinisteri. It is aged for at least 5 years in oak, which is set out under the sun, and it has an alcohol content of 14.5%. It had a beautiful amber color with an alluring nose of honey and flowers, with a sweet taste, balanced by nice acidity. Its honey flavors were complemented with some herbal touches, and it had plenty of complexity and a satisfying, lengthy finish.

Finally, there was the 2000 Commandaria Legacy, the second oldest named wine in the world still in production. It is also is a late harvest wine, a blend of 50% Mavro and 50% Xinisteri, but the grapes spend about 9 days drying in the sun. A dried grape wine, known as Cypriot Manna, was first described in 800 BC by the Greek poet Hesiod. In the 13th century, Cyprus became the base of operations for the Templar Knights and there estate was known first as Gran Commanderie and then later Commandaria. They exported a dried grape wine known as Commandaria and it became quite famous. I found this wine to be even more complex than the Appolonia, with additional flavors of butterscotch, raisins and earthy hints. An amazing wine which I highly recommend.

My initial experience with Cypriot wines was very positive, and you should check out the wines from Lambouri Winery. I definitely want to explore more Cypriot wines.

Update 1/25/12: I just learned that The Spirited Gourmet in Belmont will carry some of these wines, including the 1998 Apollonia and 2006 Maratheftiko.
Posted by Richard Auffrey at 4:00 AM

This evening I will try Gaglioppo from Statti. Another Lesser known Italian red wine. http://www.bostoniano.info/?p=4515&preview=true

The right link is this http://www.bostoniano.info/2012/01/23/new-challenge-for-less-known-italian-wineries-in-massachussetts/ sorry