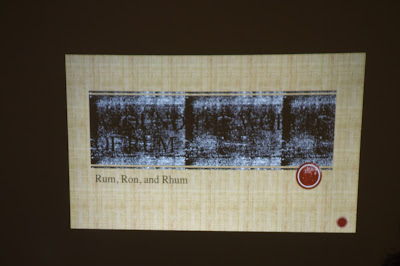 As I wrote the other day, Rum may be one of the most under-appreciated spirits, something which is most likely to end up in a cocktail rather than sipped on its own. At Thirst Boston, I attended two Rum seminars, one of which I already posted about and now I'll discuss the second one. The Mount Gay Rums I previously discussed were more British style rums while Rhum Agricole is more French style, and a rather unique form of rum.

I attended the seminar The House of Agricole Rhum, which was described as "... a special presentation on the world of Rhum Agricole. No rum better expresses the sought-after ideal of terroir than the French Caribbean’s Rhum Agricole. Many of the finest examples come from the islands of Martinique and Guadeloupe, including those produced by Rhum Clement, Rhum J.M., and Damoiseau. The Clément family has a significant role in the long history of the islands and the production of Rhum Agricole, ..." This discussion also included a tasting of six different Rhums, from three different producers. 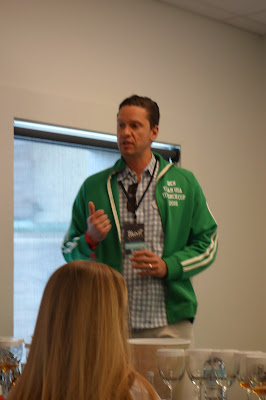 The presenter for this seminar was Benjamin Melin-Jones, a fourth-generation member of the Clément family, and the Regional Director USA for the Rhum brands Clement, JM and Damoiseau. His mother is from Martinique and he has been passionate for Rhum for most of his life. His passion for Rhum was infectious and he presented plenty of information about rum in general, as well as more specifics on Rhum Agricole.

We began the seminar with a cocktail, Ti' Punch, which basically means "little punch." It is commonly consumed in the French-speaking areas of the Caribbean and is traditionally made with white Rhum Agricole, lime, and cane syrup. It is simple to make, highlighting the Rhum. It is said that it originated with field workers who began the day with this punch, their first caloric intake of the day. Now, it is often an aperitif before meals, as well as the drink you give to welcome people into your home. It was a delicious way to begin the seminar.

Benjamin then started telling us that it was the time for a rum revolution, or maybe it might be better to be considered a reorganization. Now is the time that rum should make a new ascension, a time to better delineate rum styles and educate consumers about the diversity of rum. It can be confusing and many liquor stores don't help as they fail to organize rum by style, rather simply lumping it all under the general Rum banner. It may be the third largest spirit category in the world, yet it still is under-appreciated and its reputation needs to be enhanced. Though the Caribbean makes about 80-85% of all rum, the Philippines actually make the largest rum brand in the world and India too is a major rum producer.

To help educate consumers, Benjamin worked with a team to create a Rum Tasting Wheel, which was inspired by the whiskey tasting wheel. The Rum wheel is divided into three different styles: French, English and Spanish, and lists the general geographic locations which fall under each style. In addition, the wheel provides the basic ranges of flavor profiles you will find within each style. He told us that the wheel isn't perfect but it is a good start and will be helpful for many people.

The Spanish territories were the first to engage in a significant commercial trade in rum, who the British at the time were primarily consuming it on their own. Spanish rum tends to be lighter in style, easy to drink, with lots of white rums. During Prohibition, there were numerous advertisements recommending that Americans travel to Cuba where they could purchase alcohol, primarily rum. This led to many Americans acquiring a taste for rum, even after Prohibition ended. Benjamin stated that the Mojito is best with Cuban rum and that a French style rum would make a very different Mojito.

The British Navy used to supply its men with rations of rum, and eventually they would add water and lime to help prevent scurvy. The Navy also would test rum on gunpowder to determine the amount of alcohol in it, which eventually led to the creation of "proof" as a designation of alcohol content. However, nowadays, it is basically the Americans who use proof while the rest of the world uses degrees of alcohol. British style rum tends to be bold and rich. A Mai Tai a usually a mix of Jamaican rum and Rhum Agricole.

French style rum, Rhum Agricole, is very different as it is made from pure sugarcane juice rather than molasses. As such, it is a terroir driven spirit, which molasses-made rums are not. It is said to be a Grain to Glass spirit, which can be made from a variety of different sugarcanes. When the sugarcane is harvested, the cane is crushed the same day, a fresh pressing. Rhum is not permitted to add anything to change the color, though other rums are permitted to add caramel. On Martinique, a solera method is used by some producers, replacing rum lost to the angel's are with new, younger rum.

The Father of Rhum is said to be Homère Clément, though he wasn't the first to produce Rhum. In the late 1800s, Martinique was undergoing a sugar crisis, as the rise of sugar beets was negatively affecting their sugarcane industry. Homère Clément, a doctor, became a mayor on Martinique at this time and in 1887, he purchased a 43 hectare sugar plantation, Domaine De L'Acajou, and transformed it into a successful Rhum producer, Clement Rhum.

Benjamin mentioned that in Tiki cocktails, there is often a mix of 2 different rums and that might be the only spirit in which that regularly occurs in cocktails. You generally don't see cocktails that call for multiple types of tequila or vodka. He also suggested that you should use rum as a substitute for other spirits in classic cocktails. Substitute rum for vodka in a Bloody Mary or for tequila in a Margarita.

For the tasting component, we had 6 Rhums, three White and three Aged, and Benjamin noted that with Rhum Agricole, the nose should always match the taste.

We began with the Rhum Clément Canne Bleue, which might be the only single varietal Rhum in the world. It uses 100% blue sugarcane, which is supposed to be juicy and flora, but with low yields. Single varietals are not very economical and Clément only makes very small batches. This Rhum ages for about six months in stainless steel. At 100 proof, this Rhum had a pleasant blend of flavors, with citrus, grassy notes, a little briny element, and touches of black pepper. There was a certain sweetness to the taste as well. Very interesting.

Rhum JM was founded in 1845 on Martinique by ,Jean-Marie Martin, a merchant, who started a distillery, branding his initials, JM, on the oak barrels in which he aged his rum.  Located on the north of the island, their sugarcane is grown on the slopes of a volcano. The Rhum JM Blanc possessed an intriguing and layered blend of herbal, tropical fruit and citrus flavors. The flavors seemed a bit more intense than the Canne Bleue. Another tasty Rhum.

Rhum Damoiseau was established by Roger Damoiseau in 1942 in Guadeloupe. The Rhum Damoiseau Blanc was 110 proof, was unfiltered and had been distilled only once. It had the most different flavor profile of the three white Rhums. It was savory and vegetal, with a strong earthy aspect. There were only hints of fruit and it also possessed a long, earthy finish. I very much enjoyed the more unique flavors of this Rhum though it certainly wouldn't appeal to everyone. Highly recommended.

We then moved onto the VSOP Rhums, which are aged for at least four years, and due to the greater temperatures in the Caribbean, it is roughly the equivalent of a 12 year old bourbon.  As such, these Rhums are a very good value.

The Rhum Clément VSOP is aged for about one year in French Limousin oak and then another three years in re-charred Bourbon barrels. At 80 proof, this Rhum presented an intriguing blend of flavors, with caramel, honey, tropical fruit, and a spicy finish. It was smooth and elegant, with a lengthy finish and definitely a Rhum to slowly savor.

The Rhum JM VSOP has a slightly different aging program, starting out its first three years in re-charred Bourbon barrels and then transferring into lightly toasted new American oak barrels for another year. At 86 proof, this Rhum had a little more heat, presenting tasty flavors of bananas, honey, toffee and plenty of spice, especially some baking spices. This Rhum was also smooth and elegant, with a lengthy finish with a bit more sweetness.

Our last sample was the Rhum Damoiseau VSOP, which is mainly aged in ex-Bourbon barrels though they don't say much about their barrel program. This Rhum has a touch of sweetness but presents more dry with flavors of dried fruits, caramel, black pepper, toast, vanilla and a touch of plum. It was the most different of the three VSOPs, but equally as delicious and interesting.

What Rhum Agricoles would you recommend?
Posted by Richard Auffrey at 3:00 AM