Craft distilling is booming all across the country, and a significant number of these new, small producers are creating some delicious and interesting spirits, from whiskey to rum, gin to brandy. TasteCamp originated as a weekend-long immersion into lesser known wine regions, having visited areas including Long Island, the Finger Lakes, Quebec, Virginia, Niagara and Vermont. Over time, the concept of TasteCamp has evolved, so that not only do we explore wine, but we now also explore local beer, ciders, spirits, and food.

About 30 or so writers and wine industry people recently attended TasteCamp 2017, which was held in Maryland. Once again, we visited wineries, breweries and distilleries, sampling much of what Maryland has to offer, and I found much to enjoy. In downtown Frederick, one of our visits was to the McClintock Distilling Company, which only opened in December 2016. Despite its youth, I was impressed with their concept, objectives, and existing products. This is certainly a distillery with a bright future ahead of it. 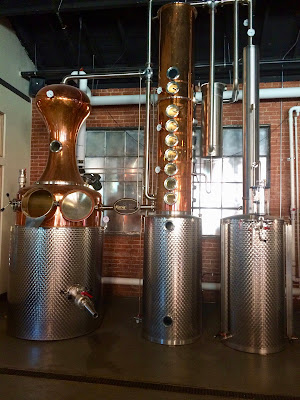 In December 2014, the city of Frederick amended their city code and permitted small, craft distilleries to operate in the downtown area. Only a few distilleries have so far opened in Frederick but you'll likely see more in the near future. Tyler Hegamyer and Braeden Bumpers, who both graduated from Elon University, had an interest in producing spirits, and received some education and training in distillation at Cornell University and the American Distilling Institute.

On the site of an old mechanic's garage, they chose to open McClintock Distilling Company, which includes a distillery and tasting room. The distillery was named after McClintock Young, a famous inventor in the 19th century, who had over 100 patented inventions. With a passion for innovation, he also owned one of the first foundries in Frederick. And it is that passion for innovation which has inspired Tyler and Braeden. 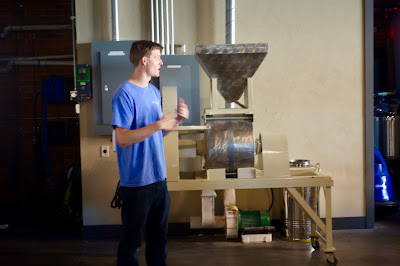 The distillery uses only 100% certified organic ingredients and hopes to soon become a certified organic distillery. They currently use about 120 tons of grain annually, acquiring whole kernel grains from Ohio, Indiana, Kentucky and Ontario. Though they would like to use local grains, those grains still need to be organic and Perdue farms purchases most of the grain in Maryland. Their long term goal is to purchase as much local, organic grain as possible.

I was fascinated to learn that McClintock grinds all of their own grains, using a stone burr mill which once was used by an old bakery. They might be one of only two distilleries in the U.S. to use a stone burr mill. Also known as grist mills, they are able to grind grains into a fine flour which doesn't cause the grains to heat up, and also helps the flour maintain the flavor. This makes their distillery more unique, and could lead to a more flavorful end product. It also helps them keep quality control of every aspect of the process. 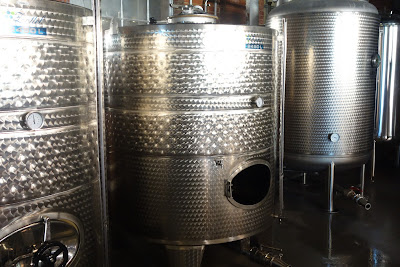 The milled grains pass directly into the mash tanks, which prevents oxidation. They have three fermenters, and the usual, full fermentation takes two days, using a proprietary distillers yeast. As they are very concerned with sustainability, and wish to be waste neutral, they use a closed loop cooling system, which reuses the water that chills the mash tanks. In addition, after fermentation, the spent grains are sent to local farms as pig food. I'm sure those are very happy pigs. 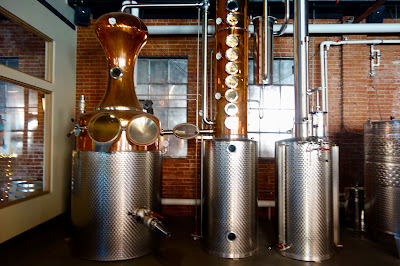 McClintock's stills, including a pot and column still, were created by Kothe Distilling, a renowned German company, and were made with lots of copper, which benefits distillation. On the left side, you can see their 1000 liter pot-column still. 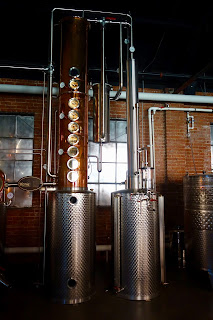 Their column still has an attached Vapor Basket that allows them to better produce their gin, as they place all of the botanicals in the basket. This helps to better extract the flavors in those botanicals.

They currently have three products for sale, a Vodka, Gin and White Whiskey, and have been aging some of their spirits in 30 gallon barrels. They believe they will age their spirits for about 1-1.5 years before they are released for sale. For example, they have some used Hennessy Cognac barrels in which they are aging some of their gin. I had the chance to taste two barrel-samples, and they definitely show potential. I am very intrigued to see how they taste once the aging is complete. 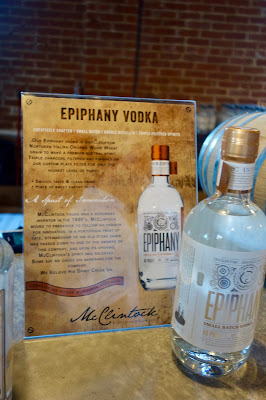 The Epiphany Vodka ($28) is made from Northern Italian organic white wheat, and was double distilled and triple filtered. It has a relatively smooth and clean taste, with a hint of earthiness. Though you could probably drink this chilled, on its own, it probably would be best in a cocktail.  It was my least favorite of their three products, but it is still a good vodka. 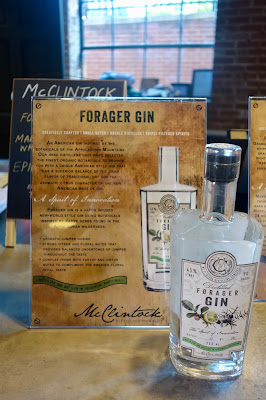 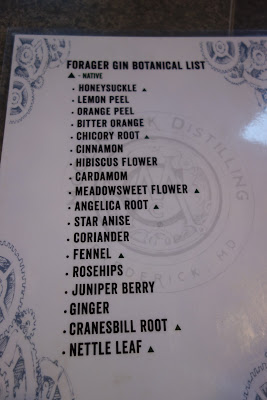 Here is the list of botanicals used to produce this gin. Quite an interesting combination. On the nose, there is a strong juniper aroma with subtle hints of other botanicals in the background. On the palate, the botanical mix is more balanced, and the complex melange of flavors delights the mouth. There are elements of fruit, mainly citrus, and floral flavors, with a sprinkle of spice elements. The gin should be served chilled, and would be delicious on its own, or used in cocktails. I'm not a huge fan of gin, as I find too many overdo it with the juniper flavors, but I really enjoyed the more balanced botanicals in this Forager Gin. Highly recommended. 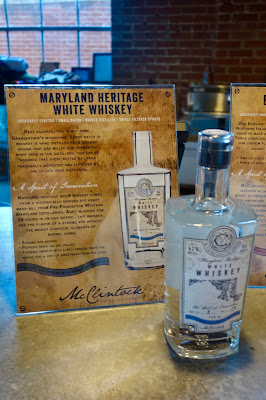 The Maryland Heritage White Whiskey ($34) is made from a blend of about 80% Rye, with the rest being wheat and corn. It has a high rye content, intended to reflect the historic ryes from pre-prohibition Western Maryland distilleries. In addition, the whiskey was aged for about 24 hours in an oak barrel and is 84 proof. As a big Rye fan, this whiskey appealed to be, presenting with plenty of tasty, spicy notes, with a hint of sweetness from the corn. In general, it was smooth and easy-drinking, with only a touch of heat from the alcohol. This would be a nice choice in a Manhattan of other whiskey-based cocktail. Also highly recommended.

McClintock Distilling is on the right path, with passionate owners, who are trying to be sustainable, organic and produce quality spirits. Their initial products were impressive and I see great potential here, including with their aged spirits. I also feel they would be an excellent model for other craft distillers. If you ever get to Maryland, seek out their spirits. And if you have an interest in craft spirits, you should pay attention to what McClintock Distilling is doing.