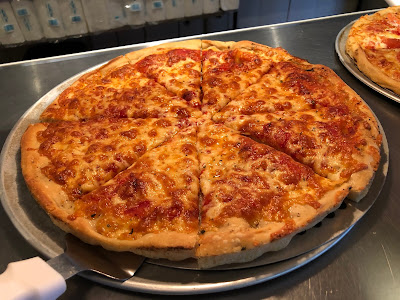 An All-You-Can-Eat Pizza & Pasta Buffet for only $8! It's one of the best deals north of Boston yet  it's rare that you see anyone writing about it.

Why not? Maybe because it isn't a new restaurant and the buffet isn't new either. However, we shouldn't ignore writing about such excellent deals, despite the fact they aren't new and shiny.  As I've said before, food writers tend to write primarily about the new restaurants, ignoring so many good restaurants that have stood the test of time. We need to highlight these older restaurants which still are worthy of our attention.

For 58 years, Prince Pizzeria has been serving pizza on Route 1 in Saugus. If you grew up in the area like I did, you probably visited Prince as a child. I've never stopped going there either, and still regularly dine there for lunch. I go for their pizza & pasta buffet and think it's an excellent deal. For $8, you get all-you-can-eat ziti, marinara sauce, garlic bread, pizza and dessert pizza. Ten years ago, in 2009, the buffet was $5, so the price has only increased a relatively small amount since that time. The buffet is available Monday through Friday, from 11:30am-2pm.

At any one time, there are five different pizzas on the buffet, including a cheese pizza, a couple meat pizzas (like sausage or pepperoni), and veggie pizzas. As soon as a pizza is gone, it's quickly replaced. Their pizza is more unique, and doesn't easily fit into any of the usual pizza categories. It's not Greek pizza or bar pizza, it's not Chicago deep deep or Neapolitan.

When I dine there, owner Steven Castraberti is usually at the restaurant. ensuring everything runs smoothly. He's not some absentee owner, but a man with a passion for his restaurant, a man who takes an active role in its success. The longevity of the restaurant, when so many other restaurants on Rt. 1 have closed over the years, is a testament to the family's dedication.

If you haven't been to Prince Pizzeria in a long time, if at all, then please check it out, especially for their lunch buffet. Hopefully, we will see more food writers too highlighting older restaurants which still are worthy of our attention and patronage. Prince's buffet isn't fancy or exotic. It's just delicious food at a very reasonable price. Maybe I'll see you there!
Posted by Richard Auffrey at 3:00 AM