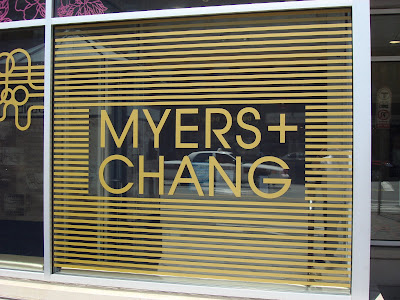 This past Sunday, I returned to Myers & Chang to once again partake of their Dim Sum Brunch. My first experience was delectable so I expected my second visit would be equally as delicious. And I was not disappointed in the least.

I should first note that they have extended the hours of the Dim Sum. It used to be available just on Sundays but now is also available on Saturdays, both days from 11:30am-5:30pm. So you have plenty of opportunity to try their small plates.

The menu had several different dishes from the last time I had been there and I decided to check out a few of them. The Thai Inspired Shrimp Ceviche ($5) was excellent, a bowl with a good-sized mound of shrimp pieces in a citrus sauce with crushed peanuts and spices. A very refreshing dish with clean flavors. The Tamarind Glazed Prawns ($5) also was a plentiful dish, though rather messy as you had to remove the shells which were covered in a sweet sauce. But the server provided lots of napkins and wet-naps to clean up afterwards. The prawns had a very nice taste, once you removed the soft shells. The Garlicky & Spicy Chicken Wings ($5) had a very dark sauce on them that was spicy and rich in garlic flavors. The wings were meaty and tender.

I tried a couple of other dishes that had been on the previous menu but which I had not tasted before. The Braised Short Rib with Asian Pear Stuffed Bao ($4) was superb, tender and flavorful shredded meat with thin, crisp slices of Asian pear. I have thus tried three of their Stuffed Bao and all were delicious. The Thai Ginger Chicken with Rice Vermicelli ($5) was also very tasty. Thin noodles and small pieces of white-meat chicken with a mild ginger flavor.

Another new addition to their brunch menu is that their full dessert menu is now available. They have five choices, each costing $7. I have never tried their desserts before so this was a good opportunity to do so.

I selected the Frozen Vanilla Bean Parfait with Fresh Orange Granita. I was expecting an American style parfait, that tall glass filled with alternating layers of ice cream and fruit. Instead, I received a French version, simple frozen custard made with cream. The dish was quite large, plenty enough for two people to share. There was a large square of the frozen custard, which was creamy and had a strong, delicious vanilla flavor. There are an ample portion of granita too, which was topped with a few slices of orange, Mandarin ones I believe. The granita was cool, refreshing and not overly sweet. And combining the custard and granita gave a creamsicle-like flavor which I really enjoyed. I highly recommend this dessert!
I did chat a little with Chef Barros again, and it sounds like he is hard at work designing new dishes for the menu. I look forward to seeing what he develops next.
I continue to recommend Dim Sum Brunch at Myers & Chang. Enjoy their inexpensive and delicious fare.
Posted by Richard Auffrey at 6:00 AM