Today is Wine Blogging Wednesday #59, an Homage to Kushi no Kami, the god of Saké. For this month's theme, people were to conduct their own kikishu (“Saké tasting”) by selecting any Saké and reviewing it. They could earn bonus points if they reviewed multiple Sakés of different styles or types, as well as if they paired Saké with food. My hope was that people would explore this unique beverage, and maybe gain a better appreciation for it.

For my own kikishu, I have tasted two different Sakés, both which I had bought from Sakaya, the all-Saké store in New York City. I decided on Saké breweries with history, older producers. I also chose two different types, a Junmai and a Junmai Ginjo. Plus, one was a Yamahai. 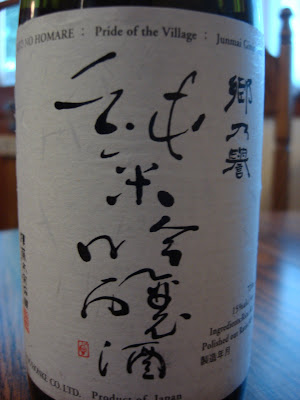 First up is the Sato No Homare "Pride of the Village" Junmai Ginjo ($57.99/720ml) which was brewed by the Sudo Honke brewery in the town of Obara in the Ibaraki prefecture. This is the oldest, still operating Saké brewery in the world, having been founded back in 1146 A.D. It is over 860 years old! Are there any wineries which are that old?

The brewery is currently operated by the 55th generation of continuous family ownership. What a sense of history then when you open a bottle of their Saké. Compared to most producers, the brewery only makes a small amount of Saké each year. Plus, they only produce quality Saké, only Junmai Ginjo and Junmai Daiginjo.

This particular Saké was made from Yamada Nishiki rice, which was polished to 50%. Thus it could qualify as a Daiginjo but the brewery chose to release it only as a Ginjo. This Saké has an alcohol content of 15.1% and a Saké Meter Value of +3, making it a slightly dry Saké. Smelling this Saké, you might be surprised to get aromas of violets, pear and subtle red fruits. Then when you taste it, you'll find it silky, clean and light. The flavors echo some of the smells, though the fruit flavors are more prominent than the floral notes. As you concentrate, you will realize the complexity of the taste and with its lengthy finish, you will have plenty of time to ponder over the flavors. This is an elegant Saké yet with some body. An exceptional example of the great potential of Saké. This should appeal to anyone.

I drank this with a roasted chicken dish and think it paired up well. The Saké was not overpowered and it was hearty enough to stand up to the food too. It seemed to refresh my palate, while its flavors helped to complement the savory spices on the chicken. I would not have paired this Saké though with a spicy hot dish. 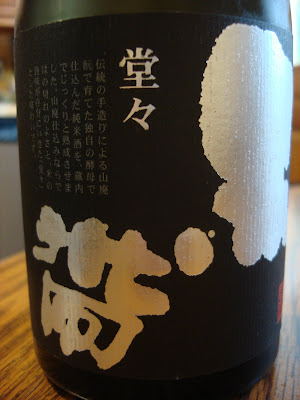 Next up was the Kuro Obi "Black Belt" Do-D0 Junmai Yamahai ($41.99/720 ml) which was brewed by the Fukumitsuya Saké brewery in the Chubu region of the Ishikawa Prefecture. The brewery was founded in 1625 A.D., so it has over 380 years old of history. They make only Junmais though they make a variety of different brands.

This particular Saké was made from Yamada Nishiki and Kinmon Nishiki rice, which was polished to 65%. This Saké has an alcohol content of 15% and a Saké Meter Value of +5, making it a dry Saké. What makes this Saké more unique is that is it a Yamahai. That means that the brewer uses native yeasts, those just floating in the air of the brewery. It is very risky though so very few brewers make this style any more. Yet when they succeed, a Yamahai can be rich and acidic, much more like a red wine.

This Saké had a pale, yellow color to it and an earthy nose, maybe some mushroom and almost a slight milky smell. It was a rich, full-bodied drink with pronounced earthiness and a certain creaminess to it. It was a more unusual taste, certainly very different from the fruity Sato No Homare. It seemed more rustic, which could very well be due to the use of native yeasts. I enjoyed this for its more unusual taste though it probably would not appeal to a newcomer to Saké.

Thanks to everyone who participated in WBW#59 and I will endeavor to get the summary posted as soon as I can. Thanks as well to Lenn of Lenndevours: The NY Cork Report for allowing me to choose this theme as well as for starting the whole idea of Wine Blogging Wednesday. I hope everyone enjoyed the theme, maybe learned a thing or two, and hopefully there were a few converts to Saké.
Posted by Richard Auffrey at 6:00 AM

Thanks for the great theme, Richard, and I'm looking forward to reading the other posts. Here's mine: http://goodwineunder20.blogspot.com/2009/07/wine-blogging-wednesday-59-homage-to.html

With just 3 minutes left of Wednesday, here is mine! http://www.strumerika.com/2009/07/08/wine-blogging-wednesday-59-homage-to-the-god-of-sake/
Thanks for hosting