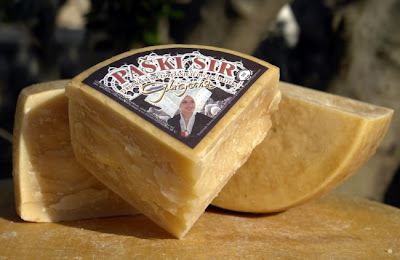 Cheese is such a delicious, diverse and versatile food.  So many dishes are enhanced by the addition of cheese, but it can be great on its own too. Cheese, bread, maybe some membrillo or fig paste.  Over the holidays, there were plenty of cheese plates, and I contributed to a few of them, letting friends and family sample some Paški Sir, a Croatian cheese.

Unfortunately, you can't currently find Paški Sir at your local cheesemonger. But that should change soon as several importers are interested in carrying this unique cheese, and they definitely should bring it into the U.S. I don't think I have ever tasted a cheese from Croatia before, and had never heard of the Paški Sir. So I was very interested in receiving a sample of the cheese.  It was a big hit with myself, my family and friends.

The Republic of Croatia includes numerous islands, including Pag, a small island with a population of around 5000 people, as well as about 40,000 sheep.  Pag has a long history of agriculture, cheese making and salt production.  Paška Ovca, Pag sheep, are small animals, with thick winter coats which help protect them from Pag's harsh winter conditions. They dine upon the herbs and grasses of the rocky hills, and it is this vegetation which  affects their milk, and thus their cheese.

Pag is subjected to the Bura, a powerful, cool and dry wind which whips up seawater, dries it out, and then drops sea salt over the pastures.  Many wild herbs also grow on the island, surviving the harsh conditions, including Wormwood, Rockrose, Mint, Immortelle, Lavender and Dalmatian Sage.  The sheep devour the salt-laden grasses and herbs.

Paški Sir (translated as "cheese from Pag") is a hard, sheep's milk cheese, and the first recorded mention of it was in 1774. Undoubtedly, it was produced long before 1774, but by that time it had garnered some fame outside of Croatia. There are several dairies on the island which now produce Paški Sir, and I had the opportunity to taste some cheese from the Gligora Dairy.

The story of Gligora Dairy is an admirable tale of success, one worthy of recognition.  The dairy was founded by Ivan Gligora, who came from a long line of cheese makers.  Ivan got a scholarship to the Zagreb Creamery, where he eventually worked for about twenty years as a renowned dairy technologist.  During the early 1990s, Ivan moved back to Pag, eventually opening a small dairy, Sirana Gligora ("Gligora Dairy").

It was not long before his cheeses started winning many accolades.  In 2010, he constructed a new and larger dairy and Ivan's son, Sime, contributes to the success of their cheesemaking.  The Dairy annually produces over 50 tons of Paški Sir and over 150 tons of other cheese products. His cheeses continue to win many awards and now they are preparing to enter the U.S. market.

Paški Sir is is made from 100% ewes milk, and is aged for a minimum of six months in a limestone cave, and they have some cheeses that were aged for 12 and 18 months. The older the cheese, the stronger the flavors and the longer the finish. It is yellowish in color and has a smell of grass and herbs.  The taste is complex and intriguing, with a melange of herbal flavors, a mild creaminess and hints of salt. It pairs well with fruit pastes like quince and fig.

I very much enjoyed the taste, and my family and friends also liked it very much.  If you like hard cheeses, with plenty of complexity of flavor, then you will surely like Paški Sir. Hopefully you will soon be able to find it at your local cheese shop.
Posted by Richard Auffrey at 4:00 AM

Yum! This sounds like something I'd love to try. Boston's cheese scene has changed so dramatically from just a decade ago, largely thanks to a small number of hardworking enthusiasts.

I haven't been to Pag itself, but have hiked extensively around many of the surrounding islands. I'd recommend Croatia as a foodie destination far superior to Italy since it retains the diversity of cuisine (much of it Italian!) that Italy itself has lost in its evolution towards a tourist mecca Olive Garden.

What a fabulous, informative post! Would love to try it! I would think cheese would be an integral part of the food culture in that part of the world. Hope that some of it makes it this way.

What a fabulous, informative post! I would think cheese would be an integral part of the food culture in that part of the world. Hope that some of it makes it this way-- would love to try it!