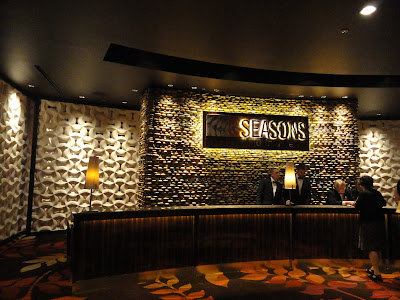 Eating at a buffet requires proper strategy, or you might get overwhelmed by salad and bread, failing to later enjoy the diverse and delicious entrees that are offered. As commedian John Pinette says, "Salad is the promissory note that food will come." With 100-200 items available on a buffet, you must be very selective as you certainly won't be able to taste everything. And there is little sense on bulking up on any single item, and thus missing out on so much more.

Last week, I attended the private ribbon-cutting ceremony for the newly expanded and renovated Seasons Buffet at the Mohegan Sun Casino. After that event, the Seasons Buffet opened on July 1 to the public, after having been closed for about six months.  At a cost of about $10 million, the renovations involved removing basically everything that had once been at the restaurant, replacing it with more state-of-the-art equipment.  The space was also enlarged, so that it now covers about 26,000 square feet and seats almost 800 people. Thirty employees were added to the staff and it will now be the only buffet at Mohegan Sun. 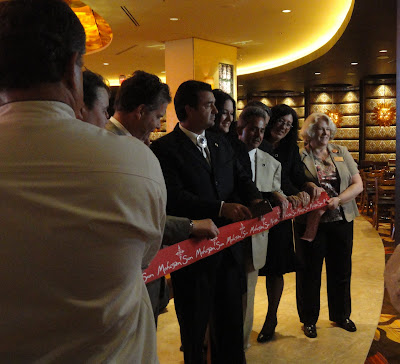 Prior to the ribbon cutting, as we sipped Champagne, a couple members of the Mohegan tribe spoke about the new changes. A good luck ceremony was also performed, which they conduct before all new endeavors, involving the burning of sage and a prayer in both English and Mohegan. As it is a smoke-free restaurant, the sage burning is the only time smoking will be permitted there.

The comedian John Pinette, well known for his jokes involving buffets, also entertained the crowd, providing his own rules for attending a buffet. For example, he stated that skinny people browse at a buffet, and that is just wrong. The proper action is "grab and move," and if you later find you don't like what you took, just spit it out and get something else. One of the funniest bits was unintentional though, as John mistakenly said he was at Foxwoods rather than Mohegan.

Then the ribbon was cut, and the media and VIPs were permitted into the restaurant, to partake of the buffet. These guests seemed to fill less than half the restaurant, so though there was an initial crowd swelling at the buffet stations, it soon lessened and there was nearly no wait at any of the stations. 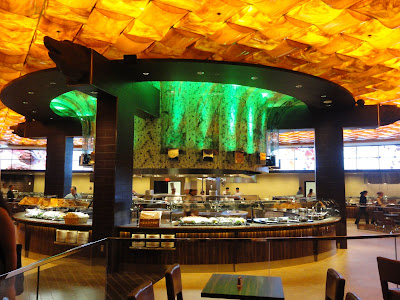 The buffet room is quite stunning, with a brightly colored ceiling, wolf head sculptures, and multi-shaded colored tiled columns. It is still a casual restaurant, but visually very appealing which adds a little elegance to the destination.  The 250-linear-foot serving line can display over 200 different items. The buffet is open seven days a week, for breakfast ($11.75), lunch ($19.75) and dinner ($23.50).  I believe these are reasonable prices for the amount of food available at the buffet, and the prices are certainly less than many other similar buffets. 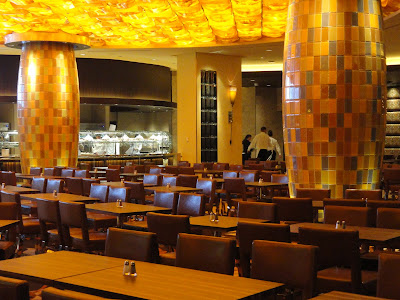 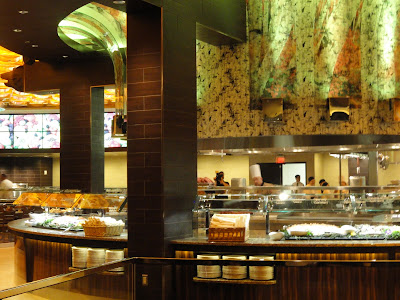 There will also be a soda system which will eventually offer 100 plus beverage flavors, though it will likely start out with only about 20 different flavors, continually adding new flavors over time.  Beer and wine will be available though I am unsure whether spirits and cocktails will also be available. 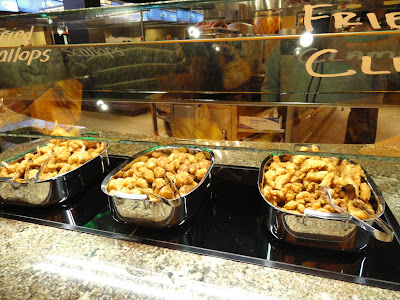 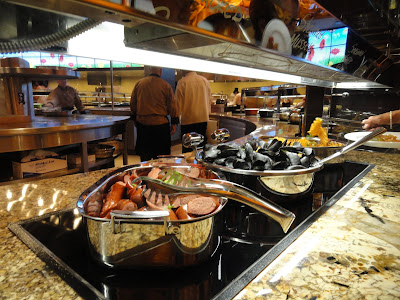 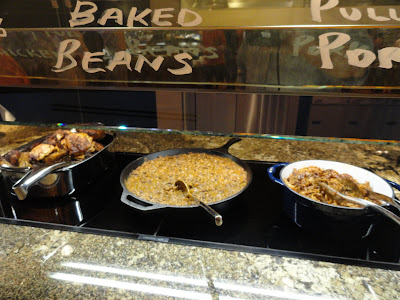 For this event, it does not appear that the buffet was up and running as completely as it would be normally. Not all of the buffet space was being used, and servers were also walking around the dining area offering samples of some foods which were not on the buffet, including clam chowder, pepperoni frittata and meatballs. Thus, my experience was but a glimpse into the potential of this buffet, and may not be indicative of how the buffet will usually operate. I'll have to return to get a better idea of how the buffet normally runs.

Overall, most of the food was tasty and fresh, and they did especially well with their BBQ dishes. There was plenty of diversity, so every diner could find plenty of food they would enjoy. No one is going to leave the buffet hungry. My primary complaint, which is a common problem at many buffets, is that much of the food was only luke warm. For example, the fried clams and scallops were kept in large pans and were almost room temperature. Supposedly, when the buffet is operating normally, they will offer small portions of all their dishes so that the food will remain hotter longer.  I hope that does occur. Plus, with normal crowds at the buffet, the pans and trays should empty quicker. 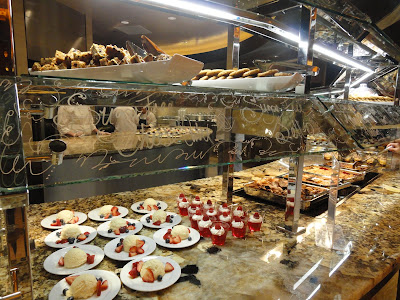 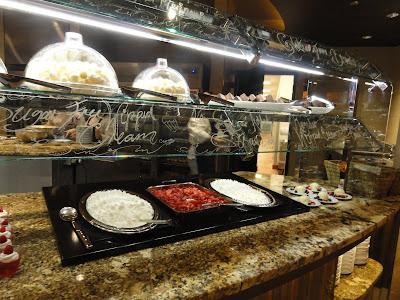 The dessert section was quite extensive, and included plenty of sugar free treats too. The chocolate bread pudding was compelling, and there were two large bowls of fresh whipped cream next to a bowl of strawberries in sauce. So, try to save a little room after dinner to partake of a couple desserts.

The new Seasons Buffet has potential, but it remains to be seen whether it lives up to it or not. I expect that after all the costly renovations, the Mohegan Sun will endeavor to make the restaurant succeed. Probably the primary issue they will face is keeping the food hot enough.  I will try to check it out again so see how it goes, and will of course report back when I do.  If any of my readers visit the buffet, I would love to hear your feedback as well.
Posted by Richard Auffrey at 4:00 AM