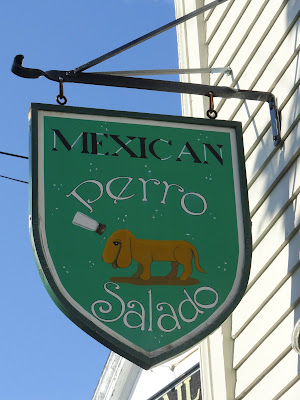 When you think of restaurants in Newport, Rhode Island, seafood probably first comes to mind but do you even give any thought to Mexican cuisine? Probably not, but if you dine at Perro Salado then it is very likely that your mindset will change.

Perro Salado is Spanish for "salty dog," an apt phrase to pay homage to this famous fishing and sailing port. The restaurant is about four years old, a joint venture between three people: Dan Hall, Andi Johnson, and Russ Hall. Russ, Dan’s brother, always had a dream of owning a restaurant. He fell in love with Mexican cuisine and saw an opportunity in Newport, which was largely bereft of such cuisine. Dan was a chef, who had worked in Miami and New York, and was up for the challenge of opening a restaurant. Andi Johnson, the general manager, has an artistic eye and helped develop the look and decor of the restaurant.  Andi also works as a bartender, helping to create the innovative cocktails on their drink list. 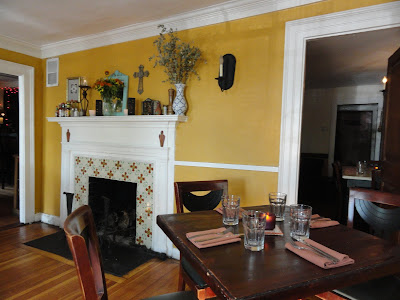 I was invited to dine at Perro Salado, and was intrigued enough by their menu and philosophy to accept the invitation.  The restaurant is located inside the 300-year-old colonial Decatur House, where naval captain Stephen Decatur was raised prior to the Revolutionary War. As it is a house, the dining areas are spread out through a seeming maze of different rooms, with a bar set in the entry room. Thus, each room is also relatively small, with maybe a half dozen tables or so in each. This provides a homey ambiance, and the decor contributes to this pleasant atmosphere. The Mexican flair is restrained and more subtle, not like other Mexican places which overwhelm with kitsch. Perro Salado is a casual place, appropriate for an intimate date, a group of friends after work or a family. 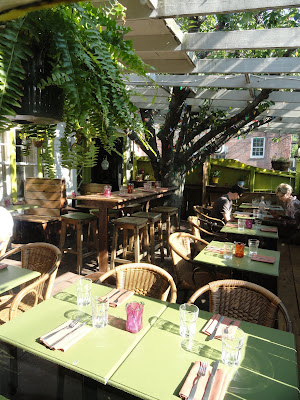 There is also a moderate-sized outside patio where you can dine and relax on a warm summer night.  When I arrived, it was a beautiful Saturday evening and there was a short line of people waiting for the restaurant to open at 5pm. By 6pm, the restaurant was nearly full, so it is obvious this this is a very popular dining destination. After my own experience, I can readily understand why it is so popular, and I would return there when I go back to Newport.

Before ordering your meal, you might want to start off with an alcoholic drink, and tequila reigns supreme here, from margaritas to tasting flights. There are five different types of margaritas, from the House Margarita to the Cilantro-Jalapeno, priced from $6.50-$8 per glass, or a pitcher from $30-$35. Prices are higher if you want a more expensive tequila.  I very much enjoyed the taste of the Blood Orange Margarita, and they did not skimp on the tequila. For flights, you can get a Vertical (consisting of a silver, reposado and anejo from the same producer) or a Horizontal (consisting of the same grade from three different producers).  You'll also find some other Mexican inspired cocktails, $6-$10, from Oaxacan Lemonade to the Pepino Fresco. I tried the Mezcal Mule, with Scorpion Silver Mezcal, ginger beer, and lime juice, though it did not impress me, needing more ginger flavor.

They offer Red and White Sangria ($11/glass, $22/pitcher) and tried a glass of their Red. I have high standards for sangria, having been spoiled by the excellent sangria at Dali. To my surprise, Perro's sangria reminded me exactly of that from Dali, and I was extremely pleased with its taste. This is sangria I could drink all night long. On the drink menu, you will also find beers, draft and in the bottle, and a small wine list, which has some interesting choices.  I should also note that upon arrival, your server places a chilled bottle of water on your table, a nice touch. 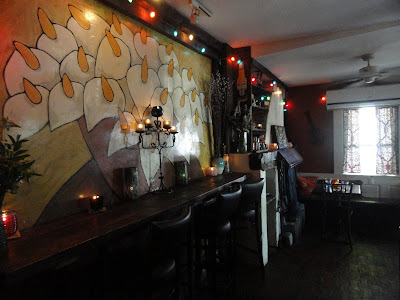 The food menu is relatively small but with sufficient diverse and interesting choices, including 5 Entradas (appetizers), 2 Ensaladas (salads), 5 Platos Principales (entrees), Taqueria (tacos to quesadillas), and 10 Sides. There were several off-menu specials as well. This is a restaurant that is not trying to overwhelm you with choices, and I like that idea. If you want seafood, beef, poultry, or even vegetarian, you will be able to find something to choose. Based on the dishes I had, I think you could even make a great meal, sharing just Entradas, Ensaladas and Sides.

Most of the cuisine is not traditional Mexican cuisine, but rather inspired by the flavors and ingredients of Mexico. The chef uses fresh ingredients, often local and/or organic, and most of the specials included local ingredients.  This is another compelling reason to patronize Perro Salado, though the true test is still the taste of the food.  And in that regard, Perro passes with flying colors. 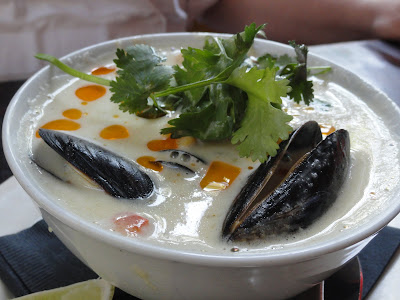 My dinner began with a couple Entradas, the first being the Seafood Chowder ($10), which includes shrimp, mussels & scallops in coconut milk & lime broth. The broth was thinner than some other chowders, had a strong seafood taste, lots of buttery notes, and some tropical flavors. There was plenty of seafood in the chowder, and it all seemed fresh and tender.  I enjoyed the taste, especially the unique addition of the coconut and lime. 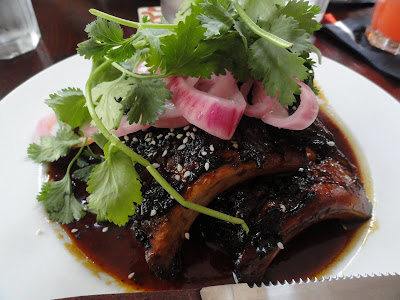 The Sticky Pork Ribs ($11) were a knockout! The ribs are supposed to be glazed in Coke, brown sugar and Mexican spices, and you receive two good-sized racks. The ribs had a delicious charred and crispy exterior that easily peeled away from the rest of the ribs. I would have been satisfied with just a plate of that tasty crispness. The rest of the ribs were very tender and meaty, falling off the bone. They had a strong sweetness to them, with underlying hints of spice, and were plainly addictive. If you visit Perro, you must order these ribs. 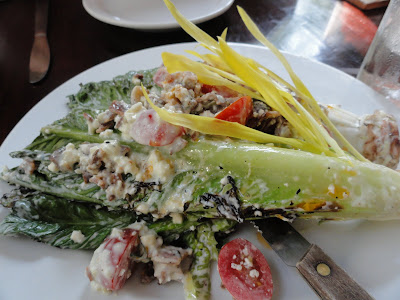 An intriguing Mexican variant on a famous classic is the Grilled Romaine Caesar Salad ($9) which has jalapeño, bacon, cotija cheese, and a house dressing.  The jalapeno added some appealing heat to the dish, and the cotija presented a creamy texture to the the dish. The produce seemed very fresh and I think I like this variant better than a conventional Caesar. 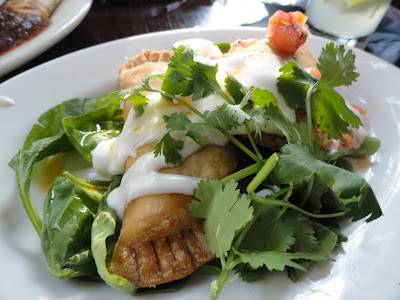 For an entree, I decided to combine an Entrada with a choice from the Tacqueria.  From the Entrada, I went with the Empanada del Dia ($9), which was beef. The flaky pastry was filled with plenty of well-spiced meat, and sure seemed as if it were homemade. 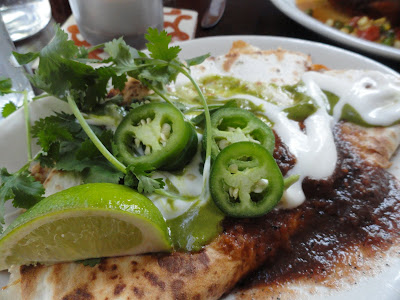 From the Tacqueria, I chose a Quesadilla ($8), filled with Chicken Tinga. The grilled tortilla was filled with plenty of moist, shredded chicken and melted cheese, and the sauce added a spicy edge to the dish. For the price, it was a good-sized dish and shows the kitchen can produce more traditional Mexican dishes as well as their innovative ones. 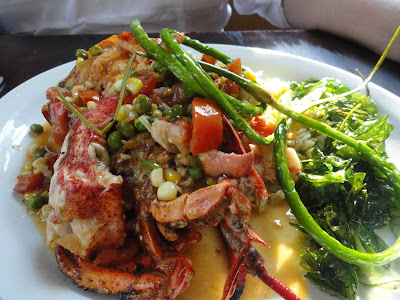 One of the special entress of the night was a Lobster dish, special, atop rice and accompanied by corn, garlic scapes and other veggies.  There was lots of sweet lobster meat and the rice was also quite tasty too. Everything seemed fresh, as had all of the other dishes, and once again is was an intriguing variation on something more traditional. 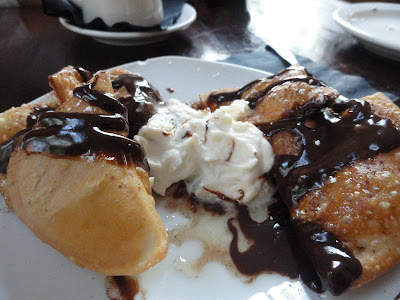 I saved a little room for dessert and chose the Sopapillas, which are drizzled with Mexican chocolate and accompanied with whipped cream. Light and flaky, the warm sopapillos made for an excellent platform for the rich chocolate and whipped cream. And they were light enough that almost everyone should have enough room after dinner to have a couple sopapillos. You won't be disappointed.

Service was very good, attentive without being overbearing. Overall, I was impressed with the cuisine, especially the sticky ribs and caesar salad, plus their philosophy of using many local and organic ingredients is a worthy one. I enjoyed its casual and homey ambiance, and their red sangria gets my hearty approval. It is clear why the restaurant attracts the crowds that it does and I would definitely return here on my next visit to Newport. I strongly recommend that my readers make a visit there too, and have some sangria and ribs.