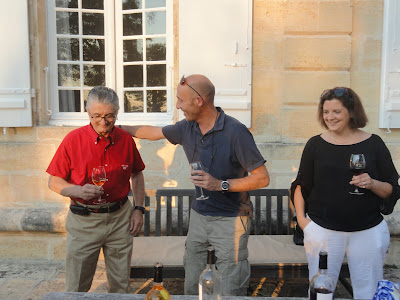 Last evening in Bordeaux, I enjoyed some doggy-style at dinner and think many of my readers would have enjoyed it as well.

As part of a press trip sponsored by Planète Bordeaux, I came to Bordeaux yesterday and will be here until Friday.  Last night, we dined at Château Sainte Barbe and also met Laetitia Mauriac of Chateau la Levrette (pictured above on the far right). We tasted a few of their wines, including their White, Red and Clairet.

The White, made of 100% Sauvignon Blanc, was intriguing, especially as it had been fermented in a barrel. It was unlike most other Sauvignon Blancs, which I very much enjoyed. The Red, a blend of Merlot and Cabernet Sauvignon, had delicious fruit flavors with a spicy backbone, while the Clairet, using the same two grapes was much more spice dominant. None of these are expensive wines, and seem to offer a good value for Bordeaux wines. 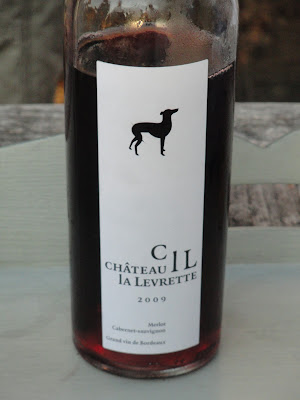 Check out their wine label, which is simple with a silhouette of a greyhound. The name of their chateau, "levrette" is a French word which means "greyhound" and they wanted these wines to emulate the qualities of the greyhound, its nobility, loyalty and grace. In the U.S., this would be a compelling story and a number of people would buy the wine merely for the picture of a dog on the label. This certainly would not be a controversial wine.

But, in France, it is another matter as "levrette" has an additional, and more provocative meaning. It also refers to the sexual position of "doggy-style," something which would be evident to most French speakers, but which would go over the heads of English speakers. So, you could ask someone to enjoy some doggy-style with you, and only be referring to some wine.

But should such names be permitted on wine labels?  We know the U.S. TTB closely regulates what can appear on a wine label so would they permit a label that merely stated "doggy-style" in English? I think that would be difficult to get past them. Though you will find other suggestive labels that have been allowed from Menage a Trois to Foreplay. So maybe this label could slide by the TTB. I am sure some of the more prudish wine drinkers may frown upon such labels, but I think "levrette" was a clever double entendre. Sure, it was intended to be provocative but the wine inside the bottle was good, so this was not merely some marketing stunt, intended to sell inferior juice.

What are your thoughts on their label?
Posted by Richard Auffrey at 1:00 AM

Very simple clean labels have always been my favorite - the double entendre is a nice bonus.