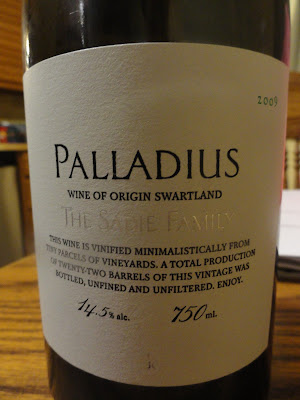 During the last couple years, Swartland, a wine region in South Africa, has rose in prominence, receiving much attention in the wine press. Some amazing wines are being produced in this region, yet the average wine drinker probably has never tasted a wine from this area, and knows very little about what is happening in this region. This is a region that you should learn about, and find a way to experience their wines.

Just before Christmas, my friend Adam, of Wine-Zag, gave me a bottle of 2009 Sadie Family Palladius, a Swartland wine. In early 2010, after a visit to South Africa, Adam reviewed the 2008 Sadie Family Palladius, stating "...the wine is a knockout and very, very special." More recently, after another trip to South Africa, Adam wrote a fascinating article about the Swartland region.

With a dinner of seared scallops, I chose to open the Palladius, initially believing that it was my first time drinking this wine. I later learned that back in 2007, I tasted the 2004 Palladius, and had been very impressed with the wine. Well, the 2009 Palladius was equally as impressive and receives my strongest recommendation.

The Sadie Family winery is only about 10 years old, but it has already received much acclaim. In 2010, Platter's South African Wine Guide, the wine "bible" of South Africa pronounced Sadie Family Wines their Winery Of The Year and the 2008 Palladius as their White Blend Of The Year. Sadie produces a red blend, called Columella, which is named after an ancient Roman who wrote one of the most famous books on viticulture, De re Rustica. So, when choosing a name for their white blend, they went with Palladius, the name of another Roman who wrote Opus agriculturae, a treatise on farming which apparently used Columella's book as a model. The first vintage of Palladius was 2002.

The 2009 Sadie Family Palladius (around $60) seems to be a blend of eight white grapes, though the exact blend appears unclear and I have seen some contradictory information. Sources seem to agree the blend includes Chenin Blanc, Roussanne, Grenache Blanc, Viognier, Clairette Blanc and Palomino. As for the other two grapes, they might be Chardonnay, Semillon, Marsanne, or Verdelho. Some of these grapes are old vines too, like 88 year old Semillon and 35 year old Palomino. Now that is quite a blend of grapes, similar in some ways to a Rhone-style blend. 2009 was considered an excellent vintage, and this wine was aged for two years in barrel. The concept behind this wine was that it should age well in the bottle, pair well with food, and reflect terroir.

This is a sublime wine, which dazzles with its complexity, flavors and structure. From an alluring nose to a compelling taste, this wine is sure to impress almost any wine lover. Savor plenty of acidity, a very long and satisfying finish and its round, full mouth feel. It possesses an intriguing melange of flavors including citrus, peach, honey, spices, herbs, and minerality. In fact, the more time you savor and reflect on the wine, the more subtle flavors which seem to surface in your mouth. The Palladius paired very well with the scallops, and seems like it would be an excellent seafood wine, though I suspect it would match well with a variety of foods, from chicken to maybe even some meats like pork. This wine receives my highest recommendation.
Posted by Richard Auffrey at 4:00 AM

Rich, glad you found the wine intriguing. Not having tasted the 09 yet, I can just think back to past vintages that showed so many interesting levels of flavor and aroma.