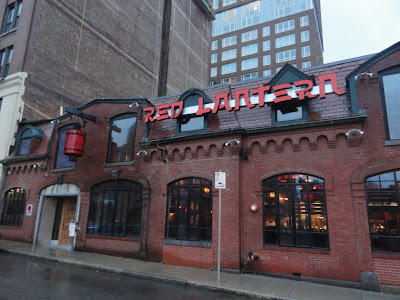 A Japanese red lantern, hanging outside, immediately captured my eye as I walked down Stanhope Street. In Japan, these red lanterns are known as akachōchin, and during the 18th century, they indicated the presence of an izakaya, a sake bar where you could also nibble on some food. Over time, izakayas began to refer to any Japanese bar that served food to accompany alcohol. The lantern that I saw was located outside of the Red Lantern, an Asian restaurant and bar which opened this past June.

Red Lantern is owned by the Big Night Entertainment Group, which is also behind The Estate, a nightclub in Boston, as well as Scorpion Bar, High Rollers, and Shrine at Foxwoods Casino. Contrary to the concept at these other establishments, Red Lantern is primarily about the food, a restaurant with an added bar, rather than a bar that also happens to serve some food. That might be their biggest challenge, convincing people that this is a dining rather than a drinking destination, though you will likely enjoy their beverages as well. 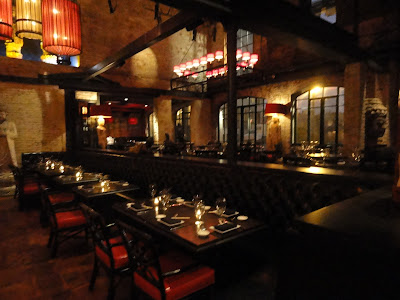 It is a large restaurant, able to sit about 250 people, and the décor includes much appealing red and dark wood colors. The main dining section has smaller tables for couples, larger, circular tables for groups, as well as booths with leather clad seats. You can also sit in front of the sushi bar or even at the counter facing the open kitchen with its wood-fired grill and wok stations. There is a separate room with a 40 foot marble topped bar and a couple televisions. In addition, there is the Apothecary room, a private dining area that can hold 40 people.

Everywhere you turn, scattered all over the room, including inset high up on the walls, you will notice many Buddha and Asian statutes, some complete while others are just heads. The ceiling is filled with red lanterns. The ambiance is hip but with traditional elements that combine in a pleasing décor. It would be a great place for couples or groups, and on a Wednesday evening, the restaurant was packed with a diverse crowd.

Red Lantern is open for dinner seven days a week, and serves food in the dining room until 1am. They also serve takeout cuisine so if you live nearby, you can stop and pick up your dinner. The Executive Chef is Kevin Long, who started working in 1995 at Tosca in Hingham. Chef Long now is in charge of all the kitchens of Big Night Entertainment Group though his primary focus is currently Red Lantern. 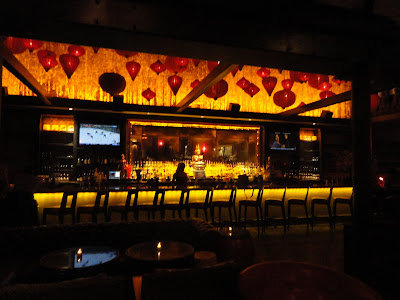 They have a fully stocked bar, with a wide range of choices, and their selections are being revised and expanded. Beverage Director Joe O’Connor stated they want the cocktail list to be big and fun, and they have created numerous Asian influenced drinks. You’ll find Martinis ($12) like the Drunken Samurai, made with Moonstone Asian Pear Sake, Amaretto, and fresh lemon. This has an interesting blend of pear and nutty flavors and was not too sweet.  You’ll also find Cocktails ($10) like the Wasabi Mary, made with vodka and Red Lantern’s Wasabi Bloody Mix, which could have been spicier but does sneak up on you over time. Other special drinks include the huge Scorpion Bowl for 4 ($44), served in a trifle bowl, and The Flaming Plum shot ($9).

You will find 16 available wines by the glass as well as over 60 wines by the bottle, starting at $34. Their wine list is predominantly California but with French Champagnes and some wines from other regions such as Argentina and South Africa. They sell more white wines by the glass and more reds by the bottle. To my pleasure, they sell 9 Sakes by glass ($8-$12), such as the Kaori Junmai Ginjo, and 14 by the bottle, thought the prices seem a bit high, especially for the less expensive bottles. They also stock numerous beers, both draft and bottle. 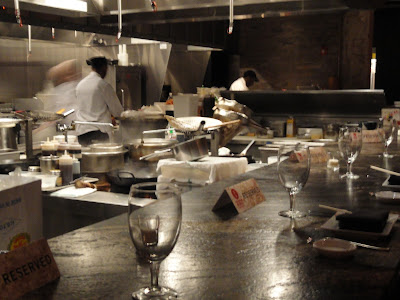 The higher priced items include more luxury items like lobster and Wagyu beef. Some of their specials include a Pu Pu Platter ($30/$60) and a Whole Roasted Hong Kong Duck ($88, serves up to four). There is also a menu of Sushi, Sashimi, and Maki rolls. This is reasonably priced, such as two pieces of Tuna for $7 or Salmon for $6.  In addition, you will find a Special Monday menu, which includes seven special small bites for $7 each, from fried shrimp shu mai to pineapple fried rice. There is also a featured wine/sake each week.

Five of us dined together, a fun group of food lovers so that the conversation never dulled. Our main server was Kai Le, a personable and energetic person, who explained the various dishes and made sure to bring us whatever we needed, from drinks to plates. 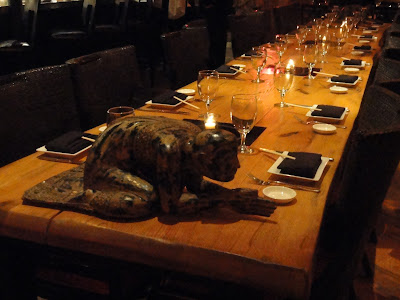 We began with a few dishes to whet our appetite. The Duck Buns include two warm and soft, steamed buns filled with plenty of tender and savory Hoisin duck. They were accompanied by some mirin pickles, an addictive side which were crisp and had a spicy kick to them. The creamy Avocado Salad, with cucumber, tobiko, crabstick, yuzu, greatly appealed to a couple of the diners while the other two were particularly drawn to the Hot & Sour Soup. This soup has 5-spice tofu, pork broth, mushrooms and white Pepper. This soup was much darker in color than others I have tasted, and also had a deeper, meaty taste with lots of umami.

Up next, we tried some sushi and sashimi, including Toro and Dressed Hamachi. A nice presentation and the Toro was silky smooth, fresh and flavorful, with plenty of veins of fat. The Hamachi was also tasty, with only mild heat and almost citrus flavors too. We later tried a few maki rolls too, and the Crunchy Roll, with Bana salmon toro, tobikko, crab stick, and crunchy was the clear favorite, though the Spicy Tuna performed very well too.

I was enamored with the Singapore Street Noodles, a bowl of thin noodles with pieces of shrimp, scallop, and pork with a Madras Curry and XO sauce. Great textures, lots of flavors, and a light dish. A heavy dish, but worthy, was the Mongolian Steak, slices of skirt steak with garlic, ginger, and mushrooms. Tender beef with rich flavors will please any carnivore. It was accompanied by a bowl of sweet potatoes with a crispy exterior and a soft, sweet interior. The Tik Tok Chicken were chunks of water chestnut golden chicken, atop white rice and topped by crisp wonton chips. It has a blend of sweet and spicy flavors, with tastes of orange. 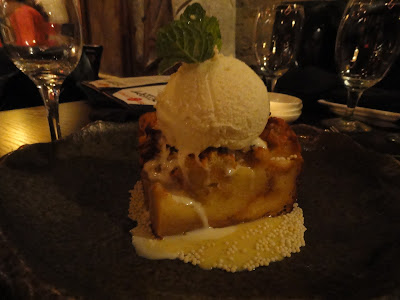 I would even come to Red Lantern just for dessert. The Pineapple Bread Pudding, with coconut ice cream, was superb, a perfect blend of tropical flavors. The bread pudding had a nice firm, but soft, texture and it was bursting with fresh pineapple flavors. A fantastic dessert that made me forget how full I was and want to devour it in its entirety.  The Tempura Bananas are liked banana-filled spring rolls and there is enough to share with someone else.

Overall, I was impressed with Red Lantern. It is reasonably priced for the quality and quantity of their dishes, and there is something for everyone, no matter their preference. The food is obviously very important to them and does not come in second place to their drinks. Yet they have not skimped on their drinks either. Take a group of friends to Red Lantern and have a fun and delicious evening.

(A modified version of this review appeared in Boston Scene magazine, with plenty of great photos.)

Thrilled to read your thoughts! I went to Red Lantern a few months ago, and was underwhelmed with their sushi, but wondered if I had maybe just not ordered correctly. I'll have to return...

I still haven;t been to Red Lantern, but have read plenty of great reviews. I definitely want to try that pineapple bread pudding!

That was pretty awesome, thanks for the blog post, looking forward to more from you.

Thanks for all your comments. That bread pudding rocks!