The Science of Sake & Food Pairings 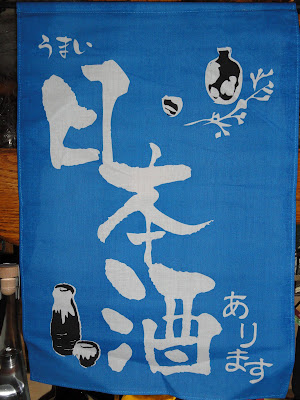 “Umami is the flavor god before which we sake types bow down and worship.”
--Philip Harper, the first non-Japanese toji, (Sake Master Brewer)

Many people still consider Sake as something to pair only with sushi, tempura and other Japanese cuisine. Few non-Japanese restaurants carry Sake, which further perpetuates the mistaken belief that Sake is only for Japanese food. In actuality, Sake makes a fine accompaniment to many different cuisines and sometimes is even a better pairing than wine. You can enjoy Sake with dishes such as mushroom risotto, pork tenderloin, roast chicken, barbecued ribs or even pizza.

It is important to understand that Sake does not possess a single flavor profile but rather has an incredibly diverse range, from sweet to dry, fruity to floral, bold to elegant, earthy to herbal, and much more. There are many different types of Sake, such as Junmai, Nigori, Koshu, Honjozo, Ginjo and more. Sake has at least as much complexity as wine, and more in some respects, possessing twice as many aromatic esters as wine. That means Sake has the potential for twice as many aromas than wine, and aroma plays a significant role in flavor.

With all the different flavor profiles and types of Sake, there really is a Sake that is appropriate for nearly any type of food. The Japanese have an apt saying, Nihonshu wa ryori wo erabanai, which basically translates as "Sake does not get into fights with food." It is an indication that they feel Sake pairs well with many different foods, and generally won't overpower anything or be overpowered by some dish.

There are some standard foods that are considered a traditional pairing for sake and they are collectively referred to as sakana. This usually includes edamame, raw fish, grilled meats, dried squid, tofu and vegetables (often pickled). But Sake is not restricted to these traditional items and it is time people started realizing the potential. 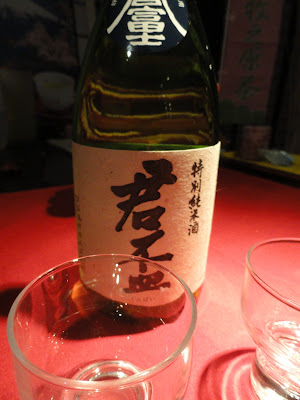 When it comes to wine and food pairing, there are really no set rules. But, even though there are no absolute rules, there are scientific and logical reasons why some wines and foods pair better together than others. Elements like acidity, tannins and aromatic compounds all play a significant role in food pairing. The same is applicable to Sake, and you can basically pair it as you would pair wine with food. You can compare or contrast the elements of the Sake to the food, just as you would with wine.

Junmai Sake, which often has a rich, heavy body, is sometimes considered the “red wine” of Sake and thus can pair with stronger flavors including beef, fried foods and rich sauces. Ginjo and Daiginjo Sakes are often lighter and more subtle, comparable to many quality white wines. They should be paired with lighter, milder foods, such as seafood and chicken. As Sake acidity varies, you should pair higher acidic Sake with oilier foods while lower acidic Sake pairs better with rich or salty foods.

Like Riesling, Sake can range from sweet to bone-dry, and a sweet Sake can pair very well with spicy dishes, such as Thai or Indian curry. A fine Burgundy may have an earthy or mushroom component, and the Kimoto or Yamahai Sakes can have a similar profile, so they will pair well with foods appropriate for such wines. Try an earthy Kimoto with duck or lamb. Rather than pair Champagne with caviar, you could try a Sparkling Sake instead. Note that most sparkling Sake tends to be on the sweeter side, though there are dry varieties as well. For a dessert pairing, try a sweet Nigori, a cloudy Sake, or even a rich Koshu, an aged Sake. 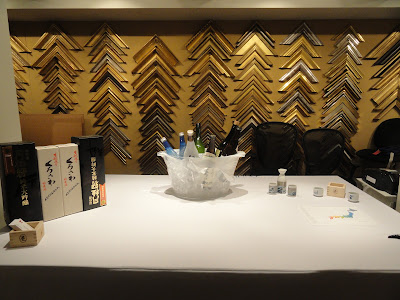 Beyond this simple advice, a little science lesson will help you make better pairings, an examination of some of the special components of Sake, namely amino acids. Amino acids, at their simplest, are the basic building blocks of proteins and each amino acid has its own specific function. These amino acids play a significant role in the utility and versatility of Sake.

There are over twenty different amino acids in Sake, a greater variety than found in any other alcohol. As an example, Sake contains seven times more amino acids than red wine. During fermentation, more than half the protein in the rice gets broken down and converted into nitrogen compounds, nearly half which are amino acids. The protein in rice is generally located in the outer layers, which often get polished away, at least in part. That means that a higher quality Sake, like a Daiginjo, with a higher rice polishing rate, will have less protein available for conversion and subsequently a lower level of amino acids.

The degree of amino acids in a Sake is known as the amino sando, and you may even see that number listed on a Sake label or in the sales materials. Amino sando levels tend to average between about 0.7 and 1.5. Each specific style of Sake has an average amino acid level, though obviously there will be variation. For example, Futsu-shu, Ginjo and Honjozo have an average level of 1.3 while a Junmai has a 1.5.

Five kinds of amino acids are considered to most affect taste: alanine, arginine, aspartic acid, glutamic acid and succinic acid. Alanine is said to produce sweetness, while arginine produces bitterness and aspartic acid can produce acidity and astringency. Glutamic acid and succinic acid may be the most important components though because of their role in creating the taste of umami. 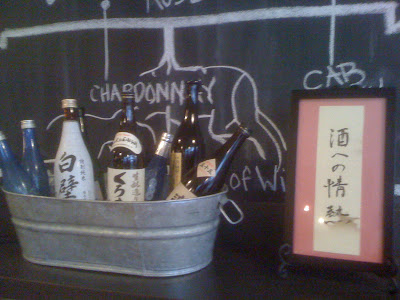 You probably already know the four basic tastes, including salt, sweet, bitter, and sour, but there is a fifth as well. Umami, this fifth taste, is often described as “savoriness” or “meatiness” though it is probably best understood through tasting foods rich in umami, such as soy sauce, ripe tomatoes, parmesan cheese, scallops, and mushrooms.

In 1908, Professor Kikunae Ikeda, a Japanese chemist, discovered that glutamic acid gave kombu seaweed a very distinctive taste, which he labeled umami. Kombu may possess more umami than any other food. Later scientists would identify two other sources of umami, inosinate and guanylate, two nucleotides. Inosinate is found mostly in meat and fish while guanylate is most often found in mushrooms. Currently, at least 39 substances, including succinic acid, have been discovered to contribute to the taste of umami.

It still took time for umami to gain credibility as it was not until 1985 that umami was officially accepted by the scientific community as the fifth taste. In 2000 and 2002, a couple scientific studies then determined that humans possess taste buds specially dedicated to glumatic acid, to the taste of umami.

Our first exposure to the taste of umami is actually before we are even born as amniotic fluid in the womb possesses glutamic acid, about 2.2mg/100ml. After we are born and if we are breast fed, then our exposure to umami continues, and to a greater degree as breast milk is much higher in glumatic acid, about 18.7 mg/100ml.

Umami does more than just make food taste better. It can also serve to suppress our appetite, causing us to eat fewer calories by convincing our stomach that it has had enough protein. In addition, because it tends to round out and deepen flavors, then it can also deter us from adding extra salt and fat to our foods. 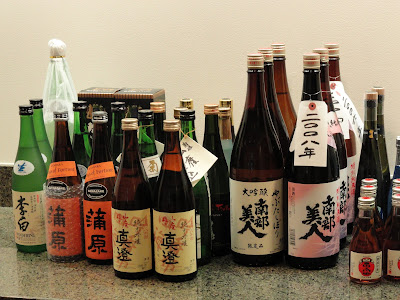 For a long time, food and wine pairing advice ignored the involvement of umami. But recently, that has begun to change and Tim Hanni, a Master of Wine, has been leading a crusade to correct that omission. In fact, the Wine & Spirits Education Trust has recently revised their primary textbook to include a discussion of umami, wine and food pairings. Though wine possesses some glutamic acid, it contains much less than Sake.

On average, Sake contains 100-250 mg/l of glumatic acid while wine contains only 10-90 mg/l and beer even less, only 10-15 mg/l. Generally, older, earthier wines tend to possess more glutamic acid. Sherry, Port, and Madeira tend to possess some of highest levels of glutamic acid of any types of wine. But, if considering umami in your food pairing recommendations, maybe you should consider Sake instead because of its greater amount of glutamic acid..

Now, as Sake possesses a high level of glumatic acid, it possesses plenty of umami taste. So what is the impact of that umami in regards to food pairings? First, you can pair glutamic rich Sake with other glumatic rich foods, which is similar to what is sometimes done in Italian cuisine. Ripe tomatoes, used in red sauce, are rich in glutamic acid, 246 mg/100g, while Parmigiano Reggiano cheese, grated atop red sauce, contains a whopping 1680 mg/100g. That is considered an excellent pairing so why not consider adding some Sake to that equation?

Second, there is also a synergistic effect with umami, which means that when you combine foods with different sources of umami, the overall taste is intensified. So, when considering foods to pair with umami-rich Sakes, which are high in glutamic acid, then you can seek out foods with high levels of inosinate or guanylate to create that intensification effect.

Tuna, chicken and pork have relatively high amounts of inosinate (respectively 286 mg/100g, 283 mg/100g, and 260 mg/100g) though shrimp and beef have a fair amount as well (respectively 92 mg/100g and 90 mg/100g). So an umami-rich Sake would enhance the savory taste of these foods, from barbecued chicken to a filet mignon.

Mushrooms are the key possessors of guanylate, though some types have much more than others. For example, Shiitake mushrooms have a high amount of guanylate, 150 mg/100g. Thus, something like a mushroom risotto would pair very well with Sake. It is also interesting to note that truffles are one of the few foods containing all three sources of umami in a significant amount. Talk about an umami explosion!

Cheese often is rich in umami and pairs well with different Sakes. Pairing cheese with wine can sometimes be a challenge as cheese can be high in fat, salty and possess strong flavors. With red wine, the saltiness can sometimes cause issues because of the tannins. The strong flavors can also sometimes overpower wine. Sake though has no issues with saltiness, as it does not possess tannins, and can stand up to those strong flavors, even blue cheese. Sake’s ability to stand up to strong flavors also makes it an excellent pairing for bitter vegetables, like asparagus, thought to be a difficult food to pair with wine. Just think how Sake is able to cope with strong wasabi flavors in sushi. 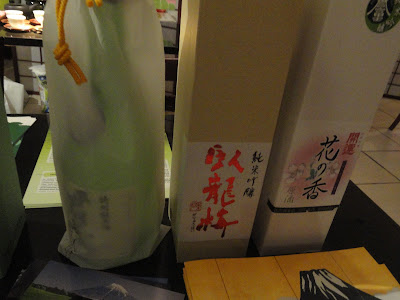 Besides glumatic acid, other amino acids in Sake provide additional benefits. They help to neutralize fishy flavors in seafood, something wine generally cannot do. Thus, Sake may be a better pairing with seafood than wine, especially any seafood that might tend to possess a more fishy flavor, like uni. In addition, some red wines contain minute amounts of iron that cause seafood to leave a fishy taste in your mouth. That does not happen with Sake.

So expand your horizons and experiment with Sake with food pairings. Try some Italian, barbecue, burgers, pizza, Spanish tapas, or seafood with a delicious Sake. Enhance the umami of your dish, and revel in the savoriness that envelops your mouth. And if you find you love a certain Sake pairing, please come back and share your discovery with me.

What are some of your favorite, non-traditional food pairings with Sake?
Posted by Richard Auffrey at 3:00 AM