Jefferson's Bourbon: The Art of Blending 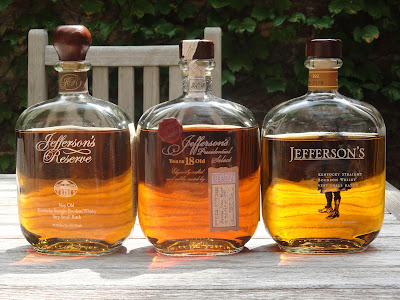 After visiting two bourbon distilleries, I met with the founder of another bourbon company, but one which does not distill any of its own bourbon. Instead, they engage in the art of blending, producing intriguing small batch bourbons.

While having lunch at Proof on Main with my good friend Fred Minnick, we were joined by Trey Zoeller, the founder of Jefferson's Bourbon, and his father, Chet Zoeller, the author of Bourbon in Kentucky: A History Of Distilleries in Kentucky. It was an informal meeting but the subject of bourbon dominated our discussion. Both Trey and Chet were very personable, and it was a very pleasant and informative lunch. I still though would have liked to spend even more time with them, discussing bourbon and their company.

Trey's family roots in alcohol production extend back at least eight generations, to his great, great, etc. grandmother, Martha McLain, who was a moonshiner. Unfortunately for her, she ran afoul of the law. Around 1799, Martha was arrested for selling liquor without a proper license, which she was doing only to support her six children. 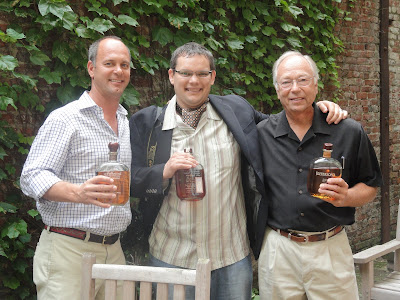 (Trey on the left, Fred Minnick in the middle, and Chet on the right)

Trey began blending bourbon back in 1997 and launched his own line in April 1998. He purchases all of his bourbon from other distilleries, often small unique lots which larger distilleries don't find profitable enough to disseminate. He generally blends about 3-4 different bourbon recipes, from 8-12 barrels, to create the three different Jefferson's Bourbons. These are all small batch bourbons, and the blending is truly an art, trying to create an interesting and complex product that all possesses excellent taste. Trey feels this is a "different style" of bourbon which may not be for everyone, but one which makes him proud.

Obtaining sufficient supply is always a challenge, especially as he seeks out quality. And one of their biggest challenges is competing with the larger bourbon producers, though Trey is very happy that their company has been growing by about 30% each year. They produce about 25,000 six-bottle cases annually. Their bourbon originally caught on with local bartenders, and they spread the word to others about it. Currently, Jefferson's Bourbon sells well in the Boston area so my local readers should be able to find it at the better liquor stores. 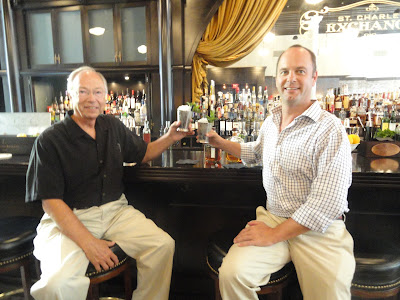 I was fascinated by Trey's tale of an experiment they recently conducted in ocean-aged bourbon! Trey celebrated his 40th birthday on a friend's ship in Costa Rica. The friend also has a small dishing boat and Trey got the idea to store five barrels of bourbon on his friend's boat while it traveled the sea. The barrels were strapped to the boat and spent 3.5 years at sea, baking in the heat as well as moving around frequently. Allegedly, the ship lost two barrels when their steel bands popped, though there is always the possibility that the men aboard the boat decided to taste test the bourbon themselves.

When Trey examined the bourbon, it found that it had caramelized and had an extremely dark color, looking almost black in a photo. Trey stated that it had a briny taste and was very complex for its age. He is planning to release some of it commercially so it will be quite intriguing to get a chance to taste the final product. Based on this experiment, Trey is next going to transport some bourbon barrels down the Ohio River, as old distilleries once did. 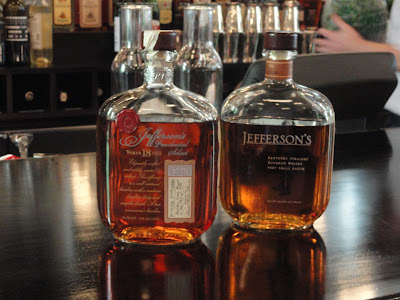 When you look at a bottle of Jefferson's Bourbon, what do you see? Look just at the bottle, its shape and form, not the liquid inside. Does it appear familiar? Trey's intent was to create a bottle that would resemble a  perfume bottle so that it would appeal to women! A very interesting marketing device.

Jefferson's Bourbon has three main products: Jefferson's, Jefferson's Reserve and Jefferson's Presidential Select. All three are probably best when drank neat or on the rocks, though of course you could use them in a cocktail if you so desired. They also produce a Straight Rye Whiskey which works very well in cocktails.

I greatly enjoyed the Jefferson’s Reserve, which I found to be smooth, elegant, subtle, and complex with a compelling melange of flavors. Each sip will bring to mind a new flavor, from caramel to honey, from butterscotch to figs, and much more. This is definitely a bourbon to savor on its own, rather than lose any of its complexity in a cocktail. Trey has created a superb bourbon which you need to seek out.

It was a pleasure to chat with Trey and Chet, and I wish them much luck with Jefferson's Bourbon. They are blending an exciting product, worthy of your attention, and I look forward to what they will develop in the future.
Posted by Richard Auffrey at 4:00 AM

I love their products and hope they keep at it for a long time to come. Thanks for sharing some background on the company!