I've long felt that T.W. Food, owned by Tim and Bronwyn Wiechmann, is one of the most underappreciated restaurants in the Boston area. When many people discuss the best restaurants in the area, T.W. Food doesn't often seem to garner a mention, despite being more than worthy for the accolade. Their new restaurant, Bronwyn, though seems to be getting much more attention and press. And once again, I believe they have created a winning restaurant.

Bronwyn, located in the Union Square region of Somerville, features the cuisine and drinks of Germany and greater Central and Eastern Europe. The restaurant has a patio, their biergarten, an inside bar area, and a dining room. Last week, Adam (of Wine Zag) and I stopped there for dinner after a Cognac tasting. It was our first time dining there, but certainly won't be the last. We sat at the bar, sampling several dishes and tasting some of the cocktails and wine offerings. We were both impressed and look forward to checking out the rest of the menu.

They have a full liquor license so you can order one of their special cocktails, priced $9-$12, or a Haus Cocktail, which are numbered 1-9, and priced $10-$12. I began the meal with an Eins Haus Cocktail, which contains Old Overholt Rye, Nux Alpina Walnut, Dolin Rouge Vermouth, Boston Bittahs, and St. Elizabeth Allspice. A spicy and complex cocktail, it was a strong way to start the evening.

The Drinks Menu also contains over 40 beers, from Austria, Czech Republic, Germany, Italy, Poland, Switzerland, and the US, with plenty to intrigue and please the beer lover. There are around 11 wines available by the glass ($8-$12) and about 34 by the bottle. The bottled wines, with a good portion under $50, generally come from Germany, Austria, Italy, and Slovenia. You'll find Zweigelt and Blaufrankisch, Riesling and Gruner Veltliner, and plenty of other interesting wines.

The Food Menu begins with a Prix Fixe option, 4 Courses for $45 per person ($29 for Beer & Wine pairing). There are then about 10 Starters ($5-$12), 9 Mains ($17-$32), 4 Sides ($5 each), and Haus-Made Wurst (Mini plate for $14 with 2 sausages, potatoes, sauer krat or the Giant plate for $27 with 6 sausages). There are some specials, including their own take on the Burger and Hot Dog. Despite all the emphasis on meat, there are even vegetarian and vegan options. In addition, they serve Brunch on the weekends.

After enjoying a cocktail, we had a glass of the 2013 Schloss Gobelsburg, “Cistercian,” Rosé ($11), made primarily from Zweigelt though a bit of St.Laurent may have been added. It was crisp, clean and dry with subtle red fruit flavors, reminding me of Provence-style Rosé.  Delicious and easy drinking, this is an excellent food wine too. 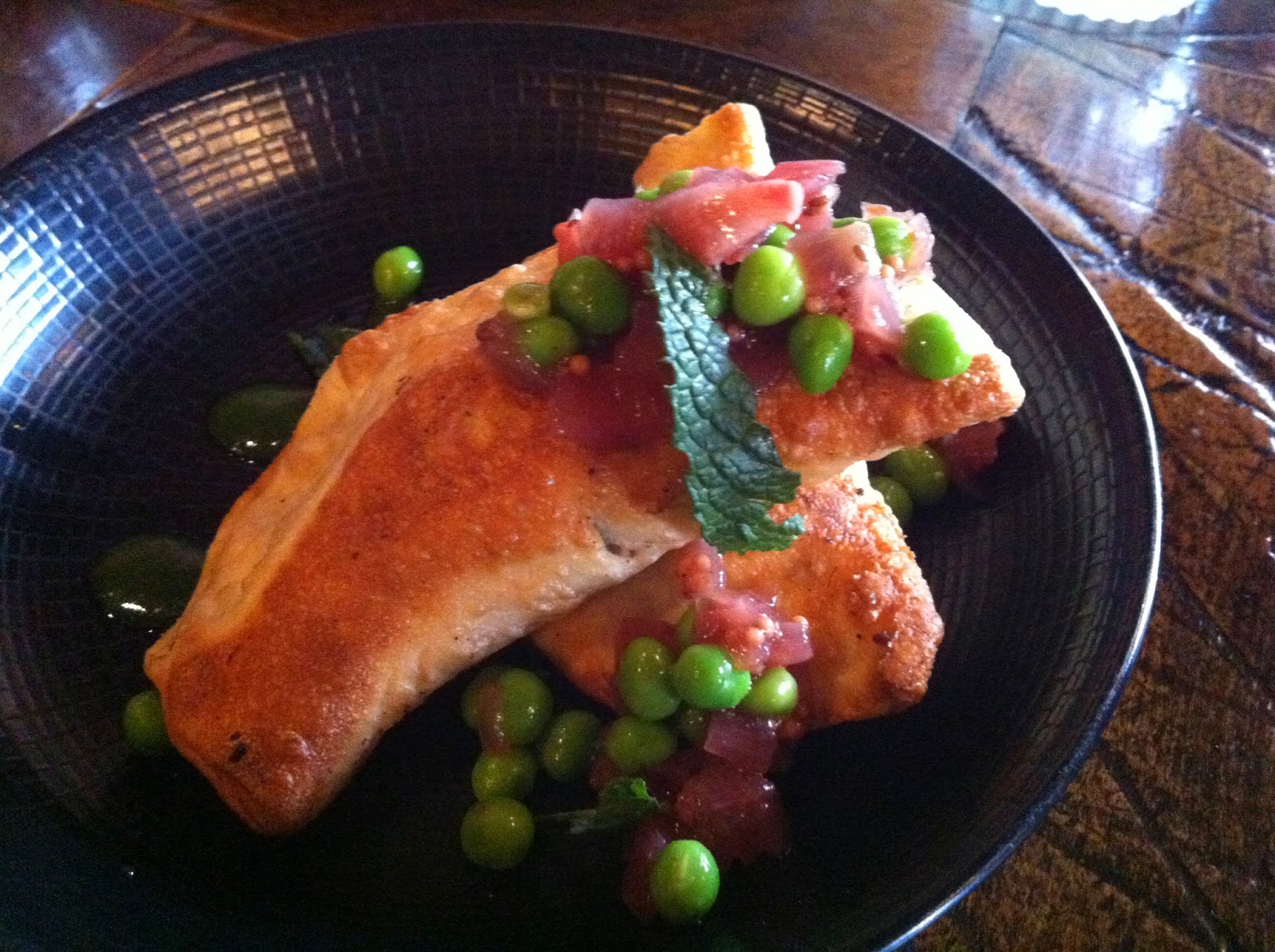 As for Starters, we began with the Pierogi ($11), two large house-made Pierogi, filled with ham and cheddar cheese, and topped by a sweet pea relish and mint. With a crispy, fried exterior, the interior fillings were creamy and flavorful. This dish is certainly different from other pierogi dishes I have eaten, but there's nothing wrong with that. 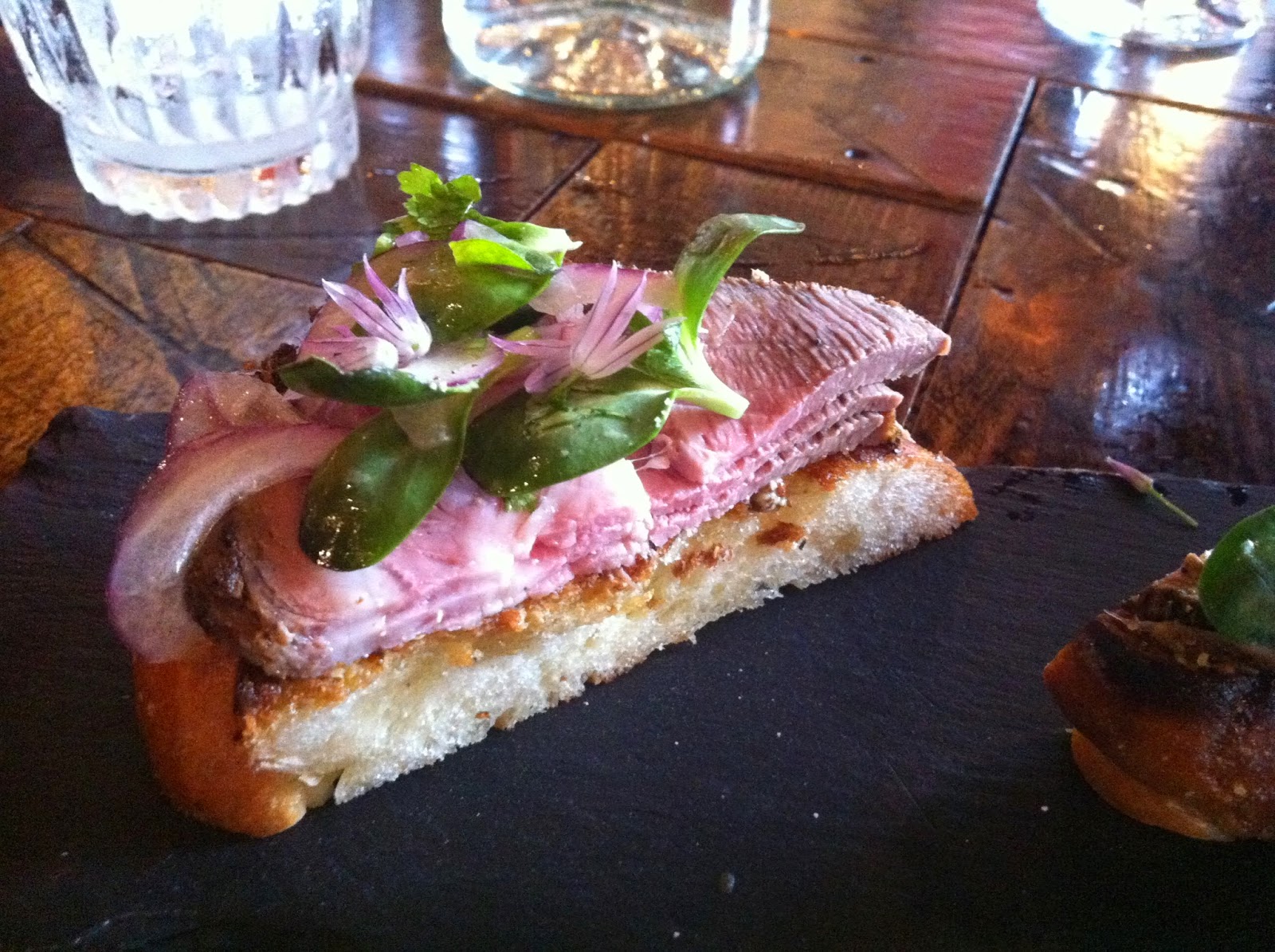 Another Starter, which is not on their online menu, was Coppa atop toasted bread with red onions. Another tasty dish, the coppa was tender, with just enough saltiness and spice, and was like an open faced sandwich. This would have made an excellentt lunch sandwich.

We also had a Mini Wurst Plate ($14) with a couple sausages, accompanied by a side, the Gurken Salat ($5). I actually don't recall which sausages we got, but I remember they both were delicious, though different. One was a more traditional sausage, while the other was round, almost like a mini-sausage patty. The potatoes with the sausages had a crunchy exterior, but were soft and fluffy inside. The Gurken Salat were essentially thinly sliced pickles, and were addictive. 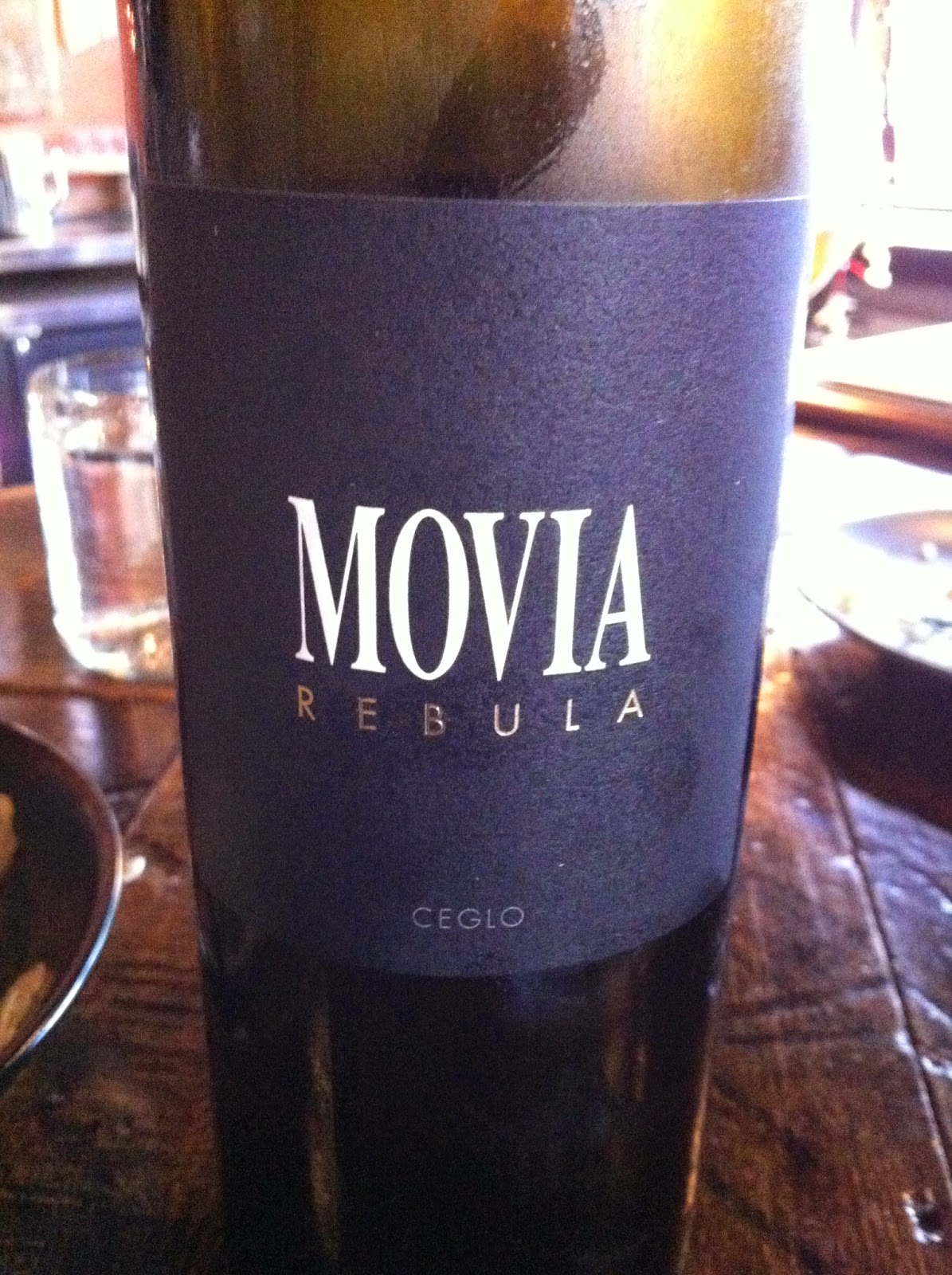 We moved on to a bottle of the the 2010 Movia Rebula ($63), produced from 100% Ribolla from vines that have an average age of 66 years. This is an intriguing "orange" wine, with a complex blend of minerality, spice, apricot, apple and more. It is crisp with a lengthy and pleasing finish. I have enjoyed a number of other Movia wines, but this Rebula was new to me. It is an impressive wine, and paired well with the food to come, especially the white anchovies! 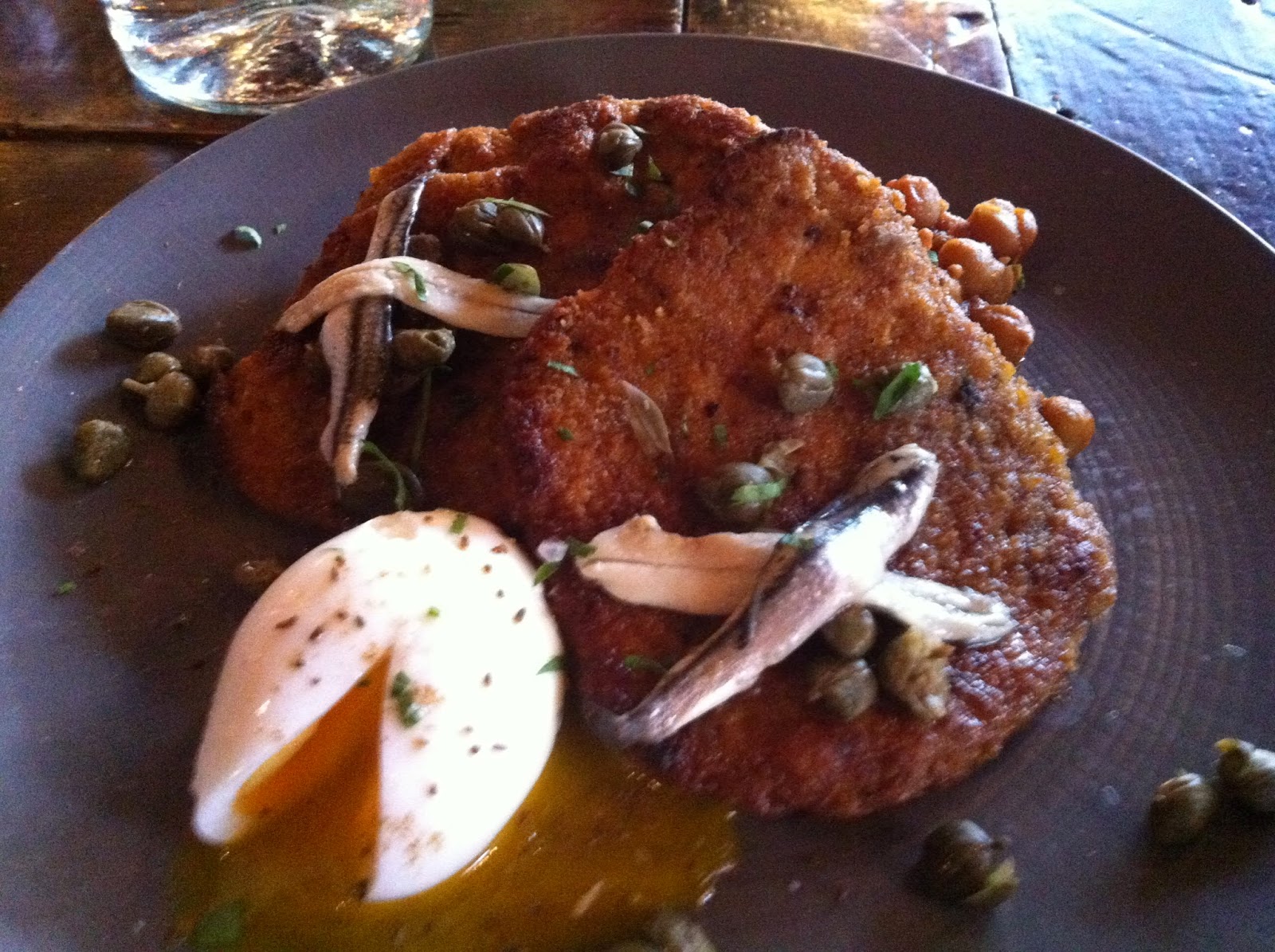 Moving onto Mains, the Schnitzel à la Holstein ($24) had two pork schnitzels topped by a garbanzo bean ragoût, a soft boiled egg, capers and white anchovies. The pork was tender and flavorful, with a nice crunch to the coating, and its flavor was enhanced by the egg. A hearty dish, this should satisfy most diners. 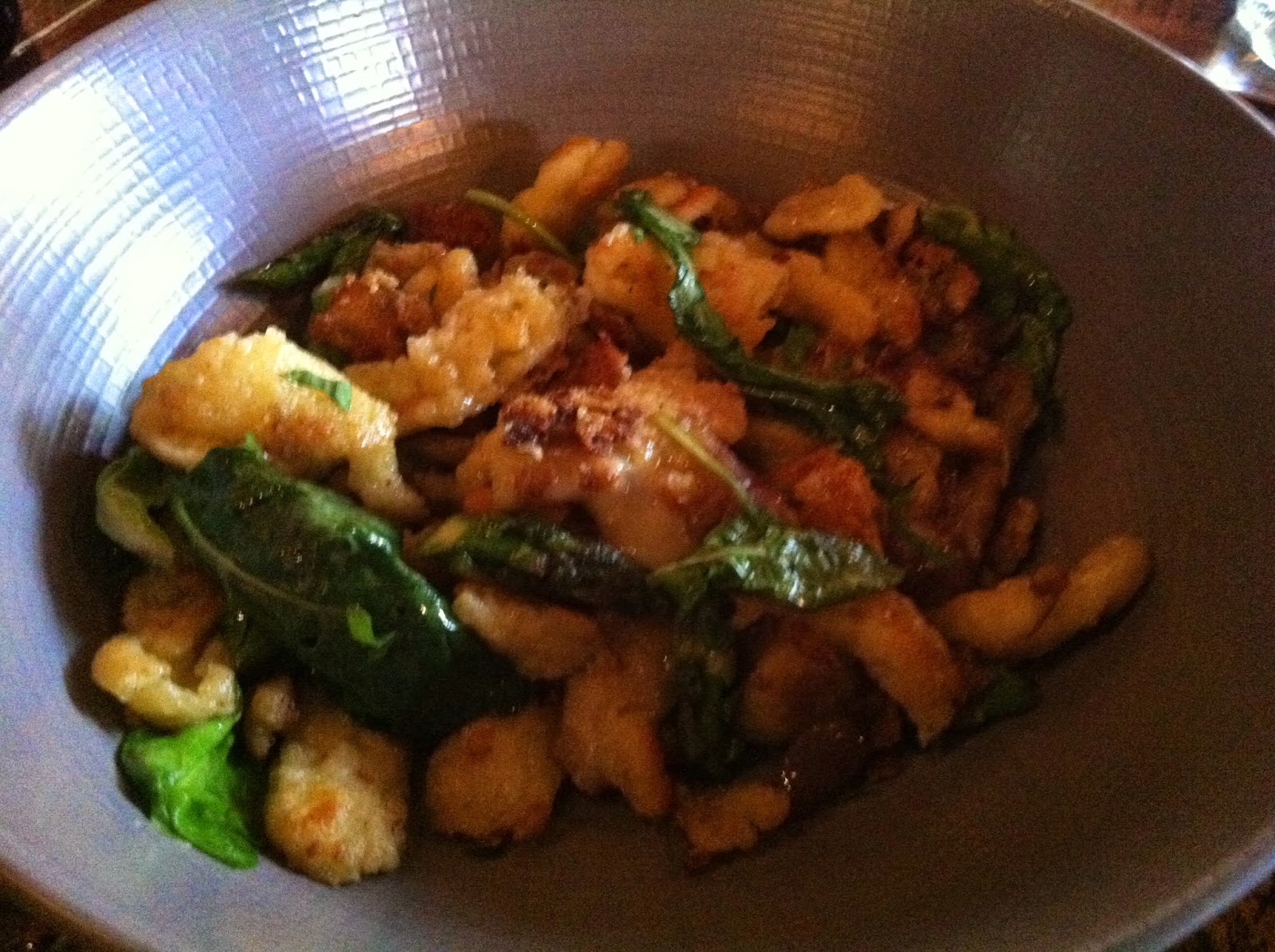 I was especially impressed with the Spätzle ($19), a classic Schwabian pasta with asparagus, red onion marmalade, and Comté cheese. Great comfort food, with perfectly cooked pasta and plenty of melted cheese enhancing the dish. If I had eaten only this Spätzle, I would have been more than satisfied. This is a dish I highly recommend.

The Dessert Menu has 4 choices ($8 each), and we ordered the German Chocolate Cake, which has almonds, coconut, and a vanillensauce. Sweet and decadent, this is a fine way to end your meal. A nice blend of flavors and textures, it is worth saving a bit of room after your meal to order this dish. And it is large enough to share. 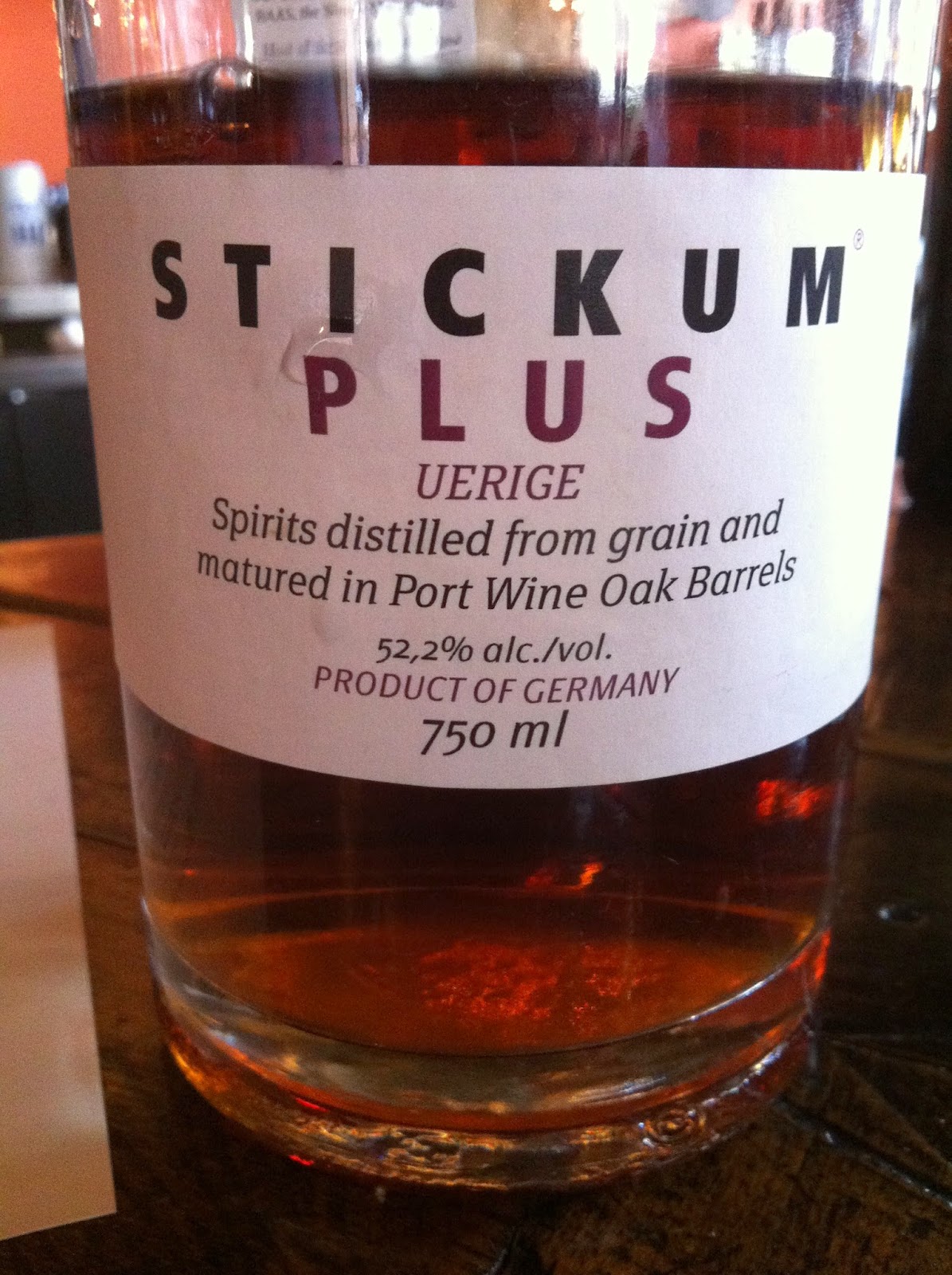 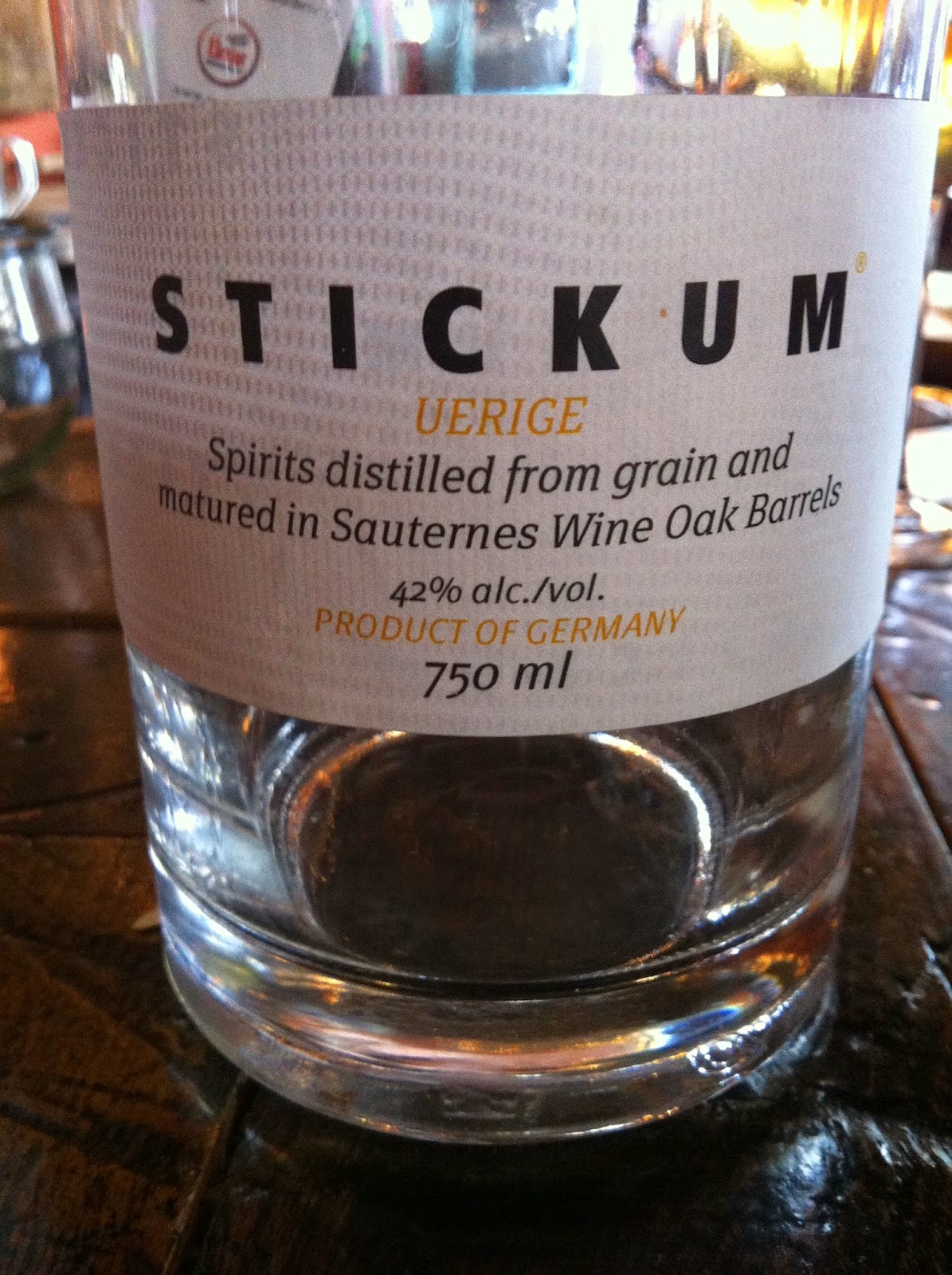 With dessert, we tried the Stickum Uerige, a fascinating beer eau-de-vie, also known as "beer brandy" or "bierschnaps." Bronwyn carries three of their products, the Stickum Uerige, Original ($22), Stickum Uerige, Château d’Yquem Barrel ($25) and Stickum Uerige Plus, Port Wine Oak Barrel ($27). These are very limited production spirits, and it seems they commonly sell for $150-$200 a bottle, which explains the price per glass.

The Château d’Yquem still possesses a flavor of beer, combined with notes of honey, dried fruit and floral elements. My preference was the Port Wine, which had almost no beer flavor, but plenty of concentration, depth and complexity. It does show Port wine characteristics, but you also realize that it is more than Port. There is enough acidity to balance the sweetness, and this may be my new favorite method of drinking beer.

Overall, I had an excellent dinner at Bronwyn, and very much look forward to dining there again. The flavors are compelling, the drinks are interesting, and service was excellent. I think the food is fairly priced for the quantity and quality. Check out Bronwyn for some Schnitzel, Spatzle, & Stickum!

Posted by Richard Auffrey at 8:57 AM