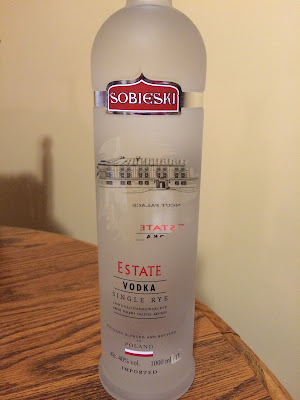 If you think vodka is odorless and tasteless, then you don't know vodka. Sure, under U.S. law, vodka is defined as "neutral spirits so distilled, or so treated after distillation with charcoal or other materials, as to be without distinctive character, aroma, taste, or color." However, the reality is that vodka has a variety of aromas and flavors, though it may be more subtle in nature. If you blind taste tested a variety of different vodkas, you would see how each has its own unique aroma and flavor profiles.

I've written about this before, in my post Subtle Nuances of Vodka, describing a seminar I attended led by Tony Abou-Ganim, a well known mixologist and the author of Vodka Distilled: The Modern Mixologist on Vodka and Vodka Cocktails. We sampled eight vodkas, blind, and there were plenty of clear differences. If all vodka has no aroma or taste, then all vodka would taste the same and no one would have any preferences. That isn't the case and I know I have my own personal preferences for certain vodkas over others because I like their taste profiles.

Back in 2009, I sampled a bottle of Sobieski Vodka, a Polish Rye vodka which cost only about $11. Now, I'm not a fan of most vodka at that price point , finding it too harsh and just not pleasant. However, I found this Sobieski to be an Extreme Value, even better than many vodkas at twice the price. Sobieski has now launched a new vodka, their Sobieski Estate Single Rye ($28), and I received a media sample to taste.

The Sobieski Estate Single Rye is produced, in limited amounts, from 100% Gold Dankowski Rye, grown in Poland, and pure water from the Carpathian Fore. Dankowski rye has been grown in Poland for many centuries and there are two different types, Gold and Diamond, each with its own unique profile.  The Gold type, which is only grown on the Mazovian plans of western Poland, has a very high starch content. As it is only grown in Poland, this makes the Sobieski more unique among the world's vodkas, though there are other Poland vodkas which also use this rye. As an aside, I would be very intrigued to taste a Polish Rye Whiskey made from this grain.

The frosted bottle is elegant, reminding me of some of the higher end vodkas, from Chopin to Belvedere, which also come in frosted bottles. I sipped a glass of the Sobieski on its own, having chilled it first in the refrigerator, and on the nose, I found that herbal notes were most prominent. Tasting, the vodka was smooth and easy-drinking, without the harsh burn you find in some other vodkas. As such, it would be easy to drink this on its own or just on the rocks, without the need for any mixers. It has a bitter edge to its taste but which is balanced by a hint of sweetness, though it has a dry finish.

This Sobieski Estate Single Rye easily fits within the group of higher end Vodkas at this price point and if you enjoy drinking vodka, especially on its own, then you should give this a try. It would elevate your cocktails too if you use it with mixers, though I think it is best on its own. If you want to make cocktails, I'd recommend the basic Sobieski Vodka rather than this higher quality version.
Posted by Richard Auffrey at 9:42 AM