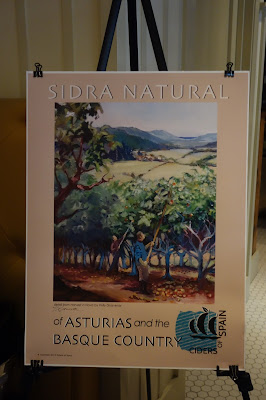 Have you ever tasted a Spanish hard cider?

According to Nielsen, the Hard Cider market grew by an astonishing 71% in 2014, though it seems the growth in the market was much more moderate in 2015. Many consumers are learning about the wonders of hard cider and seeking it out. Though there are plenty of large, commercial cider producers, there are numerous small craft producers as well. These craft producers are creating some delicious and interesting ciders, often in a more traditional cider. This is the time to introduce consumers to new and exciting craft ciders, such as those from Spain, from Asturias and the Basque region.

Yesterday, I attended a trade tasting of some Spanish ciders that are being imported by Ciders of Spain, which is led by James Asbel. While I tasted eight different ciders, I got to ask James a few questions about Spanish cider. The ciders were interesting, some being very different from those ciders familiar to most Americans. And it is about time that Spanish ciders received the spotlight, especially considering Spain is likely the birthplace of cider.

Though the exact origin of hard cider is unknown, evidence tends to indicate that the ancient Celts in northern Spain are likely the originators. They are also thought to be the first to have cultivated domestic apples in Europe. To the Celts, the apple tree was the Tree of Love and the apple itself was considered a lucky fruit. It is no wonder then that they transformed apples into an intriguing alcoholic beverage.

When the Romans arrived in Spain, they were impressed with apple cider and even tried to make some of their own cider from pears, which might also be the origin of perry. The ancient Romans referred to hard apple cider as pomaria and the Arabs, who later settled in the region, referred to it as siserio.

I should note that nowadays, we often separate Cider from Hard Cider, though that division generally didn't exist for much of its history. Hard cider was the norm because all cider will, over time and at room temperature, ferment. It wouldn't be until the arrival of refrigeration that cider could be preserved, prevented from fermenting. Thus, in the rest of this article, when I mention cider, I will be referring to hard cider, especially as most Spanish hard cider producers simply refer to their products as cider.

Almost all Spanish ciders come from one of two regions, either Asturias (where they call it sidra) or the Basque region (where they call it sagardoa). Asturias, located in the northwestern region of Spain, has created a Designation of Protected Origin (DOP) for "Cider of Asturias," regulating and protecting this designation. The DOP currently includes approximately 25 cider houses, 267 growers, and 587 hectares or orchards. Please note though that not all cider producers in Asturias create DOP ciders. Asturias produces about 80% of all Spanish cider and they also drink more than any other region in Spain. In fact, they drink about 90% of the cider they make.


Interestingly, none of these Spanish apple varieties have yet been cultivated in the U.S. In discussing the possible reasons for this with James, he stated that Spanish cider has received so little attention for many years that no one had an incentive to try to transplant those apples elsewhere. In addition, Asturias preferred drinking all of their own cider rather than exporting it, claiming the cider lost its quality when it left the borders of their region. However, as Spanish cider becomes more popular, then maybe there will be a greater emphasis on their apple varieties and other countries might try to plant them.

Asturian ciders are generally fermented with native, wild yeasts and are not fined, thus meaning they might contain some sediment. Their traditional ciders tend to be dry, about 6%-7% alcohol, and have a high acidity. When you visit a sidreria, a traditional cider house, you will often see the server hold the bottle high in the air as he pours the cider into a wide-mouthed cup. This practice, known as escanciar, will assist in aerating the cider as well as making it fizzy.

Beside traditional ciders, Asturias has been experimenting with some new styles such as Nueva Expresión, which are filtered and either still or lightly sparkling. Another style is the Achampañada, commonly labeled as Brut, which is produced through a secondary fermentation in the bottle or fermentation in the tank, creating more of Champagne-style bubbles. There is also Frost Cider, which is similar in some respects to Canadian ice cider. Frost Cider is produced by freezing the juice as the apples ever freeze on the tree. This style tends to create a sweeter, dessert-style cider. 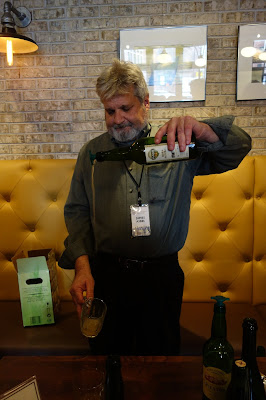 Ciders of Spain was founded by James Abel (pictured above pouring some sidra) back in 2012. A former university professor and architect, James first visited Spain in 1974 and has returned many times since then. He fell in love with Spanish cider and eventually saw an opportunity to introduce their cider in the U.S. James mentioned that as Spanish ciders can be very different, it is only recently, with the great surge in cider interest, that Americans may be ready for these more unique ciders.

Currently, James is importing ciders from four different producers, though he is continuing to grow, adding even more ciders to his portfolio. For example, though all his ciders are now from Asturias, he will be adding a Basque cider in the near future. It is his goal to bracket the category, to present all of the diversity that is found in the world of Spanish cider.  His selection criteria for choosing ciders to import includes those that represent the Spanish character, those which are delicious, those which are interesting, and he also likes to work with experimenters.

You won't find many DOP ciders of Asturias in his portfolio, which might seem unusual for someone promoting Spanish ciders. James feels that the DOP regulations are too strict, such as limiting production to only 22 different types of apples. James believes cider producers should be able to make the best cider that they can, without such restrictions. He wants more diversity in cider, for producers to have the ability to experiment if they so desire.

As an example, some of the Spanish ciders we sampled at the tasting used more than just Spanish apples. These ciders were blends, also using apples from Normandy, France, a region with its own long history of cider production. The primary reason for the use of these Normandy apples is for their greater tannins. However, for me, and some others, this raises issues of terroir, and whether these blended ciders truly reflect a sense of place.

At its most basic, if a cider tastes good, then it is good, generally no matter how it is produced. James is seeking excellent tasting ciders, and in that regard, there is certainly nothing wrong with blending apples from both France and Spain. The blending though blurs the lines of terroir so that it is difficult to say this is truly a Spanish cider with a sense of place. It may be created in a traditional manner, with native yeasts, but you cannot avoid that it also contains apples from a different place, namely France. Terroir is important to some people, and it is a prominent topic in the wine industry, yet it also applies to other alcoholic beverages as well as different foods.

In the wine world, an appellation system exists in most regions with European regions generally having far more restrictions than the U.S. Some wineries opt out of these restrictions so they have the ability to experiment. It then comes down personal preferences whether one likes these experiments or not.  In the U.S., with fewer restrictions, you will find some wineries using grapes from different states to make their wines. You might find a Massachusetts winery using grapes from California. It might be a tasty wine, but it still doesn't truly reflect a sense of Massachusetts. And that matters to some people.

Even if a cider maker does not follow the DOP regulations, they still can produce a cider from only Spanish apples, a cider with a real sense of place. It certainly does not guarantee that it will be a tasty cider, but in the hands of a skilled cider maker, it will likely be good. The same applies to experimental ciders as not all of them will be good either. It is most important to produce a cider that tastes good, and I think it can be even better if it possesses terroir as well.

(The second part of this article will present reviews of the eight ciders I tasted).
Posted by Richard Auffrey at 9:57 AM

Thanks for coming, tasting and commenting! I am in the process of translating a great piece I found on the specific micro-environments in Asturias which are distinct for each of my ciders, and I will share it with you as soon as I have a chance. Of the 8 ciders that you tried yesterday, only two blend imported apples, something which we put right on the table, as you know. Terroir is significant, but our culture has a long, and noble history of blending spices from the ends of the world to make the classic dishes we know as Italian or French. What is most important to me is that our customers know the sources so as to better appreciate the "spice" that a creative producer may use. Especially, as in the case of Riestra Sidra Natural and Guzman Riestra Brut Nature, which we tout as non-traditional, and must, I agree, be appreciated on their own terms. And well, their appreciators, think these are two of the world's great ciders. And, those who have appreciated them the most, so far, have been familiar with the particular qualities of Norman apples.

Ultimately, my approach to life, evolved throughout a career in design, teaching and being a foodie, is that guidelines provide discipline while doctrine stifles discovery. Believe me, I've been all over the place on this, and one's position should definitely be well-calibrated, as the extremes aren't good for art or life. Herding wayward design student calls upon one's conviction about standards, but cultivating their creative capacity depends on respecting their sensibilities as well.

I am with you all the way on the great importance of terroir...up to the point of doctrine. Then, I am out. So much more to discuss. These matters of aesthetics are fundamental to the development of a coherent cider industry and following.

Thanks for bring it up!

Hi James:
Was a pleasure to meet you yesterday. That translation sounds fascinating and I look forward to reading it. I agree with you that doctrine is stifling and there should be room in this world for all styles, types and preferences. Terroir is important but it is far from absolute. You are certainly upfront about your ciders and that honesty is important and welcomed. Look forward to talking to you more about cider issues in the near future.