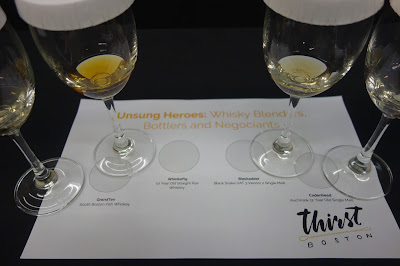 At Thirst Boston, the importance of blending in spirits was stressed several times at different seminars. It is an art form, requiring great knowledge, experience, and a keen nose & palate, which doesn't always receive the recognition it deserves. Proper blending, to create a distinctive but consistent style can be extremely difficult, and might include blending over fifty different bases together. Distillation is obviously quite important, but blending afterwards can be equally as significant. In addition, the barrel aging process is another vital element of the creation of a quality spirit. It is an involved and detailed process, where a myriad of factors can affect the final product.

For additional insight into these issues, I attended the seminar, Unsung Heroes: Whiskey Blenders, Bottlers and Negotiants, which was described as: "Making whiskey is the easy part; making a consistent (and delicious!) product batch after batch is almost impossibly difficult! Pondering the thousands of permutations introduced from aging, blending, vatting, mingling and proofing is enough to make your head swim. Some of the most renowned brands in the world have built their reputation on their blending skills alone: some buy white whiskey and barrel it themselves, others select cherry barrels of different ages and provenances and mingle them, while still others source delicious aged whiskeys and finish it in a variety of barrels. Whatever the method, the final product wouldn’t be what it is without these experts of selection and blending." 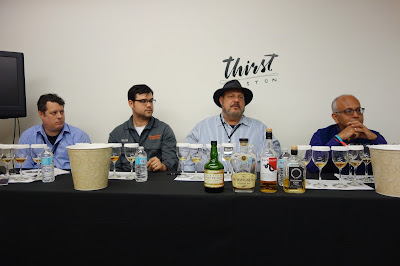 The seminar began with an overview of a number of related topics. Not everyone needs to own a distillery to produce a delicious and compelling whiskey. Blending and bottling has a long history and it wasn't until around 1880 that machine bottling became commonplace. This allowed a more easier transport of whiskey rather than in casks. It also led to a creation of independent bottlers who didn't make their own whiskey. Age statements on whiskey bottles weren't prevalent until the 1970s and there is now a movement away from age statements by a number of producers. There was a mention that blended whiskey has an image problem despite the face that blended whiskies constitute the largest percentage of production. The price of ex-bourbon barrels has been increasing as the demand has increased, from more than just whiskey producers. This has led to Scotland distilleries paying more for barrels. 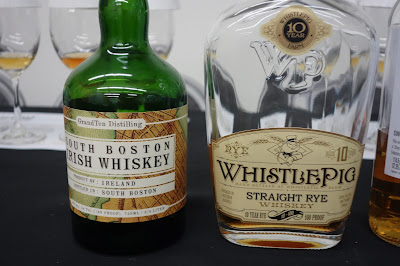 GrandTen Distilling, located in South Boston, is owned by Spencer McMinn and Matthew Nuernberger and was founded in 2010, releasing their first product in 2012. Their distillery is located in a former iron foundry, and they initially learned they had a gas line problem, which wouldn't allow them to generate as much heat as they desired. As such, they needed to distill spirits such as gins and rums, which needed less heat.  I previously enjoyed several of their products and was ready to try their GrandTen South Boston Irish Whiskey (about $25).

Spencer and Matthew thought they had a hole in their portfolio so they decided to add an Irish Whiskey, which also was an homage to the Irish-American heritage of South Boston. It took them some time to find a supplier who could meet their criteria, tasting various samples they received in the mail. They wanted to create an inexpensive product, something which cost at least a few dollars less than Jameson. This would also be an entry way into new accounts, an inexpensive product which also tasted good. They receive the Irish whiskey in bulk and then bottle it at their distillery.

Their Irish Whiskey has been in the market for about three years and they have been aiming for a consistent taste. There is a batch statement on each bottle and the current batch is #9. This Irish Whiskey is made from 100% barley, both malted and unmalted, and has been aged for 3 years and 1 day in ex-Bourbon barrels. With a light amber color, this whiskey had an interesting noses of bananas and citrus, with mild spice notes. On the palate, it was light and creamy, with nutty flavors, some citrus, a light sweetness and mild baking spices. An easy drinking Irish whiskey that is a very good bargain as well In the future, GrandTen hopes to release a higher end Irish Whiskey. 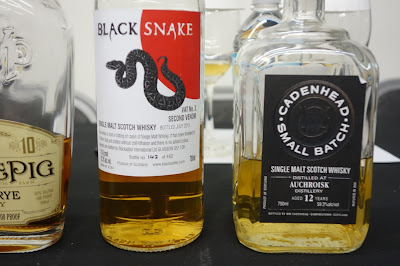 Raj Sabharwal, of PVI Global, is a small importer, generally of family owned and small independent distilleries. I've already written about a couple of their other whiskey products, the Amrut Fusion Single Malt and the English Whiskey Co. Peated Cask Strength.

Black Adder is an independent bottler in Scotland which was established in 1995. Once, pubs in Scotland served whiskey out of the cask, produced by whatever distillery was closest to them. Black Adder wants to hearken back to those days, choosing to bottle only more "natural" whiskey, which hasn't been chill filtered or had anything added to give it color, such as caramel. All of the whiskey he bottles is produced and aged in Scotland.

The Black Adder Black Snake VAT 3 Venom 2 Single Malt (about $80) uses a Solera system from a single malt producer. Started about two years ago, they remove about 2/3 of the whiskey from a barrel and then add new whiskey to refill it. It is either finished in Oloroso Sherry or PX Sherry barrels though this particular whiskey was finished in Oloroso barrels, which it sat in for about a year.  Each time they remove some whiskey from the barrels, they label it as Venom, so this whiskey was removed for the second time. It is bottled at 114 proof and initially, only 60 bottles were available in the U.S. They have created a new vat, specifically for the U.S., so the supply will be increased in the near future. This whiskey was strong and powerful but with an elegance that balanced it. The flavors were intriguing, a melange of white pepper, honey, vanilla, fennel, floral notes, and hints of aged Sherry. Definitely recommended.

Cadenhead is the oldest independent bottler of whiskey in Scotland, established in 1842. The Auchroisk distillery, located in the Speyside, was founded in 1972 and released its first whiskey in 1978. They used to provide bulk whiskey for J&B Scotch and rarely saw their own released but eventually decided they should market more of their own whiskey. The Cadenhead Auchroisk 12 Year Old Single Malt is a single barrel bottled at 59.3% ABV and aged in ex-Bourbon barrels. It possessed a light body, with tropical fruit flavors, some floral notes and a touch of smoke. A pleasant Whiskey.

Stop being prejudiced about whiskey that doesn't come directly from a distillery. Blenders, bottlers and negociants can produce some amazing whiskey and you'll miss out if you ignore them out of your biases.
Posted by Richard Auffrey at 3:00 AM