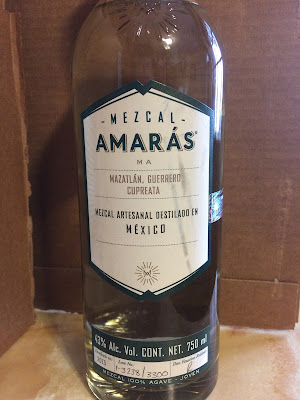 “Mescal is a Mexican spirit, strong and pungent, and is made from the milk of the Maguey plant or cactus. He who has not indulged in a tipple of Mescal with a garniture of salt, has missed something the native Californian will tell you, and he is right. Mescal, however, has the same effect upon the average American as ordinary firewater upon an Apache Indian. With a load of it he is liable to run amuck at any moment and vermilionize a whole city.”
--Los Angeles Herald, August 6, 1888

I have a fondness for Mezcal, that Mexican spirit which is often made by small families using traditional techniques. You can read some of my previous Mezcal articles, such as Mezcal & Beyond, Mezcal Bars in the Boston Area, Amuleto Mexican Table, Mezcal Vago & "A Slap To The Face", and Rant: 400 Rabbits Say "Drink More Mezcal". While perusing the shelves at The Wine Press, I noticed a Mezcal brand that was new to me, Mezcal Amarás, and Aaron, one of the owners of the shop, highly recommended the Mezcal Amarás Cupreata Joven to me so I bought a bottle.

Back in 2010, Mezcal Amaras was originally founded in Mexico as Mezcal Amores by a group of friends who developed a passion for Mezcal. The U.S. Alcohol & Tobacco Tax & Trade Bureau (TTB) opposed the name of the brand so they changed it to Mezcal Amaras for import into the U.S. In Spanish, the term "Amarás" means "you will love."

They are dedicated to sustainability and their website states: "Mezcal Amarás works only with sustainably cultivated agaves as part of their commitment to ensuring the long term preservation of the species and its biodiversity. Mezcal Amarás also plants ten agaves for each agave used in order to generate work in the community and maintain sustainability over the long term." There is plenty of discussion about agave sustainability in the mezcal community and paying attention to this significant issue is vital to the continued existence of the mezcal industry.

Besides ecological sustainability, Mezcal Amarás is also dedicated to the economic sustainability of the mezcal business, and their site also states: "To further support the communities, Mezcal Amarás reinvests 15% of their gross profits to improve ecological, economic and social sustainability in the mezcal producing regions where the companies works."  In addition, "The compensation for everyone who works in the manufacturing process of Mezcal Amarás, including agave producers, jimadores and distillery workers, is at least 20% higher than the local average." Very worthy objectives.

As for the Mezcal Amarás Cupreata Joven, it is produced in the village of Mazatlán, in the state of Guerrero, and its Master Mezcalero is Don Faustino Robledo. It is made from 100% Cupreata Agave, also known as Papalote, which is a rare plant found in Guerrero on certain mountain slopes in the Rio Balsas basin. This agave generally takes about 13 years to mature and is said to provide a vegetal profile to its mezcal. Once the agave is harvested, it is cooked for about five days in a conical stone oven, fueled by sustainable red oak logs. A mechanical shredder is then use and the juice is then fermented in small ayacahuite wooden vats. It will then be double distilled in copper pot stills.

I found this to be an intriguing Mezcal, with a complex melange of aromas and flavors. On the nose, you'll find hints of citrus and forest notes while on the palate, there is a complex blend of vegetal elements, some tropical fruit notes, and spice hints, with a mild smokiness primarily on the finish. Each sip brings new flavors to your palate and you'll love spending time slowly sipping and enjoying all you will find in this Mezcal. Highly recommended.

You can pick up at bottle at The Wine Press, though if you can't make it there, the Mezcal is imported by Anchor Distilling so you can also obtain it from any wine shop that deals with Anchor.
Posted by Richard Auffrey at 10:09 AM