“That was the end of life, but the qvevri is the beginning of life for wine,” he continued. “It is the womb.”
--For the Love of Wine: My Odyssey through the World's Most Ancient Wine Culture by Alice Feiring

It is impossible to understand Georgian wine without knowing something about qvevri (or kvevri), giant earthenware vessels which may be used to ferment and age wine. Also known as churi in Western Georgia, use of these vessels extends back thousands of years, with proto-qvevri vessels reaching back to the Neolithic era. I'm going to provide some basic information about qvevri, but please note that this is a much more expansive subject.

Other synonyms for Georgian qvevri, or earthenware vessels of different shapes and sizes, include: dergi, lagvini, lagvani, lagvinari, kvibari, kubari, lakhuti, chasavali, khalani, and kotso. Other countries had their own earthenware wine vessels, from the Greek pithos to the Roman dolium, or other vessels such as amphorae, tinaja and giara. However, many of those other vessels were used more for storage and transport rather than fermentation and maturation.

Qvevri production is, in many respects, a dying art, though there are efforts to ensure its continuation. Historically, traditional qvevri-producing areas includes the villages of Atsana in Guria; Makatubani, Shrosha, Tq'emlovana and Chkhiroula in Imereti; and Vardisubani in Kakheti. The production techniques were passed down for generations through families. Qvevri are made from baked clay, using the built-coil method, and red clay is the most common though some claim that black clay, from Western Georgia is the best, though  there may not be anyone currently producing qvevri from black clay.

Selecting the clay for qvevri is important as the clay needs to be free of impurities, not too porous, and possess the proper mix of mineral. Once the qvevri has been properly fired, the inside is lined with propolis, also known as bee glue, which is a combination of beeswax, saliva and secretions from botanical sources.

Once grapes have been crushed, the juice, along with the skins, seeds and stems, are placed into a qvevri, which is buried underground, helping to keep the wine cool, stable and safe. This natural temperature control helps to make the fermentation proceed well and without incident. In addition, the clay helps with micro-oxygenation, also providing some nutrition to the wine. The extended skin contact in the qvevri will commonly darken the wine, plus qvevri wines tend to be more tannic, including the whites.

Not all Georgian wineries use qvevri, and some wineries only use them for some of their wines, but its use seems to be expanding. It is a link to their historic past, and the wines can be delicious and unique, interesting and compelling. There is also a push for the use of qvevri in making more natural wines. Amphora use is expanding throughout the wine industry across the world, but the Georgian qvevri still retains its own uniqueness. In 2013, the United Nations even added qvevri to their UNESCO Intangible Cultural Heritage list.

All of the wines I'm reviewing in this post are part of the Corus Imports portfolio. Corus, which was founded in 2006 and is located in Connecticut, is an importer and distributor of wines and spirits, including wines from Georgia and France, Georgian Chacha, Georgian Brandy, and Russian & Canadian Vodka. 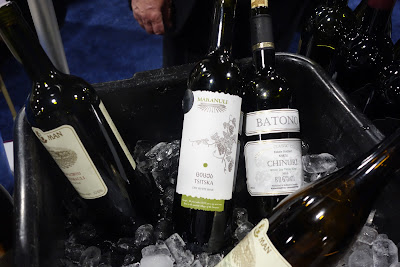 The Batono Winery, founded in 2013, has vineyards in the micro-zones of Sagarejo (in Kakheti), Napareuli (in Kakheti), and Ambrolauri (in Racha-Lechkhumi & Kvemo Svaneti). Their winery is located near Sagarejo vineyards, and their name, Batono, means "lord" and is a form of polite address.

The 2015 Batono Chinuri ($12) was interesting and delicious, with notes of ripe pear and melon, accompanied by some herbal accents. Easy drinking, but with some complexity, good acidity, and a nice texture. Excellent value wine. The 2015 Batono Qvevruli Saperavi ($20), which is made with both qvevri, and oak, was easy drinking, with bright red cherry, raspberry and plum flavors, hints of spice, and a touch of vanilla. The 2015 Batono Qvevruli Tetri ($20), which is made with both qvevri, and oak, is a blend of 40% Kisi, 40% Mtsvane and 20% Rkatsiteli grapes. This was a fascinating and delicious wines with a unique melange of spice, dried fruit, herbal accents and a touch of eucalyptus. Each sip brings a new flavor combination to your palate and this is a wine to savor and enjoy over time. Highly recommended and a very good value. 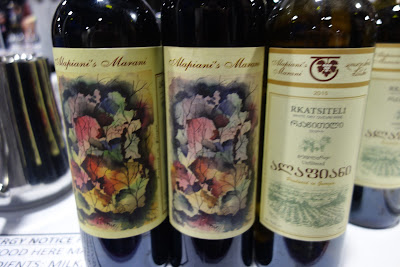 The Alapiani Marani has made wine for over 20 years, but they only formed a company and began bottling wine in 2011. They have vineyards in the regions of Kartli and Kakheti.

The 2015 Alapiani Rkatsiteli ($20), fermented in qvevri, was aromatic and spicy, reminding me in some ways of a Gewürztraminer. There were also dried fruit flavors, with a mineral backbone, and some white pepper on the finish. Very interesting and tasty wine. The 2016 Alapiani Tavkveri ($25), made from a grape usually used for Rosé wines and fermented in qvevri, was crisp, dry and light bodied, with pleasing cherry and raspberry flavors with herbal accents. An elegant and easy drinking red wine.

I was thoroughly impressed with the 2015 Alapiani Shavkapito ($25), produced from the Shavkapito grape which is new to me and appears to be rare even in Georgia. Its name means "vine with a black cane" and is said to be terroir-reflective. The grapes were sourced from a vineyard in the Okami village of the Shida Kartli region and the wine was fermented and aged in qvevri. With an alluring aroma of black fruit and herbs, the wine presented with a fascinating melange of flavors, including ripe plum, blackberry and black cherry, along with herbal accents, a smoky note, and a touch of spice. Lots of complexity, smooth tannins and a lengthy, pleasing finish. Highly recommended.

The Telavi Wine Cellar, founded in 1915, is located just outside the city of Telavi, in the Alazani Vallet of Kakheti. Some of their vineyards extend back hundreds of years, such as their Kondoli vineyards which were mentioned as far back as 1742. The winery has about 240 hectares of Kondoli vineyards, mostly planted with indigenous varietals though they grow a few international ones as well. They also have vineyards on the left bank of the Alazani River, in the Kindzmarauli area, and one in the Napareuli area. Telavi has a few different labels, including Marani and Satrapezo.

The NV Marani Sparkling White Brut ($11) is dry and lightly effervescent, with bright peach, citrus and almond notes, and a hint of toast. A tasty and easy drinking bubbly, with plenty of complexity for this excellent value wine. The 2015 Marani Kondoli Mtsvane-Kisi ($14) is fresh, crisp and dry, with pleasing flavors of peach and tropical fruits, enhanced by some floral notes and spice accents. This seems very much like a summer wine, and while drinking it, it will make you think of a tropical island.

The 2013 Satrapezo Mtsvane ($30) was fermented for 5 months in qvevri and then spent 10 months aging in new French oak. It was crisp, dry and aromatic, like Gewürztraminer, with some tropical fruit flavors, a buttery texture, and spices notes. 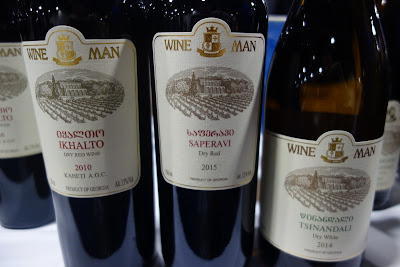 The Wine Man is a family-owned winery, founded by Alexandre I. Jorjadze in 1998, and his family has a history of winemaking.

The 2014 Wine Man Tsinandali ($10), a blend of 85% Rkatsiteli and 15% Mtsvane, which is fermented in stainless steel. It is fresh and crisp, with tasty apple, pear, and lemon flavors, with mild hints of spice and vanilla. An easy drinking and tasty wine at a very good price point. The 2015 Wine Man Saperavi ($11) is also easy-drinking, with tasty red fruit flavors, low tannins, and a smooth finish. Another value wine.

The 2010 Wine Man Ikhalto ($12) is a blend of 50% Saperavi and 50% Cabernet Franc, one of the few Georgian wines I tasted with an international grape. The wine was fermented in stainless steel and aged for 6 months in old oak. With a tasty blend of cherry and black cherry, plum and raspberry, the wine also had peppery notes, restrained tannins, and a full body. The finish was long and pleasing, this would be a fine wine with barbecue or a steak. The 2014 Wine Man Mukuzani Saperavi ($12) also spent 6 months in oak, and was delicious, with ripe red and fruit fruit flavors, mild spices, and a hint of vanilla.

Which Georgian wines did you enjoy at the Boston Wine Expo?
Posted by Richard Auffrey at 3:00 AM