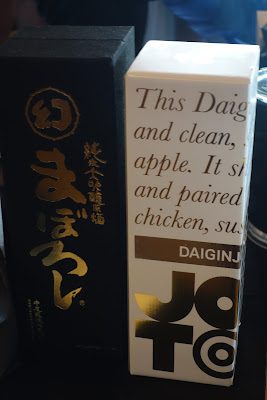 "Sake is this kind of product that once you begin to understand it more, the more passion you have for it and the more enjoyment you get from it."
--Liwen Hao in Wine Advocate #229

The Wine Advocate is back at it, scoring Sakes, and I still vehemently disagree that it will be helpful in promoting Sake. In fact, I believe it is most likely to have an opposite effect, driving away the average consumer from purchasing Sake. It's great to see Sake reviews but they don't need numeric scores!

In the newest issue of the Wine Advocate (February 2017, #229), Liwen Hao, the Asian Wine Reviewer for Wine Advocate, once again wrote an article about Sake as well as reviewing 21 Sakes. In his article, The Sake Trail, Liwen described his visit to Japan this winter, with stops in Kyoto, Nada and Saijo. He visited numerous breweries in these areas, and his article notes the importance of water sources for Sake brewing, Sake rice types, and the issue of terroir. There were some beautiful photos that accompanied the article. It was a nice article, though he didn't go into as much depth as I would have preferred, though that isn't a significant criticism.

In the prior issue #226, Liwen reviewed 78 Sakes, all Junmai Ginjo and Junmai Daiginjo, and rated them from 90-98 points. For the new issue #229, Liwen only reviewed 21 Sakes, 15 which were Daiginjo, and the remaining 6 were a mishmash of types, surprisingly including a Futsu-shu. This time, the range of scores ranged from 80-96, though of the 6 Sakes that earned 90+ points, 5 received 90 or 91 points, and 1 received 96 points, the Honda Shoten 1996 Tatsuriki Akitsu Junmai Daiginjo. The lowest scoring Sake, at 80 points, was the Gekkeikan Jyosen Karakuchi Futsu-shu. A number of these Sakes are already imported into the U.S.

So far, the Sake article and reviews have not been discussed on the Wine Advocate's Bulletin Board or on the Wine Berserkers forum. It is apparent the new reviews aren't sparking sufficient interest to get these people to discuss Sake. And if they aren't discussing it, then they probably agent's drinking it either. I also have not yet seen any other online articles referencing these new Sake reviews. The reviews haven't apparently initiated any significant discussions anywhere and it is hard to believe they are going to have any significant, positive effect for Sake in general. I'm waiting to see if the prices of the reviewed Sakes rise, as they did when issues #226 was released.

The Editorial Calendar for the Wine Advocate notes that for the rest of 2017, there is only one other Sake article scheduled, for issue #230, at the end of April, and it is titled "Good Value Sakes." The Wine Advocate should have tried to schedule a Sake article for near October 1, International Sake Day. That is a missed opportunity. And after April, the Wine Advocate will have eight months of no Sake coverage which won't help promote Sake.

Sake articles and reviews are great, but we don't need Scores. Such Scores will cause more harm than good and read my previous posts on the subject for the myriad reasons why that is the case.

Let me repeat once again: Sake doesn't need numeric scores!
Posted by Richard Auffrey at 2:30 AM