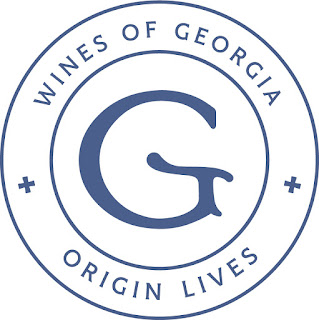 "Wine is the Georgians’ poetry and their folklore, their religion and their daily bread."
--For the Love of Wine: My Odyssey through the World's Most Ancient Wine Culture by Alice Feiring

The country of Georgia may be the birthplace of wine, with evidence stretching back about 8,000 years, which is why Georgians sometimes state they have 8,000 vintages of history. Georgia is located at the crossroads of Western Asia and Eastern Europe, in the Southern Caucasus mountain range, which forms the northern border of the country. It is bordered on the west coast by the Black Sea, by Russia to the north and Turkey & Armenia to the south, with Azerbaijan to the south and east.

Despite its lengthy history of wine, its modern wine industry is relatively young, still recovering from when the Soviet Union controlled the country. During those dark times, it was much more important to create quantity rather than quality, and numerous grapes were pulled out of the vineyards, to make room for grapes which could provide larger yields. Since attaining their independence, Georgian wines have been increasing in quality, honoring old techniques and traditions with the use of modern technologies. It is time now to start paying attention to their wines.

“In no other country do the inhabitants drink so much, or such excellent wine.”
--Jean-Baptiste Chardin, referring to the country of Georgia in his ten-volume The Travels of Sir John Chardin (1786)

First, Georgian wine has a lengthy and fascinating history.
Wine making in Georgia extends back over 8000 years and almost no other country can boast of such a lengthy wine making history. Some even believe that the word "wine" is derived from the Georgian word "gvino" which means "wine." Georgian wines were renowned by both the ancient Greeks and Romans. In the 12th century, they established the first wine-making academy in the world. Some of their indigenous grapes also have a lengthy history, some thought to be at least 5,000 years old. Each sip of such a wine beings with it a sense of history, a connection to the ancient past. Taste the millennia in a glass of Georgia wine.

Second, Georgia has many unique, indigenous grapes.
There are over 525 indigenous grapes in Georgia, though there once was over 1000, with many lost over the centuries. Currently, only about 38 grapes are used for wine production. You'll find white grapes including Chinebuli, Kisi, Krakhuna, Mtsvane, Rkatsiteli, Tsitska, and Tsolikouri. You'll also find red grapes including Ojaleshi, Otskhanuri Sapere, Saperavi, Shavkapito, and Takveri. They present unique flavors and aromas, though still offering some familiarity. Any wine lover seeking to broaden their palate, to experience something new, should seek out such unusual grapes which may be found only in Georgian wines. I love exploring unusual grapes and Georgian wines allow me to further enhance my experiences. Yes, they grow some international grapes but why not pay attention to the unique, indigenous grapes that often cannot be found elsewhere.

"They clung to their ghvino (wine) with such a passion you’d think it was their blood."
--For the Love of Wine: My Odyssey through the World's Most Ancient Wine Culture by Alice Feiring

Third, Georgian wines are diverse.
Georgian wineries produce a myriad of different wines, including White, Red, Sparkling, Rosé, Semi-Sweet, Dessert and Qvevri wines. These wines come in a wide variety of flavor profiles and styles so there should be something available to appeal to any personal preference. In addition, there are many different terroirs in Georgia, in 18 different appellations, which further leads to diversity in their wines. Georgia wines are multi-dimensional and there is much to discover in that multitude. No matter what kind of wine you enjoy, you should be able to find a Georgian wine that coincides with your favorite kind.

Four, Georgian wines are made for food.
Georgian wine is a natural pairing for food, possessing a versatility that extends into many cuisines. Georgians always drink wine with food so it is produced specifically to be accompanied by food. If you purchase a Georgian wine, you can be almost assured that it will pair well with some type of food. Dependent on the type of food, there is also probably a type of Georgia wine which will work well with that dish, from seafood to steak, pasta to chicken. You could have an easy drinking Saperavi with a burger or pizza, or enjoy a Qvevri Rkatsiteli with roast chicken.

Fifth, Georgian wine culture is fascinating.
Wine is an integral component of Georgian culture, from the revelry of the rtveli, their grape harvest, to the supra, a traditional feast. At a supra, a tamada, a toastmaster, is selected to lead the evening, who will lead a multitude of toasts, maybe 20 or more, which will honor family and friends, events in the past, present and future, and much more. However, they space out the toasts so no one gets too intoxicated. Many Georgians grow their own vines, also making their own wines, and it is said that Georgians once would first ask about their neighbors’ vines and only then ask about their families. It is also said that Georgians drink wine to share emotion, such a powerful sentiment.

Six, there's good value in Georgian wines.
As many wine lovers are concerned about price, Georgian wines should be appealing as you'll find a fair number of tasty wines for under $15, making them very affordable options. The fact Georgia wines are not as popular means they are more hidden value wines. Some wine regions, due to their popularity, raise their prices commensurately. In addition, as Georgia does not yet have a trophy wine culture, they do not produce a large amount of high-end wines, though I have tasted a some excellent, higher-end Georgian wines. Their value wines are an excellent entry to experience all that Georgian wine has to offer.

Seven, there are a growing number of natural wines in Georgia.
When Georgia attained independence, after the massive industrialization of the wine industry under Soviet control, a number of wineries reached back into their history, embracing more traditional wine methods. These methods tended to be more natural, avoiding chemical additives and over-manipulation. Some vineyards are now organic or Biodynamic too. Natural wines aren't necessarily better, but the natural wines coming out of Georgia tend to be very good. Maybe it is partially because of their lengthy history of making more natural wines.

Eight, the ancient Qvevri will intrigue your palate.
Qvevri are clay vessels used for wine fermentation and aging, and have existed for thousands of years in Georgia. They are commonly buried in the earth, to keep the wine cool and stable.  It is intriguing that the source of the clay can contribute its own terroir to the wine. The qvevri tend to darken the color of the wine, creating what some consider to be "orange wine," while also making them more tannic. Other countries have tried to emulate qvevri, using their own types of clay vessels. I find the taste of many qvevri wines to be fascinating, with an added complexity. It also adds a sense of history to these wines.

“That was the end of life, but the qvevri is the beginning of life for wine,” he continued. “It is the womb.”
--For the Love of Wine: My Odyssey through the World's Most Ancient Wine Culture by Alice Fearing

Nine, nearly everyone will enjoy Georgian wines.
There is no reason why almost all consumers won't enjoy Georgian wines. These wines are often easy drinking, absent of strange and off-putting flavors, though some of the qvevri wines might not always appeal to the average consumer. At various tastings, I've witnessed numerous consumers take their first taste of a Georgian wines and seen the pleasure on their faces. The main reason Georgian wines don't sell as well as they should is due to unfamiliarity and ignorance. Most consumers, and many wine shop owners, know little about Georgian wines so they gravitate instead to what they already know. That can be overcome with greater education and more tastings. People need to be shown they are missing out on Georgian wines.

Ten, and most importantly, Georgian wines are quite delicious.
It is a simple thought but sometimes gets forgotten amidst everything else. In the end, the most significant aspect of ant wine is that it tastes good. No matter what else a wine has going for it, if it does not taste good then it has failed. I've enjoyed many tasty Georgian wines, certainly not everything I have tasted, but the vast majority at least. I may appreciate Georgian wines for many different reasons, but first and foremost, taste remains the most compelling reason to drink Georgian wines.

So, are you convinced to give Georgian wines a try?
Posted by Richard Auffrey at 2:30 AM