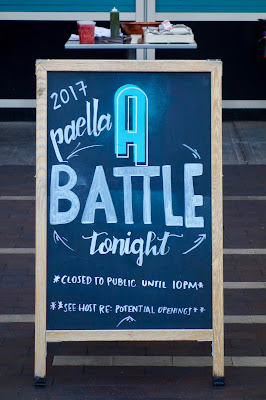 Kramer: Have you ever had really good paella?
Morty: Not really.
Kramer: Oh, it's an orgiastic feast for the senses."
--Seinfeld episode "The Raincoats" 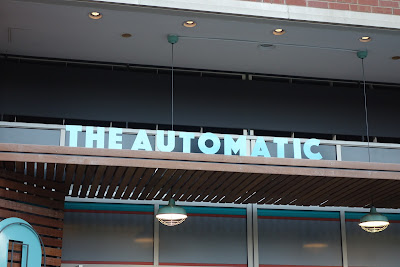 Last night, famed local chefs Chris Schlesinger and Jamie Bissonnette faced off against each other in a pugilistic cook-off to see which chef could create the Best Paella. This culinary competition took place in front of a packed crowd at The Automatic, and I attended as a media guest. All of the attendees were able to vote for their favorite Paella and the winner was.....

Well, I'll hold off on that announcement until later in this post. 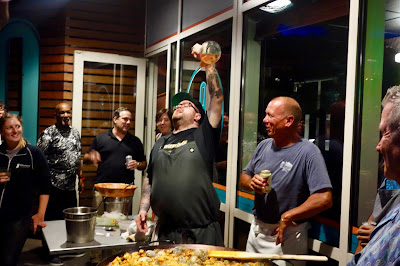 Chris Schlesinger is a James Beard award-winning chef, the founder of East Coast Grill and the author of several books. Most recently, he opened The Automatic with his friend, legendary bartender Dave Cagle. Chris's Paella recipe has become famous, even featured in The New York Times. Jamie Bissonnette, of Little Donkey, Toro, and Coppa, is also a James Beard award-winning chef and can brag about his Paella too. He headlined this year’s Food &Wine Classic in Aspen, showcasing his Paella to the massive crowds. Two culinary powerhouses, creating their own spin on a classic Spanish dish.

Paella is a Spanish rice dish that likely originated in the region of Valencia, on the eastern coast of Spain, during the 19th century but its roots extend back over 1000 years. Over 1200 years ago, the Moors introduced rice to Valencia, which would subsequently become one of the most important rice-producing areas in all of Spain. The exact origins of paella are a bit murky and there are numerous origin stories, some which appear to have been created mainly to make a fascinating story.

For example, one story suggests that Moorish servants created paella-like rice dishes for their families using leftovers from royal banquets. Thus, it has been claimed that "paella" derives from the Arabic word "baqiyah," which means "leftovers." Another more fanciful tale states paella was created by a man for his lover, and that "paella" is a corruption of the phrase "para ella," meaning "for her." It seems more likely that the word "paella" derives from the Latin word "patella," which means "pan."

The term "paella," which is commonly used to refer to the food, actually refers to the "cooking pan" and not the rice dish itself, making the Latin origin apt. The dish is more properly referred to as "arroz a la paella" though most everyone nowadays just refers to the dish as paella. Interestingly, the term "arroz," which means "rice," is derived from Arabic, which makes sense as the Moors introduced rice to the region. 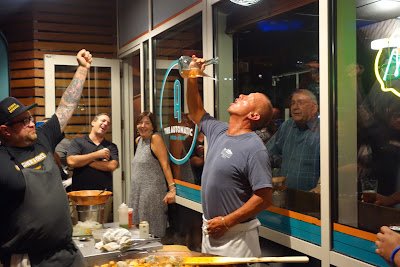 "Valencians have the confident belief, to me it seems well-founded, that nobody knows how to cook rice better than them."
---Francisco de Paula Martí (1818)

We know that during the 19th century, field and farm workers commonly prepared paella, using rice and whatever else was readily available, and cooking it over a wood fire. The first known written recipe for paella appeared in 1840. The first paellas, even in Valencia, didn't contain seafood, and might have instead snails, chicken, rabbit or duck, plus vegetables like green beans, tomatoes and onions. Over time, as seafood was common in the region, it began to be added to some paella dishes.    Today, there are many, many different varieties of paella.

The traditional paella pan is large, round and flat, with a relatively short height, allowing the rice to have maximum contact with the bottom of the pan. The expensive spice saffron has also become an important ingredient for paella. A number of different rice types may be used, including Bahía, Senia, Leda, Balilla, and Bomba, with the common element being that these rice types can absorb plenty of liquid and flavor. Bomba seems to be the top choice of many Spanish chefs. And please note that March 27 is considered National Paella Day.

Which wine should you pair with Paella? It will depend in part on what type of paella you are enjoying, whether it has more seafood or other types of meat. I would begin by suggesting you drink Spanish wine, though obviously plenty of wines from other regions would work well too. Sticking with Spanish wine, my top choice would be Sherry, especially a Fino or Manzanilla if the paella has seafood. If the paella is more meat heavy, then I'd suggest an Amontillado or Oloroso Sherry. A dry Spanish Rosé would also work well with most Paella. I'd even recommend Cava, a Spanish sparkling wine. With seafood-heavy paella, white wines, like Albarino and Godello, would be nice choices, and for meat-heavy paella, red wines like Mencia, Rioja, and Garnacha would work nicely. 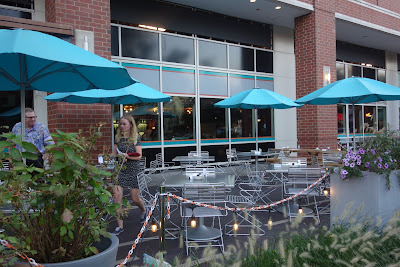 About ninety people attended the Paella Showdown, with some people, including myself, sitting outside and the weather cooperated, a fine evening for sitting on the patio. As we enjoyed some wine, servers came by with appetizers, including Patatas Bravas, Datiles con Jamon, Tortilla Espanola, and Pintxo de Gambas. All of them were tasty, especially the Datiles con Jamon, dates with blue cheese, wrapped in Serrano ham. I was drinking an excellent Sherry, the Alexander Jules Fino 22/85, which was a superb pairing with the appetizers as well as later with the paella. 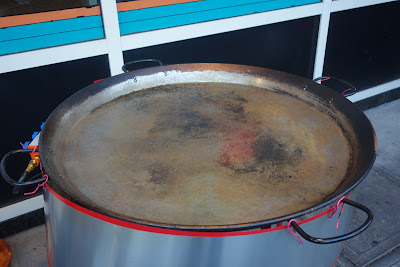 This is Chris' paella pan and it's obviously well-used. 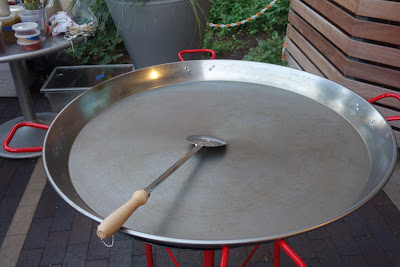 On the other hand, Jamie's paella pan seems much newer. Will this affect the competition? 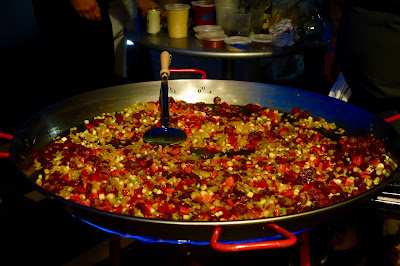 Jamie began cooking his paella first and the following are a number of pictures showing his progress. 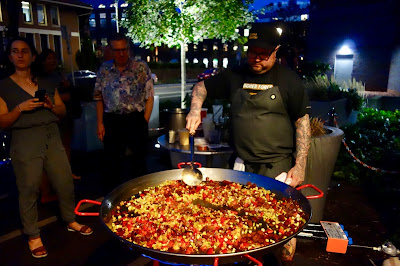 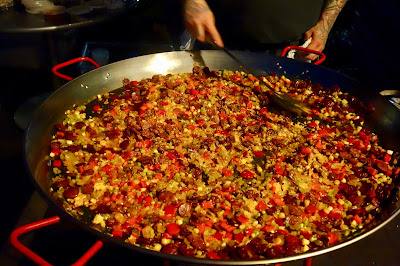 While the paella cooked, incredibly alluring aromas wafted through the air, making us eager to taste the paella. 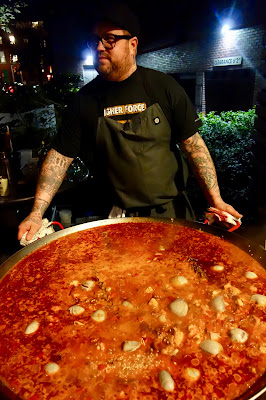 As you aren't supposed to stir the rice in the paella, Jamie is turning the large pan about a quarter turn, which will help mix everything. 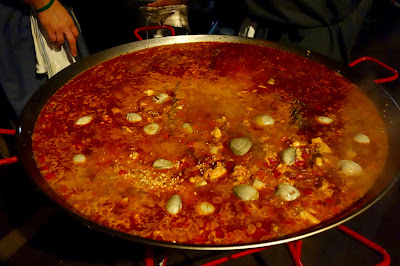 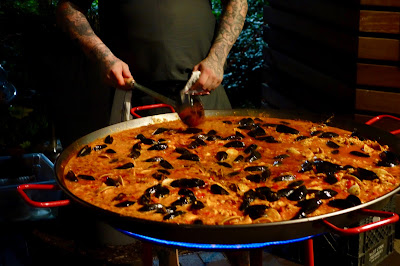 Jamie added mussels to his paella. 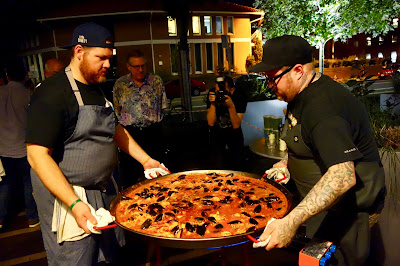 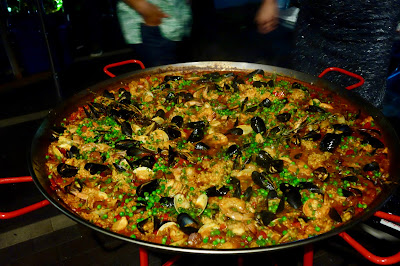 And this is the finished paella, which looks beautiful! 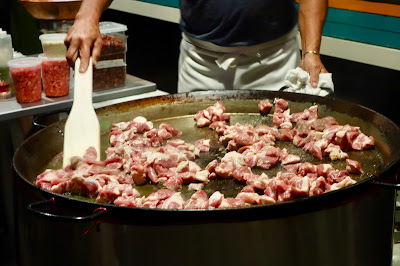 Chris started his paella after Jamie was about half done with his paella. 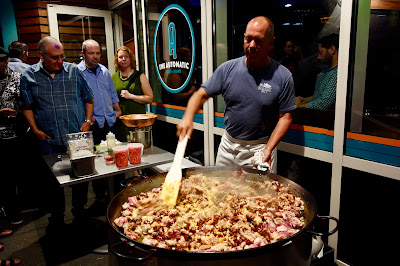 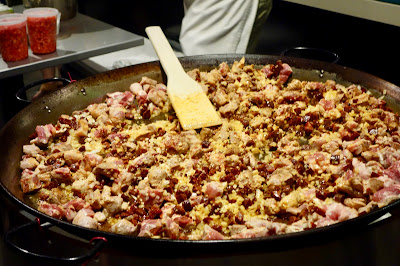 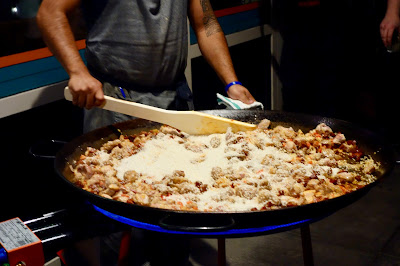 Adding rice to the paella. 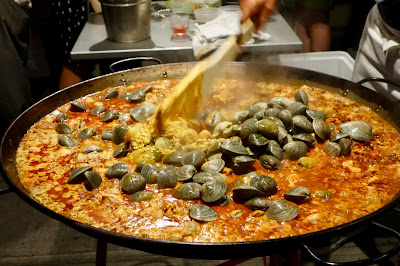 Chris dug these local clams himself. 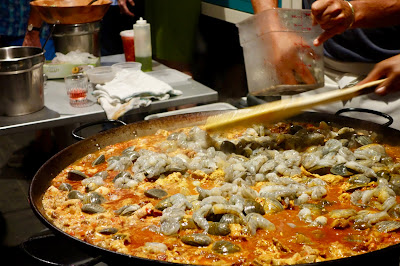 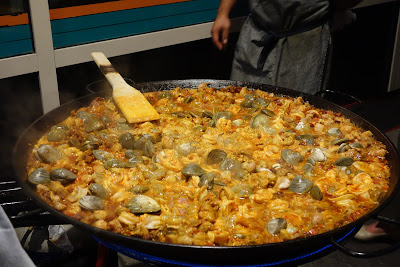 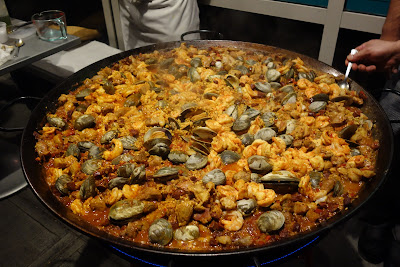 The final product, which looks somewhat different from Jaime's paella, is also beautiful and enticing. Both paellas looked like what I've previously enjoyed in Spain. 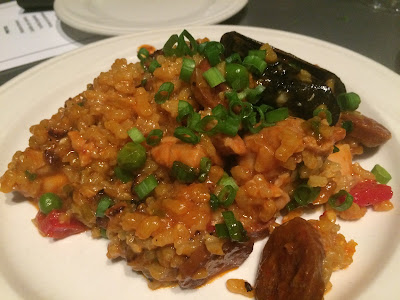 We all got a plate of each paella and this is from Jaime's pan. It possessed a great depth of flavor, a nice balance of tastes and textures. Great paella possesses socarrat, which is the caramelized and crusty rice at the bottom of the pan. Some of that crunch existed in Jaime's paella and I was sure to empty my plate. Absolutely delicious. 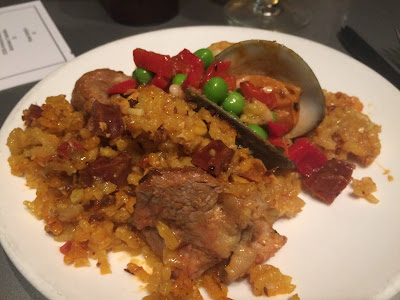 The paella from Chris had larger pieces of pork and shrimp, and a greater amount of socarrat. It too presented with an excellent depth of flavor and a nice balance. Again, this paella was absolutely delicious, and it certainly was near impossible to decide which paella was better. Though they shared some common characteristics, each also had their own unique taste. Both dishes would please any paella lover. 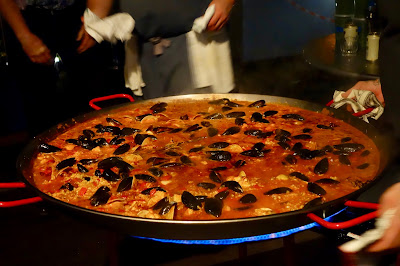 The vote was taken and it was extremely close, with about 15 people abstaining from voting. In the end, with a 39-37 victory, the winner was Chef Jamie Bissonnette! With such close results, I think it is fair to say both chefs made stellar paella and well deserve kudos for their culinary skills. Paella is such a great dish and both chefs should be very proud of their efforts. This was an absolutely fun event and they may repeat it in the future. If so, I highly recommend you attend.
Posted by Richard Auffrey at 2:30 PM