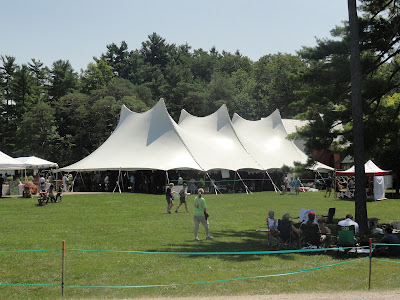 This past Sunday, I journeyed to Vermont, just south of Burlington, to attend the 4th Annual Vermont Cheesemakers’ Festival at Shelburne Farms. This was my third time attending this event, and I was invited as a member of the media. Presented by the Vermont Cheese Council, the event showcased over 40 Vermont cheesemakers, presenting more than 200 Vermont cheeses for sampling. If all that cheese doesn't excite you, then maybe you need to check your pulse. Rachel Schaal, of the Vermont Cheese Council presented an interesting statistic, "In fact, Vermont has the highest number of cheesemakers per capita." Sorry Wisconsin. The festival is held in a beautiful setting, in a Coach Barn located on a huge estate and the barn is situated next to the shore of Lake Champlain. In addition to the multitude of cheeses, there were also a number of specialty food vendors, selling items such as candy, croutons, pickled vegetables, hot sauces, and more. Plus, you could find numerous Vermont wineries, breweries and distilleries providing tastings of their products. The only criticism is that this event gets very crowded, so that you will have to wait in line for many of the samples, especially at the alcohol tables. Fortunately, the press gets into the event an hour earlier than the public, so we have the opportunity to speak with the various vendors in a more relaxed setting. 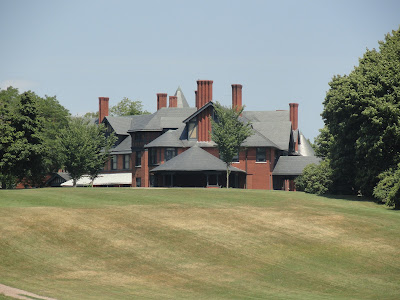 In this post, I am going to highlight some of the beverages, primarily alcoholic, which most interested me. I did not taste all of the alcohols that were available, though I have tasted many of them on prior visits. 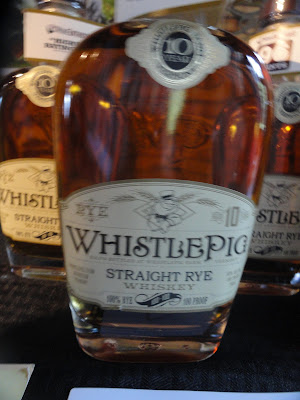 One of my best finds at the event was the WhistlePig Straight Rye Whiskey ($70), a small batch rye. By U.S. law, "rye whiskey" must be produced from a mash that is at least 51% rye, be distilled to no more than 160 proof, and aged in charred, new oak barrels. To be "straight" rye whiskey, it must also be aged for at least two years. Prior to Prohibition, rye whiskey was very popular and even George Washington produced some. But its popularity waned though we have begun to see a surge in popularity in recent years. The key to the taste of rye whiskey is its spicy component.

Whistlepig was founded in 2006 by Raj Peter Bhakta and he hired Master Distiller David Pickerell, who spent 14 years at Maker's Mark, to produce a rye whiskey. Raj purchased an old dairy farm in Shoreham, Vermont, and is currently planting rye, with an eventual goal of becoming the only single estate rye distillery in the U.S. Whistlepig is made from 100% Rye, which currently comes from Canada, and it is now aged and bottled at the farm in Shoreham. The rye is 100 proof and has been aged a minimum of 10 years, seven in new, charred oak barrels and three more in used bourbon barrels. It was initially released in 2010 and only 1000 cases were produced, though 2011 production may have doubled that figure.

The aroma of the Whistlepig is a complex melange of appealing spice notes, all which present themselves up front on the palate, including some clove, anise, nutmeg, as well as hints of vanilla and caramel. It is the lengthy finish though that is even more impressive, silky smooth with a rich and compelling taste of butterscotch, vanilla and mint. This is definitely a fine sipping whiskey, something to slow savor with good friends. It will appeal to both newcomers to rye whiskey as well as those who already enjoy such spicy spirits. Highly recommended! 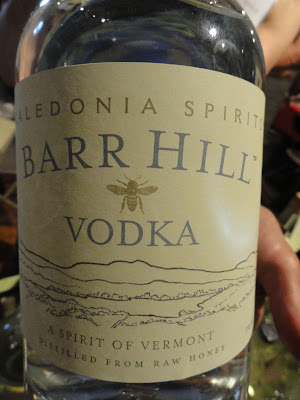 I love vodka, but I am very picky as I prefer my vodka ice cold, maybe on ice, but with nothing else added. I enjoy some vodka cocktails too, but my preference is the vodka on its own. The Barr Hill Vodka ($57), produced by Caledonia Spirits in Hardwick, Vermont, intrigued me. Caledonia is a distillery and winery founded by Todd Hardie, who has been a beekeeper since 1965. In 2006, he started working with a local wine maker to produce mead, a natural fit considering his beekeeping. Caledonia also produces Gin, Elderberry Cordial and Vodka.

The Barr Hill Vodka is produced from 100% organic, raw northern honey and is 80 proof. The honey is cold fermented for several weeks before it is distilled. They state, "The result is a pure spirit that reflects the floral characteristics of a given honey run’s blossoms." The vodka has a honey aroma, and up front, there is a mild sweetness, a nice honey with hints of floral elements, and on the finish it tastes much more like a vodka, with a bit of harshness. Personally, I would not drink this vodka on its own, but I think it would work well in a cocktail, providing some sweetness. This is an expensive vodka, in large part likely due to high production costs, so it receives a qualified recommendation. 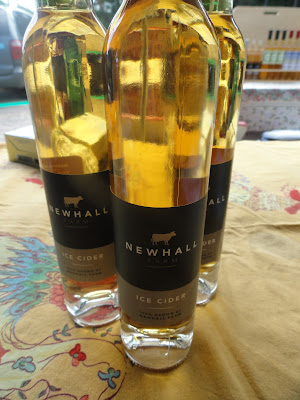 Several different apple ice ciders were offered at the festival, some of which I have tasted before. One of the new ones to me was the Newhall Farm Ice Cider ($18 for 187ml), which debuted in 2012.  Linda and Ted Fondulas are Directors of a farm in Reading, Vermont, where they also raise heritage breeds in a natural and sustainable manner. Only organic sprays are used in their orchards and their wine making style tends toward noninterventionist, though they do add yeast. This ice cider uses more traditional dessert apples, has an alcohol content of 12% and about 14% of residual sugar. This was impressive, with a mild sweetness, well balanced with acidity, and it had a rich and compelling nuanced apple flavor. This would be an excellent pairing for cheese. 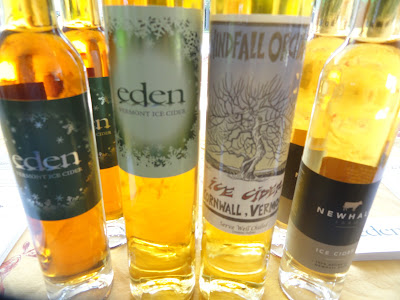 Another new beverage to me was the Windfall Orchard Ice Cider ($27 for 375ml), produced from a collaboration of Brad Koehler of Windall Orchards in Cornwall, Vermont, and Eden Ice Cider. All of the apples, about 30 different traditional and heirloom varieties, come from a small 80 tree plot. Only apples are used, and there are no colorings, sugar or flavorings added to the ice cider. It takes over 8 pounds of apples to produce one 375ml bottle, and only 100 cases were made. The ice cider has an alcohol content of 9% and about 15% of residual sugar. Compared to the Newhall, this is a little sweeter and richer, though still with good acidity, and with an intriguing and complex apple flavor, with subtle hints of tartness. 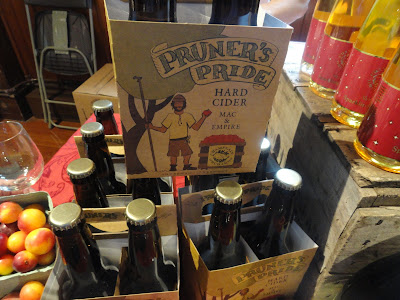 Champlain Orchards produces Pruner's Pride Hard Cider, a blend of "ecologically grown" Macintosh and Empire apples that is produced in more of an English style. I liked the taste of this dry and slightly effervescent cider, which had a subtle but pleasant apple taste, with some tartness. They also make a Semi-Dry Hard Cider and an Apple Cranberry Hard Cider. In addition, they produce a couple apple ice ciders. 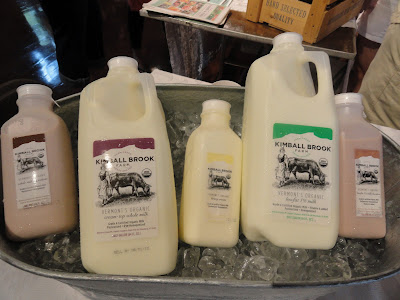 Not every beverage at the festival was alcoholic. Kimball Brook Farm, in North Ferrisburgh, Vermont, has been certified organic since 2005 and raises about 200 Jersey and Holstein cows. Their organic milks range from whole milk to 1% milk, from chocolate milk to heavy cream.  The White Whole Milk is rich and creamy, with a nice clean taste. The Chocolate Whole Milk, which you must shake before pouring as it does not contain any stabilizers, was excellent with a rich, but milder chocolate flavor. This was well balanced, rather than possessing an over powering chocolate flavor. It also was not too sweet either. The Heavy Cream is decadently lush and creamy. These all taste like milk should taste.
Posted by Richard Auffrey at 4:00 AM

Khaugalideals offers online shopping deals with a focus on Best Deals in Delhi.It’s a gateway to food menus and restaurant in Delhi.This portal provides deals as well as food deals including best deals coupons and Food Voucher.