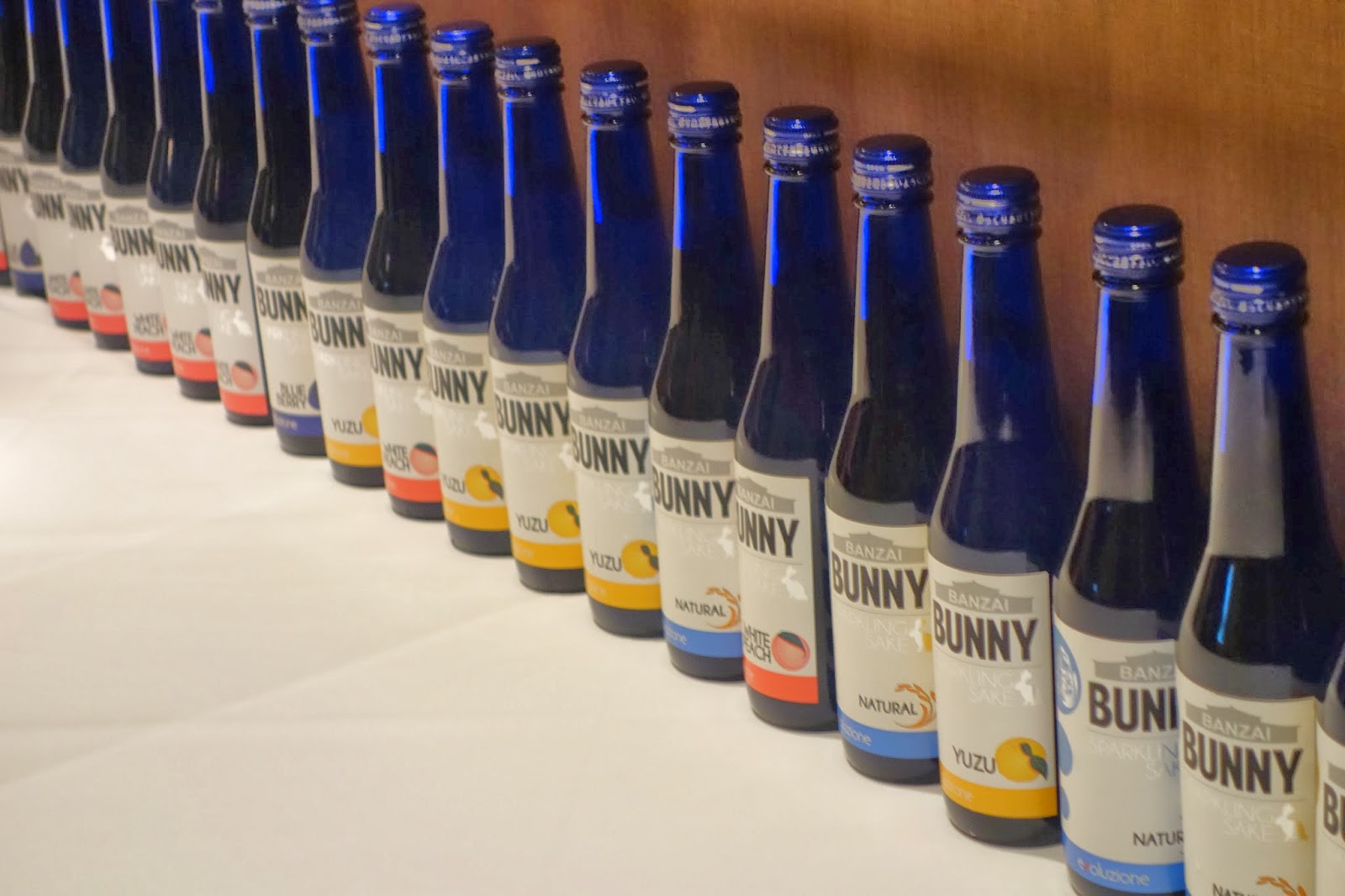 Banzai Evoluzione Sake. A Sake with an Italian name? How did that happen?

Yesterday, I wrote about my visit to Chef Ming Tsai's restaurant Blue Ginger to attend a preview event showcasing the new Simply Ming "On the Road: Japan" series. The event, An Evening Celebrating the Food and Culture of Japan, was hosted by the Ministry of Agriculture, Forestry, and Fisheries of Japan (MAFF). Seven courses of food were served during the course of the evening, and Lloyd Foster of Classic Wine Imports was present, pouring a number of Sakes for the guests.

Most of the Sake was imported by the Banzai Beverage Group, which was established in 2003 and is headquartered in Los Angeles. They import numerous types of Sake well as Shochu, and their website is currently under renovation. Recently, they have rebranded some of their prior products, their Sparkling Sakes, and also launched a new line of Sake, the Evoluzione series. Now, "evoluzione" is an Italian word, which means "evolution" or "growth" so why is it on a Japanese sake label? It seems that Banzai held a contest to name their new brand, and the winner was an Italian.

As Evoluzione is a new brand, and the Banzai website is not yet operational, there is little detailed information to be found on it. They produce at least four different types: Junmai, Junmai Ginjo, Junmai Daiginjo and Junmai Nigori. Three of those four types are produced by the Ume No Yado brewery in Nara Prefecture while the other was produced by the Matsuyama brewery in Yamagata Prefecture. Ume No Yado also produced the Bunny Sparkling Sakes, Ume Shu and Yuzu Shu we got to taste.

The Ume No Yado brewery was founded in 1893 and is located at the foot of Mount Katsuragi in Nara, often said to be the birthplace of Sake. The phrase "ume no yado" means "plum house" and refers to an ancient plum tree located on the grounds of the brewery which has been there for as long as anyone can remember. Their motto is “small volume, yet high quality” and though they tend to use many traditional brewing practices, their marketing seems more modern and innovative. Since 2002, they have been exporting their Sake, and seem to be trying to market to a U.S. audience, making their Sake labels more approachable, as well as embracing the idea of Sake cocktails. As the U.S. Sake market continues to grow, it would benefit many Sake breweries if they marketed more to the U.S. 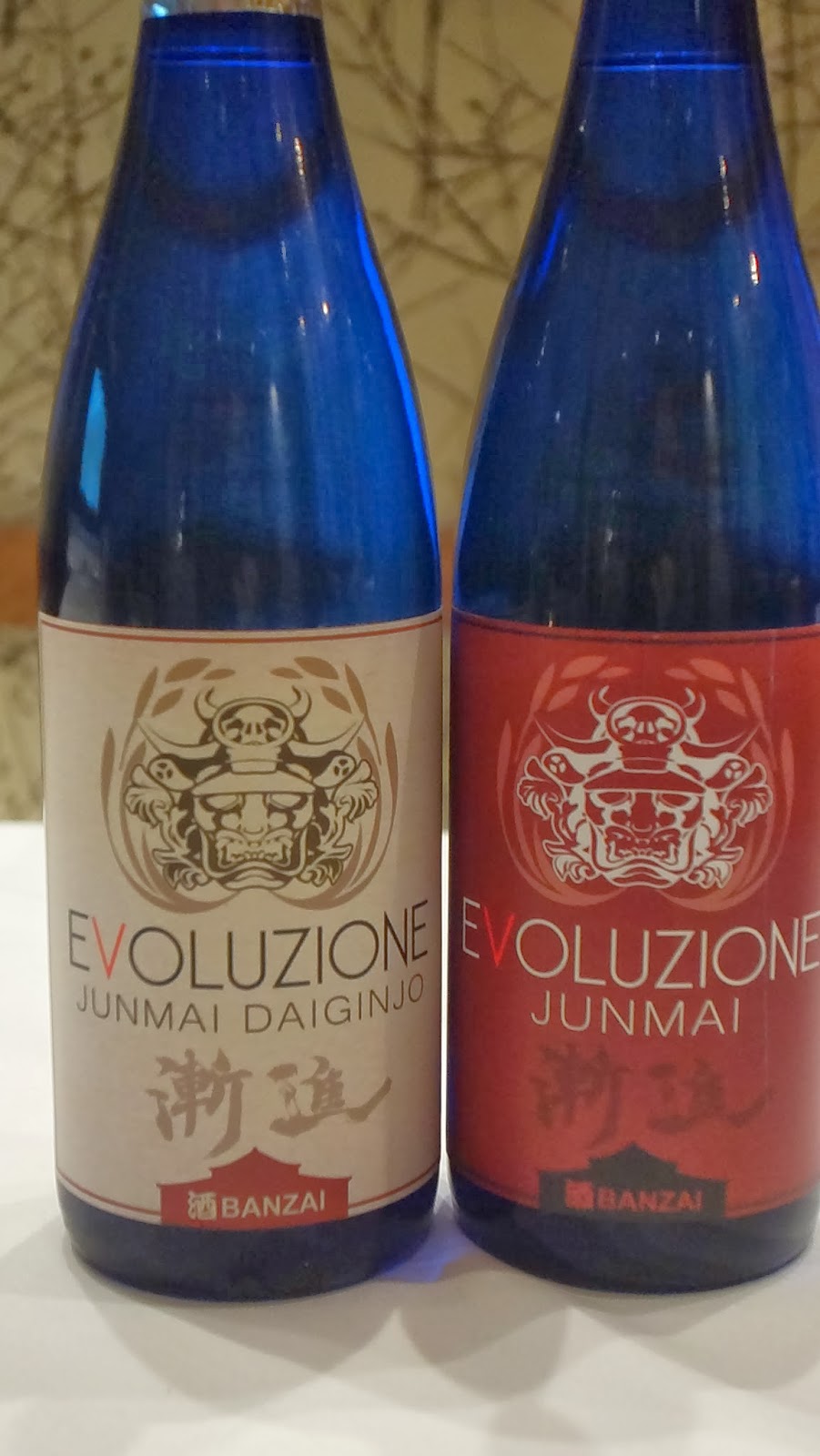 The four Evoluzione Sakes all come in blue bottles, which likely is done to protect the Sake from sunlight, which can negatively impact the taste if it is subjected to too much sun. Different colored labels are used for each Sake type, and each label also has a stylized and slightly scary Oni mask, including a skull, horns and fangs. An oni is a supernatural creature from Japanese folklore, sometimes called a demon or ogre. Though they are often malicious, there are some benevolent oni in Japanese folklore, though the oni depicted on this label doesn't look too kind. 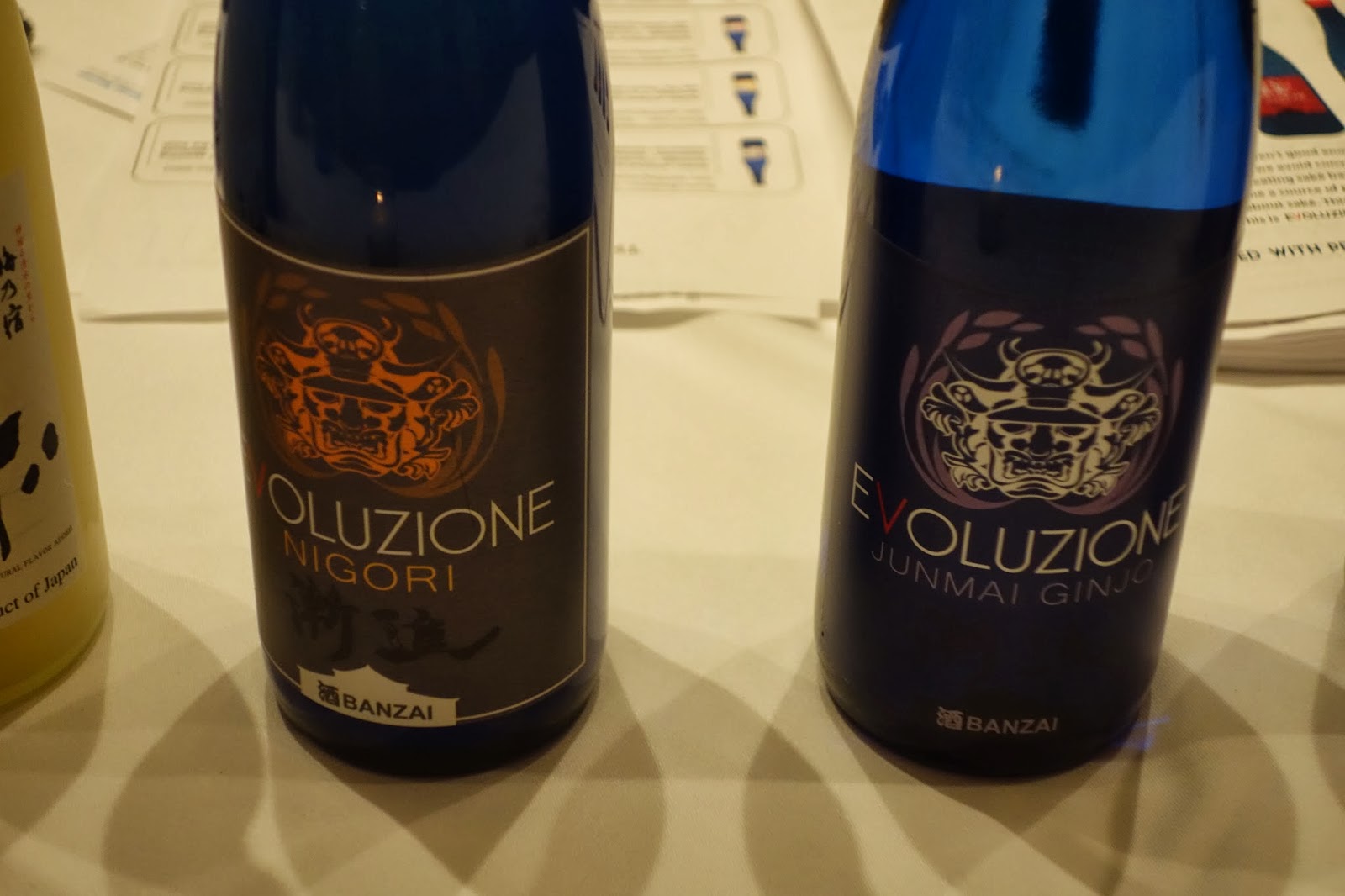 Please note that the prices are very rough estimates. 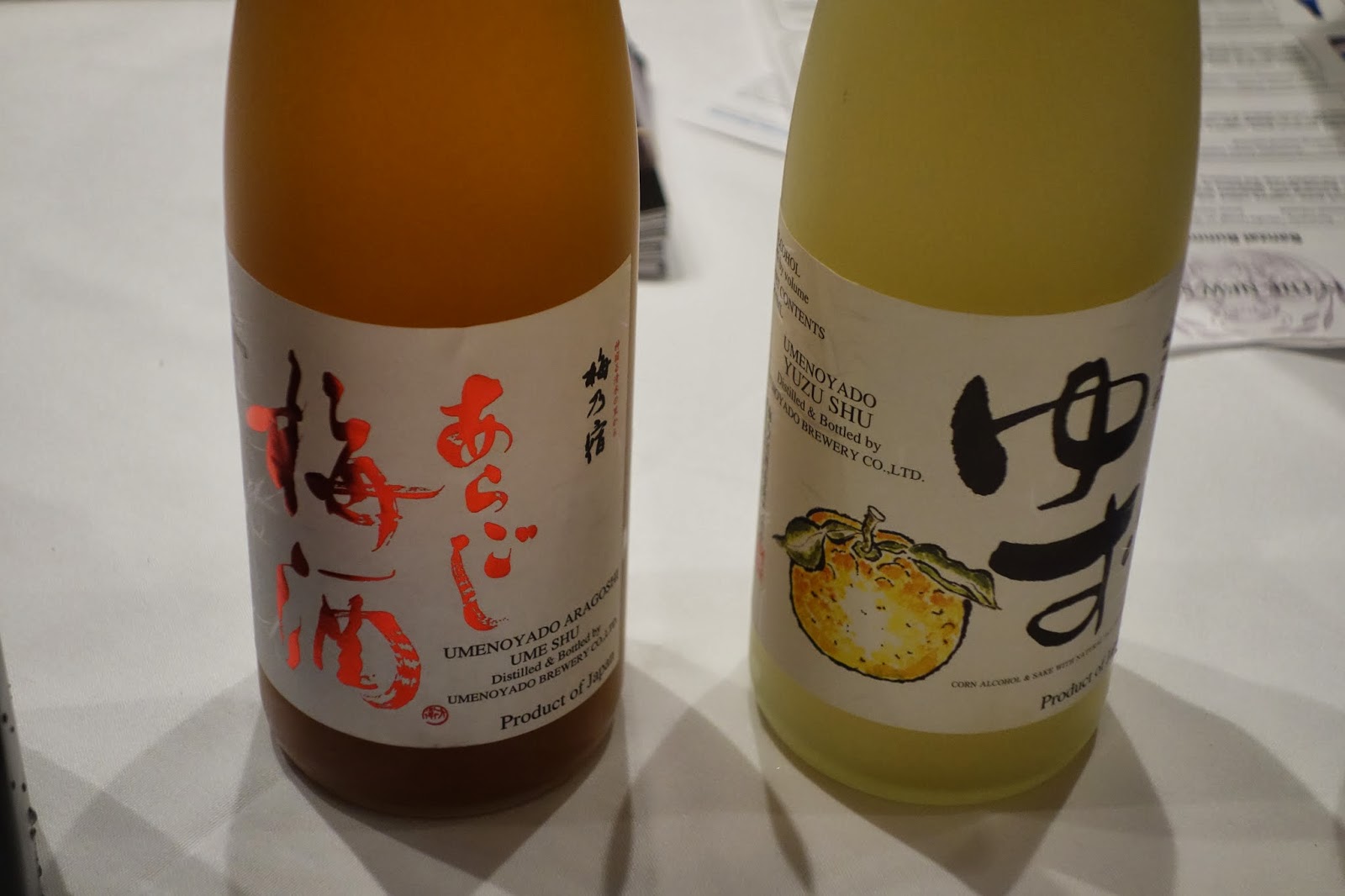 Ume No Yado also produces an Aragoshi line, Sake-based liqueurs, including Ume Shu and Yuzu Shu. Each contains Sake, 21% of fruit by volume, and a tiny bit of Shochu for depth and aroma. The Ume Yuzu possesses a bright citrus flavor, a bit of tartness and a mild sweetness. Very pleasant and would make an excellent cocktail addition. The Ume Shu is sweeter, with a prominent ripe plum flavor, and it too could be used in a cocktail. Though useful in a cocktail, I am sure plenty of people could drink these on their own too. The Banzai Bunny Sparkling Sakes are produced by Ume No Yado and were rebranded from their former names such as Moon Rabbit and Star Rabbit. They come in four flavors: Natural, Blueberry, White Peach & Yuzu. In general, each is fruity, lightly effervescent and mildly sweet. I have previously reviewed them under their original names, and they make a nice introduction to Sake for a newcomer. I have poured Sparkling Sakes at numerous tasting, and they are a big hit, especially with women. They might not taste much like Sake, but they can show people the diversity and versatility of Sake. 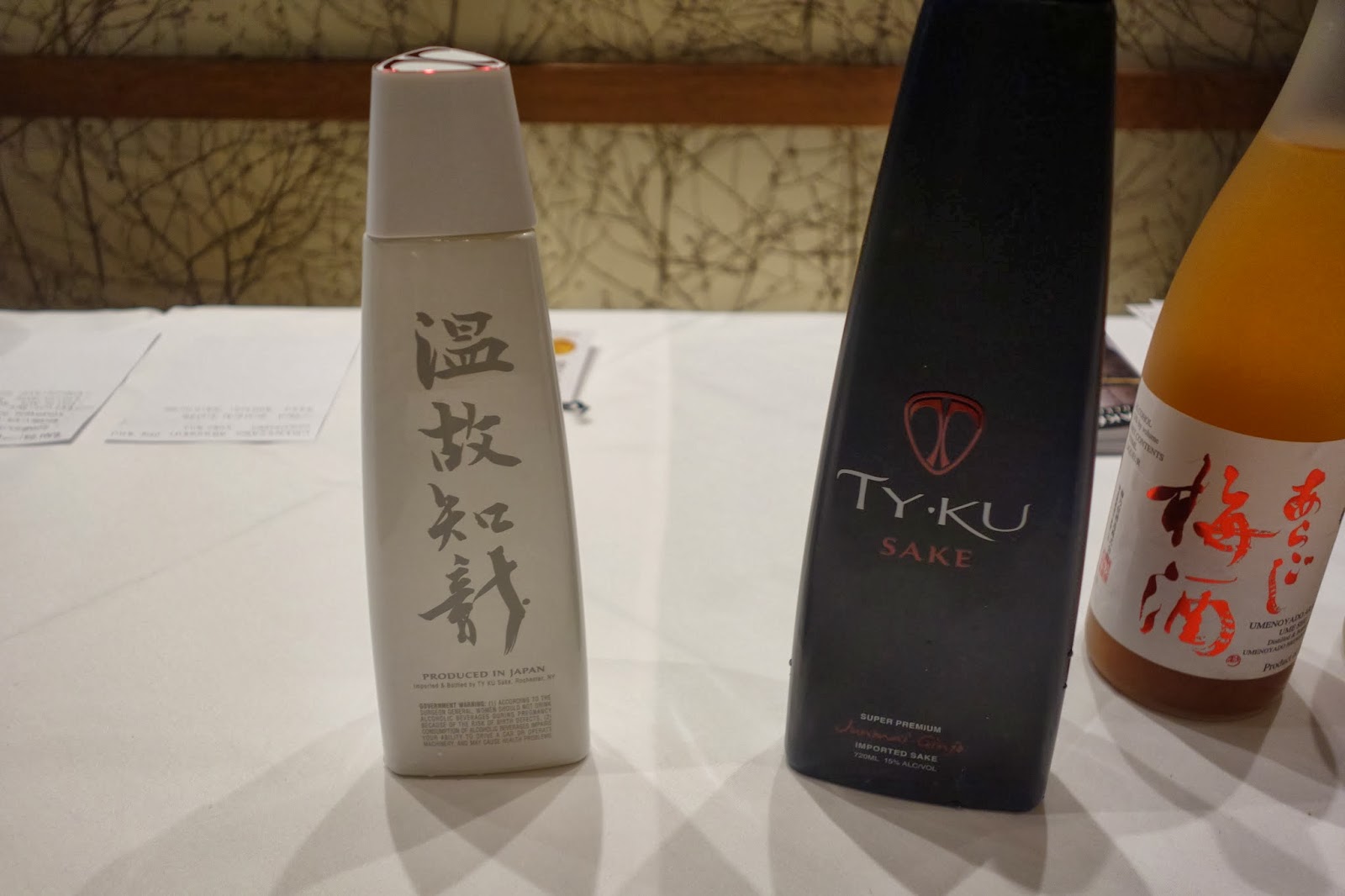 The evening also included two Tyku Sakes: their Black, a Junmai Ginjo, and White, a Junmai Daiginjo. The Black is produced by Ume No Yado and the White is made by the Matsuyama Shuzo.
Posted by Richard Auffrey at 3:00 AM

You turned me on to Moon Rabbit almost two years ago! What a great brand name, right?

PS: Ume No Yado once employed Phillip Harper as a kurabito!