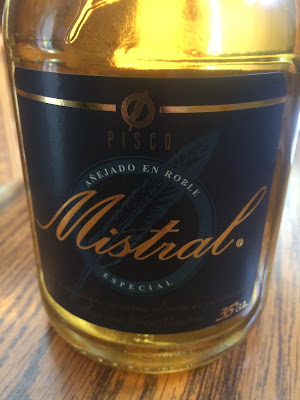 You should explore the native spirits of other countries, even though it might be a bit more difficult to find them locally. I recently mentioned Sotol, an intriguing Mexican spirit,  and now I'm going much further south, to Chile, to highlight the compelling Pisco.

Four years ago, while touring through Chile, our van stopped at an isolated gas station in the countryside for a fill-up. There was a small grocery store attached to the station so I got out of the van to check it out, maybe to pick up a snack. However, I was amazed to find that the back of the store was taken up with several shelves of different bottles of Pisco, a well-known spirit in Chile and Peru. I bought a bottle, the Pisco Mistral pictured above, and when I brought it back to the van I told everyone else what I had found. Most of them then left the van to get some Pisco too. That gas station did a great business in Pisco that afternoon.

For some background and basic information on Pisco, including its history, check out my previous post, La Mar, Pisco Sours & A Cautionary Tale, and my prior review of the Macchu Pisco La Diablada, a Peruvian Pisco. Pisco still remains relatively uncommon in the U.S. but it is a growing category and you should keep an eye out for it at your local bars and liquor stores.

Pisco Mistral is owned by the Compañía de Cervecerías Unidas (CCU), the largest brewer in Chile and a producer of both alcoholic and non-alcoholic beverages. The Pisco distillery is located in the town of Pisco Elqui, in the Elqui Valley, where Pisco production was first conducted in Chile. The town was originally known as :La Greda but was changed in 1936 to help support Chile's legal claim to produce Pisco. The brand name, Mistral, is derived from the name of Gabriela Mistral, who was a native of Elqui Valley and was the first Latin-American woman to win the Nobel Prize for Literature.

The distillery produces several different Piscos and I opened the Pisco Mistral 35, which is produced primarily from Pedro Ximénez and Muscat of Alexandria.grapes and aged in American oak. It has a light golden-brown color and appealing spicy aromatics. On the palate, it is soft and smooth, with pleasing flavors of vanilla, spice and mild herbal notes. It has a lengthy and satisfying finish, without any bite. You'll realize that it is a versatile spirit, one which would work well in a wide variety of cocktails. The Pisco Sour might be the most famous and common Pisco cocktail, but you can do so much more with this delightful spirit. 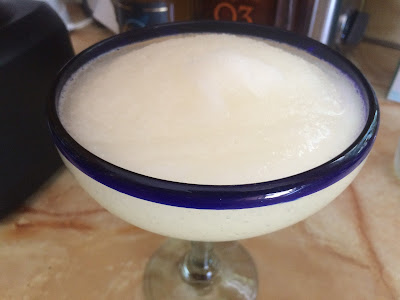 I've been having fun with my new blender so decided to put the Pisco through the paces. I decided to create a Frozen Piscorita, a Margarita that substitutes Pisco for the Tequila. I figured the flavors were similar to what you would find in a Pisco Sour so it should work well. For the Margarita mix, I used the Squeeze from the Margaritas restaurant, which was especially appropriate as it contains egg white, which is also an important ingredient in a Pisco Sour. I used the same amount of Pisco as I would have used Tequila.

The Frozen Piscorita was a big hit! It lacked the bite of tequila and there was the addition of some spicy notes as the Pisco was barrel aged. The flavors of the ingredients blended very well and the cocktail went down very easily. It would appeal to many people, including those who dislike tequila. It would be a nice introduction to Pisco and should stir the imagination as to how Pisco could be used in many other cocktails. I also made a non-frozen version and, as expected, it too worked well. Seek out some Pisco and learn more about this fascinating South American spirit.

Do you have a favorite Pisco cocktail?
Posted by Richard Auffrey at 3:00 AM