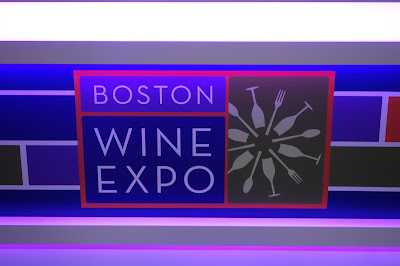 A fascinating Spanish wine that was a blend of Sauvignon Blanc and old vine Palomino. An intriguing Georgian Rkatsiteli wine fermented in a traditional qvevri. A Sparkling Ribolla Gialla wine from Slovenia. Killer value Portuguese wines under $10. And I found even more delicious and interesting wines at this past weekend's Boston Wine Expo.

The 25th Anniversary of the Boston Wine Expo was held on February 13 & 14 at the Seaport Hotel & World Trade Center. Presented by the Boston Guild of Oenophilists, the Expo gathered together thousands of wine lovers, producers, importers, distributors and others. As a media guest, I attended both days of the Expo, seeking out new wines, enhancing my wine education, and hanging with friends. Overall, it was a fruitful weekend as I discovered plenty of interesting wines and had lots of fun.

I spent most of my time in the Grand Tasting, which featured over 200 producers and about 1800 wines, though I also checked out the Vintners' Reserve Lounge. At the Expo, I got to see some wine loving friends, including Doug, Todd, Chanie, Brett, and William, and told them about some of my favorite wines. Though I enjoy discovering new wines, I also get much enjoyment from sharing those discoveries with others. And it is even better when your friends also find joy in the wines you recommended. In the next couple weeks, I'll be sharing those finds with my readers too. 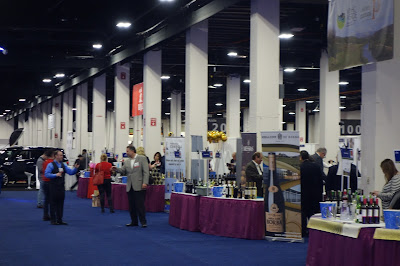 Once again, the Grand Tasting offered some intriguing diversity in some respects, but failed in certain areas. On the positive side, you could find wines from lesser known wine countries including Moldava, Lebanon, Israel, Georgia, Romania, Slovenia, and Uruguay. California, France, Italy, Spain, and Portugal were well represented. However, some countries and regions had very limited or no representation, including South Africa and Alsace. There were only two Sake producers represented and I would have liked to see more representation, especially from some of the smaller Sake breweries. I also would have liked to see more Spanish Sherry, Ports from Portugal, and Italian Franciacorta.

I understand some of the reasons for the lack of diversity in some areas. It isn't cheap to have a table at the Expo and not all producers, especially the smaller ones, believe they receive a sufficient economic benefit for the cost. Maybe the Expo organizers could try to address this matter by providing reduced pricing for small wineries, maybe based on production levels. In addition, maybe Expo organizers could also be more proactive in trying to bring more exhibitor diversity to the event by actively seeking out producers in regions which have been under-represented in the past. 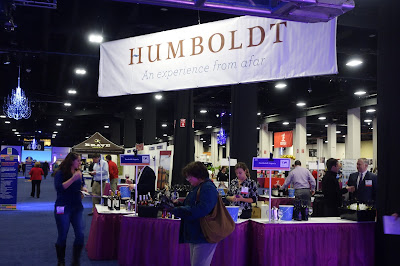 During the trade hours, from 11am-1pm, I got plenty of work done, tasting a variety of wines, learning about those wines from the producers, distributors and importers, and taking notes. It is a quiet time then, with fewer people around, so you have a greater opportunity to taste and chat. When the Public hours began, at 1pm, it is tougher, especially on Saturday, when the crowds fill the great hall. You often have to wait in line to reach a specific table, and the producers, distributors and importers have less time to speak with each person who comes to their table.

This is probably the main complaint about the Expo, is that it gets too crowded, and that complaint has some validity. Of the two days, Saturday was definitely the more crowded of the two, which is usually the way it is each year. They have tried to separate the tables more, to create larger aisles, to alleviate some of the crowding. In some respects, that has helped, but certain spots still get too crowded so that it is tough to even make your way down the aisle. This is an issue at all major wine event where thousands of people attend.

Besides all the wine available at the Expo, there are a number of food exhibitors, many offering free samples of their products. As I've often repeated, at such a large wine event it's beneficial to have plenty of food samples to help absorb the alcohol and cleanse the palate. I have also recommended before that attendees should try to pair some of these food samples with the wines they taste. For example, I paired some chocolate with a Licor de Tannat, an Uruguayan wine similar to a Port. Did you try any food and wine pairings at the Expo?

I'm going to highlight some of the favorite food and non-wine finds from the Expo, and would like to hear about your own favorites too. 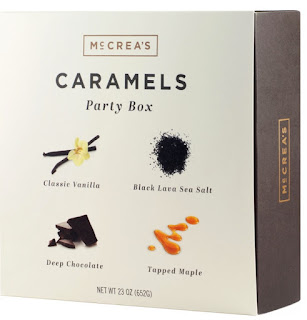 McCrea's Candies makes a variety of delicious caramels and I've been enjoying their caramels since 2012. They are a local company and have been regularly exhibiting at the Expo. This year, they were involved in my favorite food & wine pairing of the Expo. I enjoyed their Black Lava Sea Salt Caramel with the Bodegas Hidalgo-La Gitana Alameda Cream Sherry.  The sweet and salty caramel went well with the complex flavors of the Sherry, including its nutty, briny and caramel notes. A magical combination. 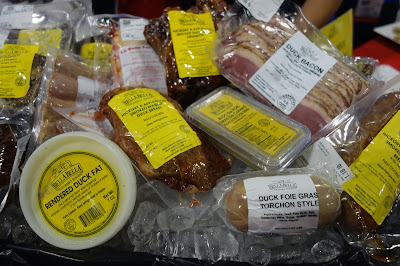 Bella Bella Gourmet Foods, located in Connecticut, represent a group of farms in Sullivan County, New York which raise heirloom poultry, game birds and other meats such as rabbit. They also produce foie gras and foie-related products. At the Expo, they were sampling a number of duck products, from duck bacon to duck prosciutto, and including a duck quesadilla. It was all delicious and near-addictive. They are high quality products, with plenty of flavor, and worth checking out. 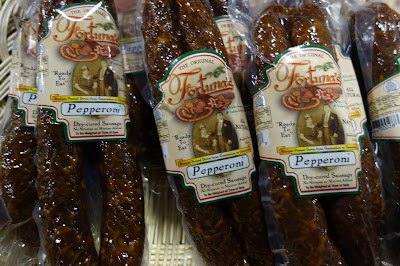 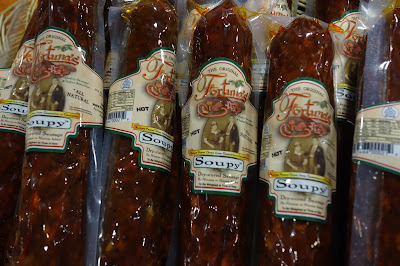 Fortuna's Sausage Co. has been producing sausage and other meats for over 100 years. The current third-generation owner is Patti Fortuna-Standard, whose grandparents came to the U.S. from Calabria, Italy. They brought their recipes with them, and they still form the basis of the company. Their products are only available online and at some trade shows. They sell a variety of salumi, all natural and nitrate free, from Pepperoni to Salami, many priced about $16-$20 for a 9-10 ounce stick.

At the Expo, they offered samples of maybe seven or eight of their products and all of them were tasty, with a nice blend of spices and meat. The Pepperoni were excellent as was the Soupy, which is also known as Supri, Suppi, and Calabrese salami. They have five varieties of Soupy, including Sweet, Mild, Hot, Extra Hot and Nuclear Hot. The Hot Soupy, with a meaty, savory taste, also had a spicy kick on the finish, a slow growing burn in your mouth. I tried the Nuclear Hot as well, and it certainly left a fiery burn in your mouth, deserving of its label, but again it was something that slowly built over time in your mouth until it became an inferno. I know some people who will love it! 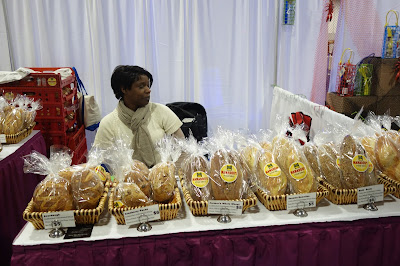 Mamadou's Artisan Bakery, located at 63 Swanton Street in Winchester, is one of my favorite bread bakeries. They were selling some of their delicious breads at the Expo and I picked up a baguette. It was good to walk around the tasting, being able to snack on some crusty bread in between sips. If you haven't stopped by their bakery, I highly recommend you do so. 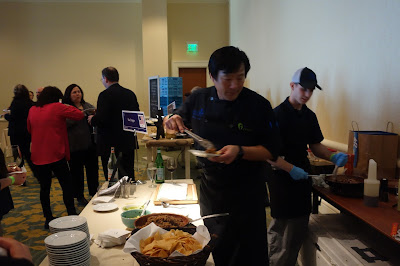 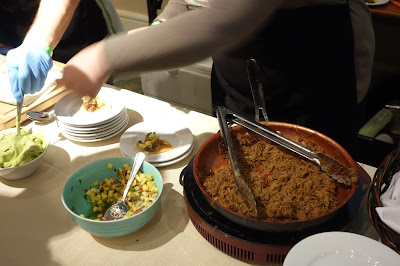 In the Vintner's Reserve Lounge, Chef Ming Tsai offered one of the best dishes of the Expo, Red Roast Duck Tostadas with a spicy pineapple salsa and avocado puree (though I had mine without the avocado). The duck was tender and flavorful, with a nice blend of spices, and the salsa added a mildly spicy kick. The tortilla chip made a nice vehicle for the duck and I enjoyed several of these tostadas as I sampled several wines. It went especially well with both a Provence Rosé and a Spanish Mencia. 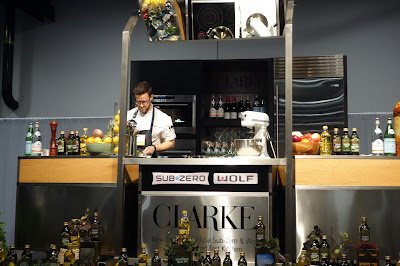 Chef Brendan Pelley, formerly of Zebra's Bistro, has launched a new project, a Greek inspired pop-up called Pellekasis. It is located in Wink & Nod and will be around for maybe another six months or so. Chef Pelley is hoping that it might lead to a future brick and mortar restaurant. I like that Chef Pelley is presenting Greek cuisine, but with some new techniques and ingredients, bringing a fresh approach. At the Expo, Chef Pelley conducted a Chef Demo, creating Wild Boar Keftedes, meatballs, his own spin on a Greek classic. He adds a bit of an Asian flair, using soy sauce and panko in his recipe. The meatballs  were moist and flavorful, and I love that he used wild boar. I need to check out Pellekasis soon. 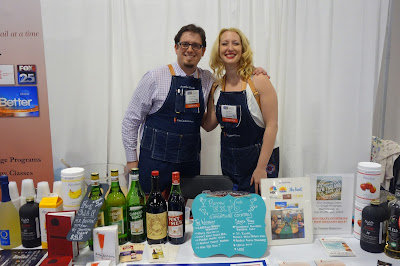 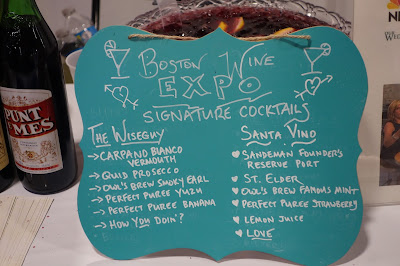 Jonathan Potash, the Cocktail Guru, is pictured above with Kirsten "Kitty" Amann, both very well known in the Boston cocktail scene. They presented two different wine cocktails, The Wiseguy and the Santa Vino.  Both were intriguing cocktails, well balanced and tasty, though my favorite was The Wiseguy as I liked its smoky edge accompanying the yuzu and banana flavors. These cocktails were a nice addition to the Expo.

During the next couple weeks, I'll be posting reviews of the wines I most enjoyed at the Expo. Stay tuned..

Posted by Richard Auffrey at 9:26 AM