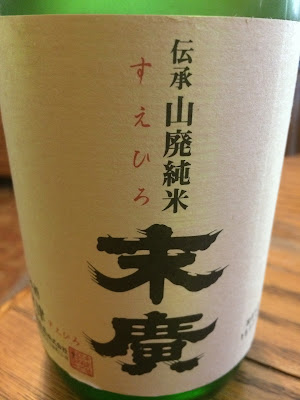 I often love the Kimoto/Yamahai styles of Sake, which can taste earthy with lots of umami and higher acidity. Because of their high level of acidity and umami, they can pair well with many different foods. Kimoto was the original method of production, basically where large oar-like poles, referred to as yamaoroshi, were used to stir the moto, the yeast starter. For hundreds of years, this process was conducted in Sake breweries all across Japan. It wasn't until the beginning of the 20th century, did someone realize that this laborious process was completely unnecessary.

In 1909, Professor Kinichiro Kagi, at the National Institute for Brewing Studies, realized that the use of the oar-like poles to mix the moto wasn’t necessary. The moto could be left on its own to complete the process, although a couple adjustments were required, including adding some more water and raising the temperature a bit. Yamahai is short hand for "yamaoroshi haishi moto," which roughly translates as "creating the moto without the use of oar-like poles."

To hone this new method, Professor Kagi conducted some experiments at the Suehiro Sake Brewery, located in Aizu, Fukushima Prefecture. Once Professor Kagi left the brewery, the next Toji working at Suehiro decided not to use the Yamahai process. Eventually though, the brewery would revive this method, using it for many of their premium Sakes.

As an aside, a few years after the discovery of the Yamahai process, brewers realized there was an even easier method. If they added lactic acid to the moto, they could cut the required time in half and it was also a much less risky method. This became known as the Sokujo method and is now the most commonly used method, though some breweries still make at least some of their Sake with either the Kimoto or Yamahai methods.


The Suehiro Brewery was founded, in 1850, by Inosuke, from the Shinjo family, which was a Sake supplier for the Lord of Aizu, Hoshina Masayuki. Inosuke eventually went out on his own, founding Suehiro, and it has been a family business for eight generations, becoming one of the largest Sake producers in the Tohoku Region.

The Suehiro Densho Yamahai Junmai ($26.99/720ml) is produced from Gohyakumangoku rice, which has been polished down to 60% (which technically would make it a Ginjo). It has a Sake Meter Value of +1, so it is basically neutral with a 15.5% ABV. This seems to be a very typical Yamahai Sake, with delicious earthy notes, high acidity and plenty of umami. It is easy drinking, smooth, and complex with a hint of citrus, smoke, and sweetness. Simply a delicious Sake, which will pair well with many different foods, from mushroom risotto to a grilled steak. It went well with our dinner of a stir-fry shrimp and noodle dish. Highly recommended!
Posted by Richard Auffrey at 10:23 AM