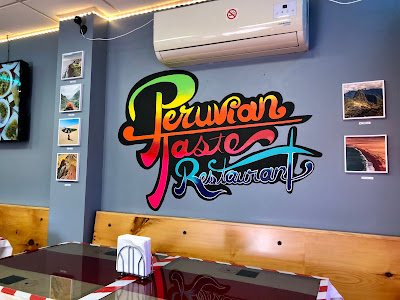 Where can you go in the Boston area to taste a variety of Chifa dishes, that scrumptious fusion of Peruvian and Chinese cuisine?
During the last couple weeks, I've been thoroughly impressed by the Peruvian Taste Restaurant, a new Peruvian restaurant located at 78 Arlington Avenue, Charlestown. The restaurant opened in September 2020, in the midst of the pandemic, which was certainly a courageous act. It's located in an industrial/commercial area so it's not a place that many people might commonly drive by. You need to know about it, to seek it out, and it's more than worthy of your attention. 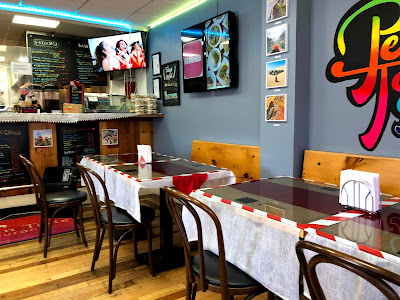 The restaurant is open seven days a week, generally 8am-8pm, and serves breakfast, lunch and dinner. It's a small, intimate spot, that seats about twenty people, and its busiest times are generally Friday through Sunday. I've dined there for lunch four times, with plans to return again very soon, drawn by the quality and flavor of their food. Plus, I've enjoyed exploring their numerous Chifa dishes.
For breakfast, there's plenty of typical American items, like eggs, omelettes, and waffles, as well as a few Peruvian dishes, including Tamales, Pan con Chicharron, Peruvian Style Chicken Sandwich, and Belgium Waffles (with fruit and lucuma ice cream). For lunch, there are a small number of more American dishes as well, including Burgers, BLT, and Fish Tacos. However, your best option would be to select from their Peruvian and Chifa dishes. You can go anywhere to a burger or fish taco, so be adventurous and explore the more unique Peruvian and Chifa items on their menu. 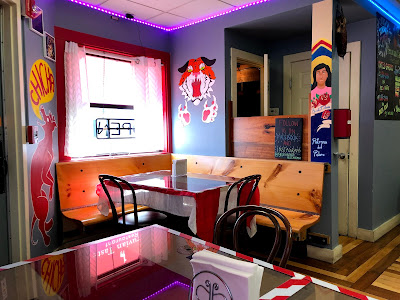 The menu has plenty of options, and you might have difficulty deciding which dishes to order, which just means you will need to dine there multiple times to sample all the dishes that entice you. The menu has Appetizers (about 9 choices from $2-$17.99), such as Guacamole con Yuca Frita and Ceviche de Pescado; and Lunch & Dinner Entrees (from $8-$18), such as Lomo Saltado (Filet Mignon , onions, tomatoes, sautéed in a special sauce rice and fries), several different versions of Chaufa (fried rice), Ceviche de Pescado, Aji de Gallina (Shredded chicken cooked in a flavorful cream sauce with milk cheese aji and pecans) and Jalea Peruana (Deep fried seafood).

They also have a list of New Dishes (from $10-$15.99); like Rachi (grilled cow tripe), Peruvian Street Sandwiches, and Trio de Causa (Ceviche, chicharron de pescado, octopus with shrimp). In addition, there are Weekend Only Specials such as the Trio Marino + Chicha Morada ($20), which includes Arroz chaufa de mariscos, ceviche, y chicharrón de pescado, and the Combo de Mar Bravazo ($60). which includes Jalea, Arroz con mariscos, ceviche de pescado, causa rellena de camarones con baby octopus, plátanos fritos, yuca, y camote.
On the weekends, they sometimes have other specials. For example, they have previously offered Picante de Cuy, guinea pig.
The only caveat is that a portion of the menu, especially the Appetizers and Desserts, is only written in Spanish, so you might need use Google to determine the nature of those dishes. The Entrees and Chifa dishes generally have English translations. 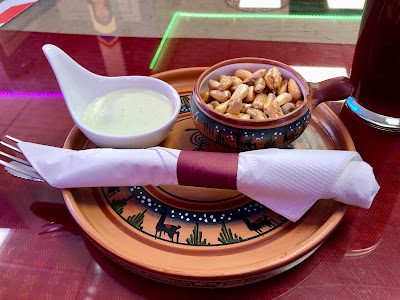 On one of my visits, I received a complimentary dish of Cancha, the Peruvian version of "corn nuts," with a salsa verde. This dish uses large-kerneled corn, called maíz chulpe or maíz cancha chulpe, which are tossed with oil and toasted in a hot skillet. Once done, a little salt is sprinkled atop them. I like these salty, crunchy pieces of corn. A great bar snack. 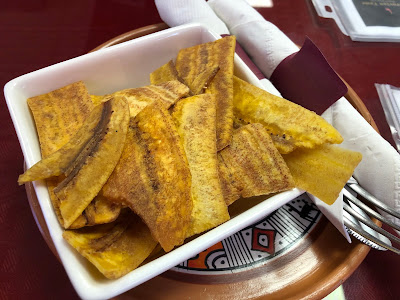 On three of my other visits, I received a small bowl of fried Plantain Strips, another tasty treat with a nice crunch and slightly sweet flavor. 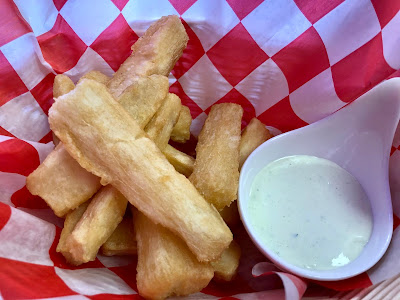 From the Appetizers, the Yuca Frita ($2), are basically French fries made from Yucca, which means they tend to be a bit more starchy, and if not done well can be tough. However, these were fried just right, with a nice crisp to the outside, and a fluffier interior, though still with more substance than a potato. They came with a salsa verde for dipping. This dish is indicative of the culinary abilities within their kitchen, how they skillfully execute even the simplest of dishes. 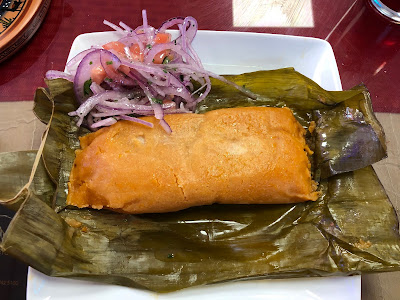 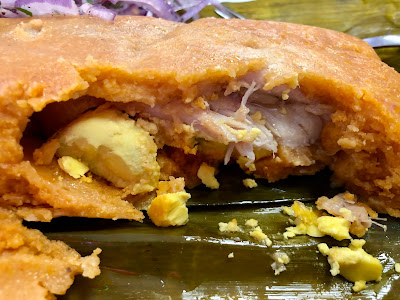 The Tamal Criollo ($7.50) is a Peruvian version of the Tamale, and comes with either chicken or pork. I opted for the pork, and the tamale contained a large piece of tasty and tender pork, as well as an egg, olive, and hot pepper. The corn "shell" was soft and sweet, and the whole dish worked well. 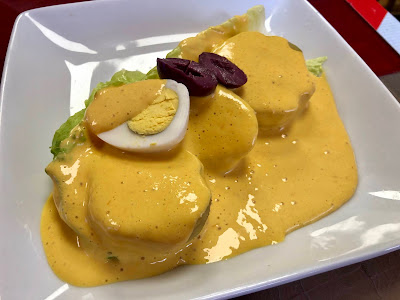 The Papa a la Huancaina ($7) .00 is a Peruvian dish of boiled yellow potatoes in a spicy, creamy sauce called huancaína sauce. The potatoes were soft, with a nice firmness to them, and the sauce was excellent, with a touch of spicy heat and a delightful creamy texture, complementing the potato and egg. 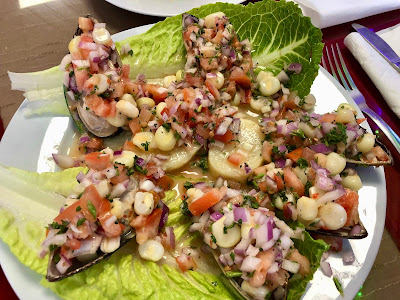 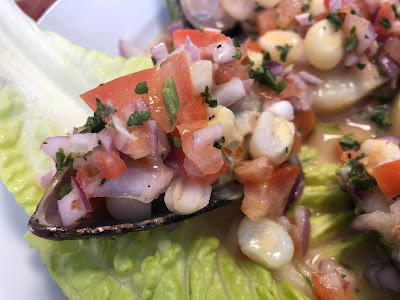 The Choros a la Chacala ($12) is a Peruvian mussel dish, topped with corn, tomatoes, onions, and herbs. Like Ceviche, the mussels seem to "cook" a bit from the toppings, and this is a fresh and delicious dish, perfect for summer. 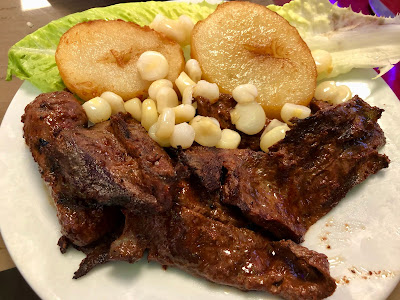 From the New Dishes, the Anticuchos ($10.99) is a famous Peruvian dish, traditionally made from beef hearts, that are marinated in Peruvian aji panca and served with golden potatoes and corn. The meat was cooked just right, leaving it tender but with that firmness you get from beef heart, and the seasoning added a delightful edge to the dish. The golden potatoes were scrumptious, with a great crisp exterior, and a softer, fluffier interior. Those potatoes couldn't have been cooked any better, once again showing how the kitchen elevates even some of the simplest foods. 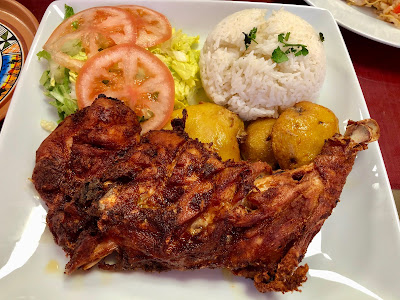 Another of the New Dishes is the Pollada ($12), traditional fried chicken with boiled potatoes, rice and a side salad. First, the potatoes are similar to the golden potatoes in the Anticuchos dish, and are just as enticing. Second, the hearty piece of fried chicken was absolutely fantastic. The crisp coating wasn't too thick, was spiced just right, and had a compelling taste, complementing the tender, moist chicken within. I was enthralled with this dish and highly recommend it. 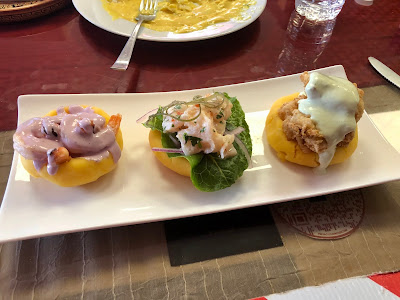 Also on the New Dishes, is the Trio de Causa ($15), made with Ceviche, Chicharron de Pescado, and Octopus with Shrimp. A Causa is basically a potato "dumpling" with some type of topping, which can vary greatly. 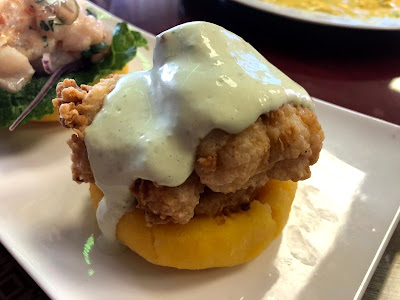 The Chicharron de Pescado was delicious, and the fried fish had a light, clean fried coating and plenty of moist, flaky fish inside. It made me want to order their fried fish entree, which I'll have to do on a future visit. 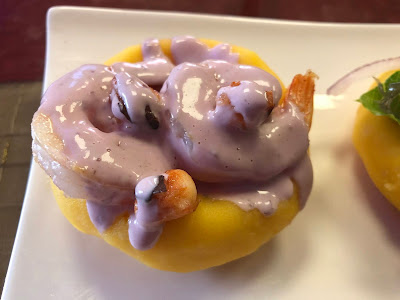 The Octopus with Shrimp was also good, with an intriguing sauce, in both color and taste. 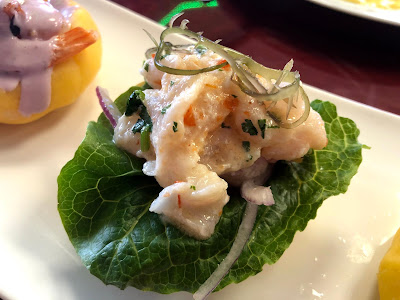 The Ceviche was a hit as well, with a creamy and bright aspect to the seafood. I haven't had their other Ceviche dishes yet, but this sample entices me. 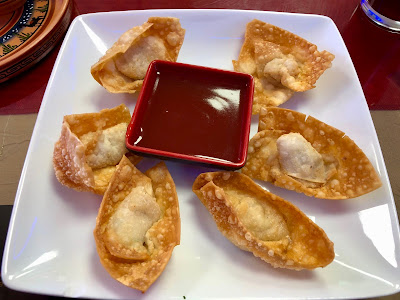 From the Chifa menu, the Wantan Frito ($5) are deep fried wontons filled with chicken and served with duck sauce. Great, crunchy wontons with a tasty chicken taste and the duck sauce was not your usual, but was nicely sweet without being cloying. 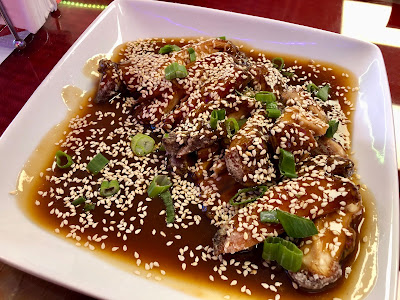 Another superb dish was the Pollo Chi Jau Kay ($12), boneless chicken morsels battered, fried and topped with sesame seeds and scallions. This might seem similar to Sesame Chicken dishes you can find at many Chinese restaurants, but this dish was elevated above its competitors. The chicken isn't surrounded in thick batter, but rather just the exterior of the chicken was fried, giving a great crispy aspect to the chicken. It's as if they fried the exterior of the chicken and then tore pieces of meat off the bird. The sauce was more savory than sweet, and quite compelling, and much thinner than what you find on other Sesame Chicken dishes. Another highly recommended dish. 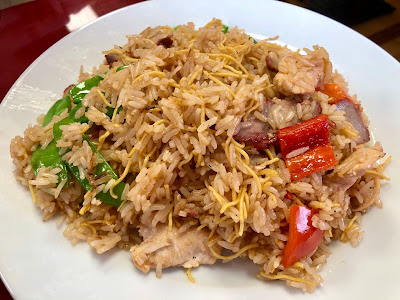 The culinary hits continued! The Aeropuerto ($16) was a melange of fried rice, chicken, Char Siu pork, Lo Mein noodles, peppers, snow peas and scallions. And all of these ingredients worked well together, creating a delicious and intriguing dish. The Char Siu was especially tasty, and were very thin sliced pieces of barbecued pork. They have also recently introduced an Aeropuerto Especial, which adds shrimp and Chinese sausage to this dish. Highly recommended. 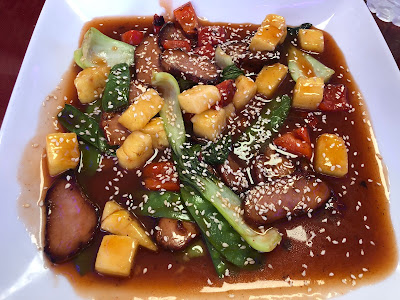 The Chancho con Piña ($16) had slices of Char Siu pork, stir fried with snow peas and pineapples, and topped by a tamarind sauce topped with sesame seeds. Once again, the sauce was thinner than similar dishes, and was sweet, though not overly so. There was a nice tropical flair to this dish, all which complemented the thin slices of pork. 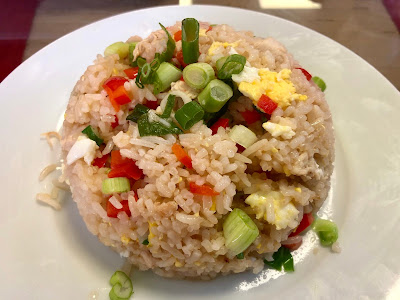 This is a simple dish of Chaufa Pequeno ($8), a small Chinese fried rice with chicken. Tasty and fresh, it makes me question why Chifa cuisine isn't more available in the U.S. 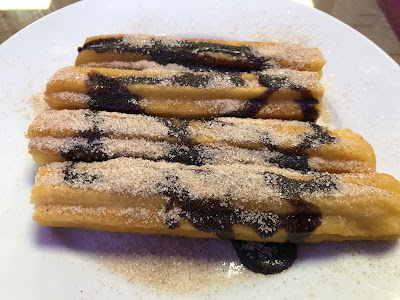 A variety of Desserts are available as well, such as Passion Fruit Ice Cream, Lucuma Ice Cream, Alfajores (cookies filled with dulce de leche), Leche Asada (crème brulee) and Mazamorra y arroz con Leche (Purple and rice pudding).
The Churros ($2.50) are covered in cinnamon and sugar, drizzled with chocolate, and filled with Belvedere cream. Hot, crunchy, sweet and creamy, such a nice blend of textures and flavors. I've had these twice because they were so good. 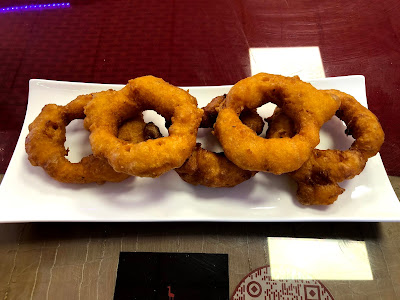 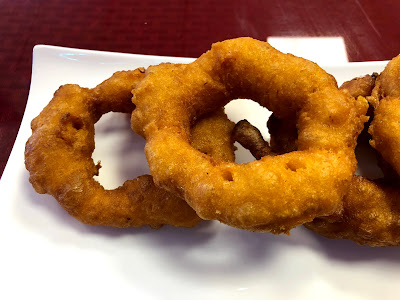 A special dessert was the Picarones, basically donuts made of sweet potato, squash and spices, and accompanied by Chancaca syrup. This is even a vegan dish! I enjoyed these Picarones, a great crunchy coating and a slightly sweet and soft interior. he syrup was an intriguing addition, not overly sweet with a more unique flavor. 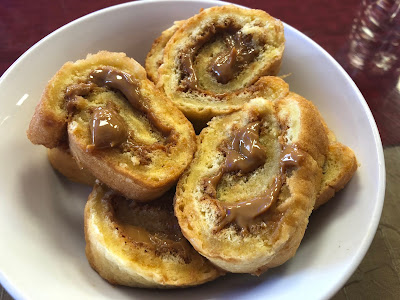 The Piononos were similar to slices of a jelly/cream roll, but filled with dulce de leche. The roll was soft and light, similar to the consistency of a sponge cake, and the sweet dulce de leche complemented the light cake. They were quite tasty, and small enough that you won't feel bad about having some for dessert. 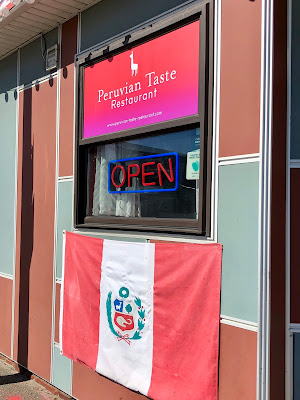 The Peruvian and Chifa cuisine at Peruvian Taste Restaurant is authentic and compelling, offering different ingredients, unique combinations and great taste. The food is fresh, well-balanced, reasonably priced, and prepared well, with even the simplest of dishes well executed. It's excellent comfort food, in a homey atmosphere, and will appeal to lots of different palates. I give this restaurant my highest recommendation.
In the near future, they hope to obtain a beer/wine license. They will also add more Peruvian and Chifa dishes, and maybe some Nikkei dishes as well.
Posted by Richard Auffrey at 3:00 AM

I shall be there soon

I've eaten here and it's really good. Going back soon for the ceviche.

This place is awesome. Ate here and loved it. Going back soon for the ceviche.