A Baijiu Class with Derek Sandhaus 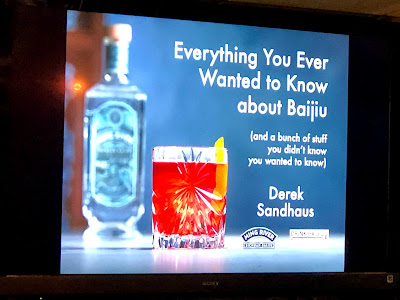 Baijiu might be the most popular spirit in the world, but it's still relatively unknown in much of the U.S. More education and exposure to Baijiu is needed to elevate the recognition of this fascinating spirit. I've written about 15 articles about Baijiu, helping to promote this beverage. Recently, i attended a Baijiu class held by Derek Sandhaus, a Baijiu expert, to expand my own knowledge and it was fun, tasty and informative. 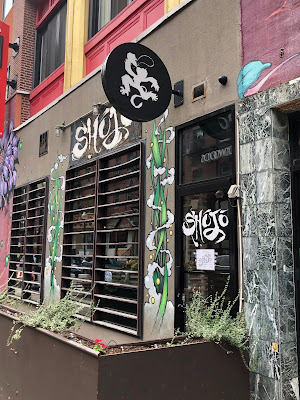 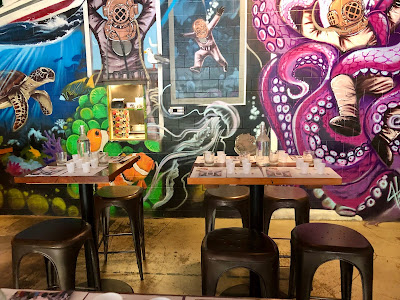 The class was held in Chinatown, at Shojo, and only a small group attended. It would have been better if the class was better attended, if more locals had come to learn about Baijiu. It remains a tiny niche spirit, but that needs to change. With all the emphasis on mixology in the Boston area, Baijiu would be an excellent addition to any bar as it's a versatile and unique cocktail ingredient. 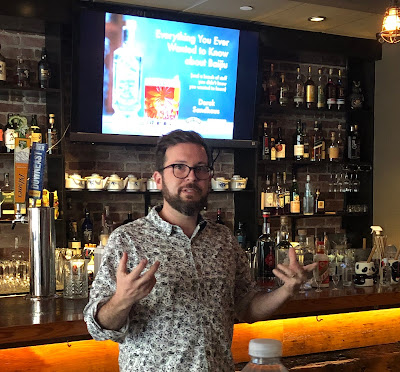 Derek Sandhaus, pictured above, has spent many years in China as a China-based writer and editor and has previously published two books, Tales of Old Peking and Tales of Old Hong Kong. He also wrote two books on Baijiu, including Baijiu: The Essential Guide to Chinese Spirits and Drunk in China: Baijiu and the World's Oldest Drinking Culture. I've read both books and they are comprehensive, educational and fascinating, definitely recommended. Derek also runs a Baijiu consultancy and is a partner in the Ming River Baijiu project. In person, Derek is very personable, down to earth, and obviously passionate about Baijiu.
During 2006-2013, Derek was in China working in the publishing business, eventually moving from Shanghai to Chengdu. He learned that the Sichuan province was the center of the Chinese distilling industry, and he became fascinated with Baijiu. He started to learn everything he could about Baijiu, visiting numerous distilleries, and that led to the publication of his first book on Baijiu.
During the course of the class, Derek provided plenty of information about Baijiu, from its lengthy history to its intriguing production process. Although many Americans think all Baijiu tastes like the famed Maotai, the category actually has much diversity, including at least 12 different styles. During the class, we sampled Baijiu from the top four types.
About 8 billion liters of Baijiu are annually produced in China, and there are a few Baijiu distilleries outside of China, in places from New Zealand to Oregon. Currently, the term "Baijiu" isn't legally protected so it can be used by any distillery around the world. As there are only a handful of non-Chinese Baijiu distilleries, there hasn't been a real need to protect the term, but that could change in the future.
Brand Finance creates lists of the most valuable spirit brands in the world, and in their latest list, the Top Five Spots all belonged to Baijiu producers, including Maotai, Wuliangye, Yanghe, Luzhou Laojiao, and Gujing Gong Jiu. The 6th spot was taken by Jack Daniels, and the rest of the Top Ten included Hennessy, Smirnoff, Bacardi and Johnnie Walker. Who would have realized the vast popularity of Baijiu? 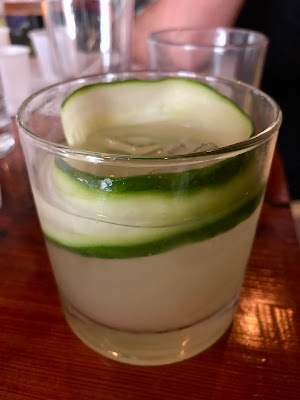 We began the class with a Baijiu cocktail, the Bai Bai Mule, which is on Shojo's Drinks menu. It's made with Ming River Baijiu, Cucumber, Lime, Mint, and House Ginger Beer. It was tasty and refreshing, not too sweet, with some tropical fruit flavors. An excellent summer drink, and a nice way to show the versatility of Baijiu. It possessed more flavor than a traditional Moscow Mule, which is made from Vodka. 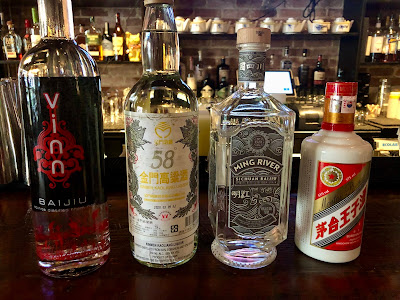 We then tasted 4 types of Baijiu, the most popular types, including Rice Aroma, Light Aroma, Strong Aroma, and Sauce Aroma. The Baijiu included Vinn Baijiu, Kinmen Kaoliang, Ming River and Maotai Prince, varying from 40% ABV to 53% ABV. The Vinn was produced from brown rice while the other three were made from sorghum. Each Baijiu had their own distinct flavor profile, and there certainly would be at least one type that appealed to any spirit lover. In China, Baijiu is commonly drank straight, in shots, but Americans might find Baijiu more appealing in cocktails, at least until they get used to the unique flavors of Baijiu. 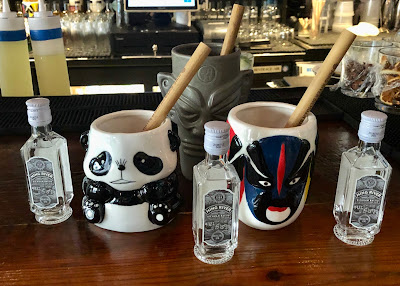 The Ming River Baijiu, which I previously reviewed, is a Strong Aroma Baijiu, the most popular type, which occupies about 70% of the market. It possesses three layers of flavor. 1) tropical fruit-pineapple, 2) floral, anise, licorice; and 3) funky, cheesy, earthy, umami. After Derek's first Baijiu book was published, he was approached about opening a Baijiu Bar in China. This bar, Capital Spirits, became the first Baijiu bar in the world. It's primary clientele were ex-pats and younger Chinese, who enjoyed cocktails.
Then, Derek, and his partners, Bill and Matthias, were approached by the Luzhou Laojiao distillery who wished assistance in producing a Baijiu that would appeal to the international market. They joined this project, which led to a variety of blending experiments, with input from numerous bartenders. The end result was Ming River Baijiu, which was intended to work well with a variety of cocktails, such as Tiki drinks.
The Ming River (about $38) recently became available in the Boston market and it would be an excellent introduction to Baijiu, showcasing its delicious taste and versatility. I've been enjoying a simple and refreshing blend of Ming River and lemonade. You can also find some suggested cocktails on their website. You could enjoy the Ming River on its own, or experiment with cocktails at home. 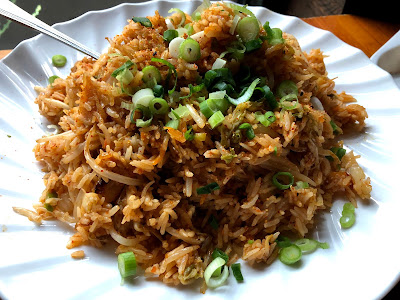 Shojo also provided some snacks for the class. 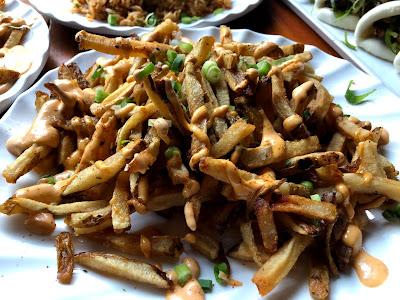 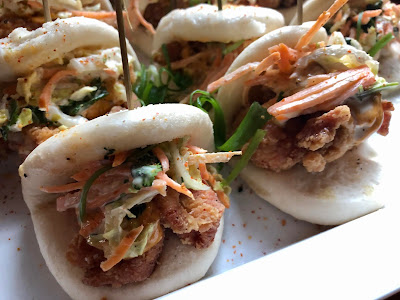 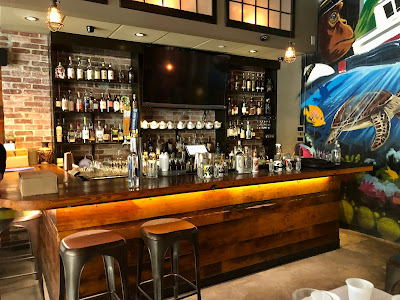 For more information about Baijiu, Derek has created an online course, Baijiu 101: The Fundamentals of Chinese Spirits. It is free and additional courses will be added in the future.
Expand your palate and try some Baijiu, ignoring your preconceptions about it. The Ming River Baijiu would be a good starting point, to experiment with your favorite cocktails. Or go to some of the restaurants and bars that have Baijiu cocktails and give one a try.
Posted by Richard Auffrey at 3:00 AM