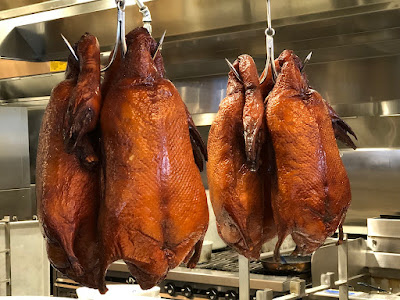 The new Hub Hall, located next to TD Garden, has 18 food & drink spots, including outposts of some of my favorites like GreCo and Cusser's Roast Beef & Seafood. The new Momosan Ramen Boston may also become a new favorite.
The notable Chef Masaharu Morimoto, of Iron Chef fame, is behind Momosan, which is intended to showcase ramen, as well as Japanese grilled dishes and bar snacks. The first Momosan was opened in New York City in 2016, and additional locations have opened in Waikiki Beach and Seattle, with another spot planned to open in Brooklyn.
Momosan is open for lunch and dinner, and I stopped there recently for lunch. The Lunch Menu is extensive, with Sushi, Cold &  Hot Appetizers (about 20 options, priced $7-$14, with plenty of enticing choices, like Duck Tacos and Spicy Wontons), and Ramen (6 options, $16 each, such as Tonkotsu, Tsukemen, & Spicy Vegan Miso. There are other entrees as well, from A5 Waygu to Poke Don. I could have easily ordered several appetizers, to sample a range of dishes, but wanted some Ramen so chose to opt for only one hot appetizer. 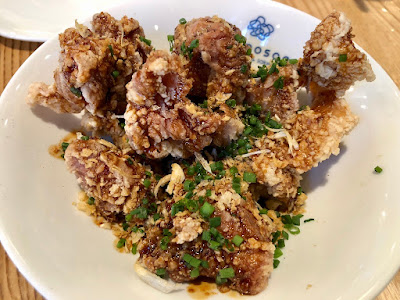 The Karaage ($12) is Japanese-style fried chicken with a spicy garlic soy sauce. This is a favorite dish of mine, and I often order it at a new restaurant, to compare it with previous dishes I've enjoyed. First, this dish was ample, with plenty of pieces of fried chicken, and was large enough to share. Second, the fried coating was crunchy and flavorful, enhanced by the spicy garlic soy. There was plenty of moist chicken inside the crisp coating, and the dish definitely is near the top of my favorite karaage dishes. 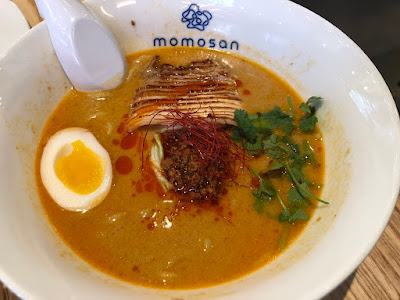 I also selected the Spicy Tan-Tan ($16), with a spicy sesame broth, miso ground pork, cilantro, scallion and ajitama (an egg). The broth was compelling, with a rich sesame flavor that was nicely spiced. The noodles were cooked just right and the miso pork and egg were tasty. Everything was well composed and balanced, an excellent choice for a hearty lunch.
I'll definitely be returning to Momosan soon, to try more of the menu, and maybe get some Sake.
Posted by Richard Auffrey at 3:00 AM