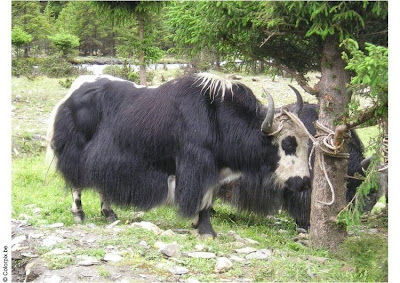 If you want to come to my house for a BBQ and are squeamish about what type of meat you eat, then maybe you should reconsider. I love trying exotic meats so you never know what that burger on the grill might be. Though if you tried one of the burgers, you might not even realize that it is not beef.
On a recent shopping trip to Savenors, I picked up some yak burgers. A yak is a species of cattle which lives in the region of Tibet and Nepal, often in cold, high altitudes. It has long shaggy hair, large curvy horns and humped shoulders. There are both wild and domesticated yaks, and they are used both as a draft animal as well as for their milk, meat, and leather.
My yak though came from Colorado. It appears that a couple thousand yaks are raised in the United States, in places like Colorado, New Mexico and Nebraska. It also appears that these yaks are often raised in a more natural way, without the use of hormones and antibiotics. It helps that they only need to eat about half of what a normal cow does.

Don't say yuck to yak until you have tried it. First, it is healthier for you than beef. It has about one-sixth the fat of beef, as well as more protein and vitamins than beef. Second, it looks like beef and if you had burgers side-by-side, you would not be able to determine which was which. Third, it has a lighter flavor than beef and is never gamey.

I enjoyed the yak burgers and they did have a slightly different flavor than beef, though you might have ignored it if you thought they were just beef. The difference was subtle and hard to pinpoint though maybe it is best to say it was a leaner taste. They should appeal to almost any palate, at least anyone who loves beef. I would certainly buy them again. I paired a nice Sutton Cellars Carignane with the burgers, an easy drinking wine with some nice blueberry flavors.
So why not be adventurous and try something a bit more exotic? Savenors is a great place to find these strange meats.
Posted by Richard Auffrey at 6:00 AM

I like the idea of the leanness of the meat. Thanks for sharing!

There's a Tibetan place in one of the towns near where I went to college. They had yak dumplings on the menu, but they weren't always available - not when I went there, at least. I'd certainly try a yak burger - I might have to make a trip to Savenor's.

"Don't say yuck to yak until you have tried it." We may need to hire you a marketing-PR rep! We think yak is fantastic, but we raise yaks. Thanks for the great article!