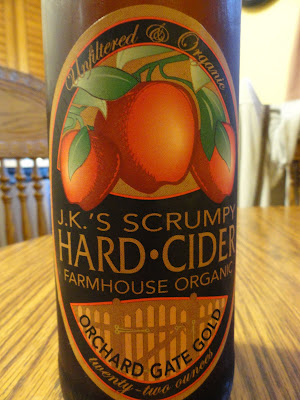 Have you ever gone scrumping? Maybe you have but just didn't know the term for what you were doing. Scrumping entails stealing apples from someone else's orchard. I bet a number of you have done that, primarily in your youth.

The British word "scrumping" may derive from an older term "scrimp" which meant a "small or withered apple." It also led to the word "scrumpy," which refers to a style of hard apple cider most often made in South West England.

I recently had a Scrumpy, though not quite the same as mentioned above. While at the new UrbanGrape wine store, I got in a discussion about hard cider and learned they carried a hard cider from J.K. Scrumpy, distributed by Atlantic Importing. I decided to buy a bottle and give it a try, also to see how it compared to the Woodchuck hard ciders.

The Scrumpy actually has a lengthy moniker, J.K.'s Scrumpy Hard Cider Farmhouse Organic Orchard Gate Gold (22 oz/about $7). Let me break down that name a bit. J.K. may stand either for the owner's name, "Jim Koan," or (if you ask his wife) "Jim and Karen." It is not really made in the Scrumpy style, but is considered a "farmhouse cider" and it is an organic product. After harvest, they have a tradition of savoring a glass of cider, the "Golden Cider" at their "Orchard Gate."

This cider has been made from apples grown at Almar Orchard in Flushing, Michigan. The farm is family owned, for four generations, and has about 500 acres, growing over 30 varieties of apples. They have been making hard cider on the farm since the 1850s, and the farm has an interesting history. The sale of this cider saved the farm during the Great Depression and during Prohibition, they sold their "Special Farm Cider." They currently make their hard cider using the old family recipe.

This hard cider is made from only two ingredients, apple juice and yeast, and that is it. There are no other additives, sulfites or preservatives. It is also organic and has an alcohol content of 6%. After the harvest, the apples are pressed and ferment for up to six months. The cider is then allowed to age in the bottles for several weeks.

The Scrumpy has a bit of a cloudy, golden appearance, due to the fact that it is unfiltered. It emits a strong and pleasant apple aroma. When I tasted it, it certainly seemed very much like an apple cider, though with carbonation and a tiny bit of an alcoholic kick. It tends to be more on the dry side, but with hints of sweet and tart apple. The apple taste is prominent and delicious, and it is crisp and refreshing. It was very easy to finish off the bottle, and I could have opened another bottle if I had it.

In comparison to the Woodchuck Hard Cider, the Scrumpy is more carbonated, though still not as much as a soda. The Scrumpy also is closer in style to a regular apple cider than the Woodchuck. Which is better? Hard to say as they seem to be different styles, and I like variety. I really do like the fact that it is organic, and is only made with juice and yeast. That is a strong asset for the Scrumpy. I enjoyed the taste of the Scrumpy, and would recommend it to anyone who enjoys hard cider or even just apple cider.
Posted by Richard Auffrey at 6:00 AM

Thank you for all the information! J.K.'s Scrumpy seems to be the best tasting hard cider I've ever sampled. Woodchuck tastes really bad in comparison. I'm not an alcohol connossieur nor do I have an experienced palette, but I do know that J.K.'s Scrumpy tastes EXACTLY like apples, it smells like apples, and you feel like you're in the country in the old days, and at 6% it is well worth it! It's difficult to locate, though... the distributors only ship in extremely small quantities. I've tried 8 other ciders and they all pale in comparison. I'm not going to waste any more time and money... when you find a winner, stick with it!

Yes, but where can you get Scrumpy? I found some in Nova a while back but I live south of Richmond, Virginia. This is some good cider but I simply cannot find it around here!

I'm in Washington State and somehow acquired a bottle but I don't remember where. In any case, I agree, I love cider, un general but Scrumpy's was far and away the best I've tasted. I have kept the bottle so I won't forget what it is I want to find.

Im in Clermont, FL and that only place I have found it was at Whole Foods. I won't even buy woodchuck anymore. My second choice for cider is Angry Orchard's Crisp Apple. Scrumyp's is by far the best cider, not even a question.

In Richmond, go to Once Upon a Vine on Macarthur Ave on Richmond's Northside. They have Scrumpy, Magners, and a bunch of others.