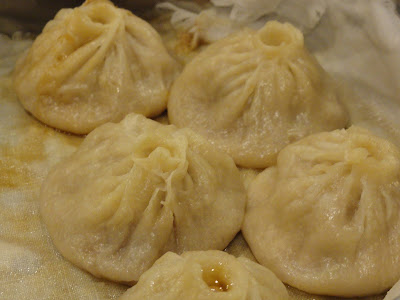 Do you know what food this is, which resembles a fleshy volcano?

Though many people have sampled the usual Chinese dumplings (which might also be called pot stickers or Peking Ravioli), it seems fewer people have tasted Xiao long bao, which are also known as soup dumplings.

It is thought that xiao long bao originated only in abut 1875, in Nanxiang, a suburb of Shanghai. The alleged inventor sold them out of a food stall next to the Guyi Garden, a famous park in the city. In time, these soup dumplings spread across Shanghai.

Xiao long translates literally as "small, steaming basket" while bao, or more properly baozi, are "steamed buns." These dumplings are commonly steamed in small bamboo baskets, so the name is fairly literal. The dumplings are usually made with unraised flour, making them smooth and partially translucent. They are traditionally filled with pork, but other ingredients can also be used, everything from beef to seafood.

What primarily differentiates soup dumplings from other types of dumplings, is that they contain a broth within the wrapper. Meat gelatin is placed inside the dumpling, and it melts when the dumpling is steamed, creating a savory broth. The traditional dipping sauce is Chinkiang vinegar, a black rice vinegar, with ginger slivers. The Chinkiang has a rich, smoky flavor. 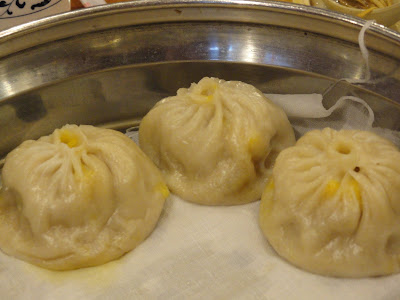 The only place I have eaten soup dumplings in Boston is at the Gourmet Dumpling House in Chinatown. But, as they are so delicious and inexpensive, I don't have much incentive to seek them out elsewhere. Plus, I don't think there are too many other places in Boston that serve these anyways. On their menu, the soup dumplings are referred to as "mini juicy dumplings" and come with either pork ($6.50) or pork & crabmeat ($7.25). For that price, you receive eight dumplings, and I don't consider them "mini" at all.

A couple nights ago, I stopped at the Gourmet Dumpling House with two of my friends, Dale and Jen, and we shared a few orders of soup dumplings, and a couple other appetizers (including a delicious dish of pickled cucumbers with garlic and a spicy sauce). Now, there is no single way to properly eat a soup dumpling, and below you will see two different ways to do so. Though I should mention that there are some potential pitfalls to avoid when eating these dumplings. 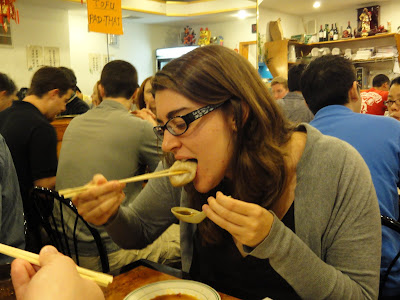 This was Jen's first experience with soup dumplings and she said, "They were all I dreamed they would be, and more!" Note her intense rapture with the dumpling. She, with an adept use of her spoon, is biting a small hole in the dumpling so she can suck out the broth. If you do that wrong, the broth can either squirt out on your clothes, or dribble out onto the table. You must also be wary as the broth can be very hot when the dumplings first come to your table. Give them a little time to cool down or you'll find your mouth seared from the hot soup.

Me? I used both approaches as each has their own merits. As for the two types of soup dumplings, Jen preferred the pork & crab while Dale and I preferred just the pork. Though we all enjoyed both types.

If you haven't experienced soup dumplings, then get off your butt and make the trek to Chinatown to the Gourmet Dumpling House. You'll be thanking me later.

Posted by Richard Auffrey at 9:30 AM

Love the XLB's. We eat at Din Tai Fung in Taipei pretty much every week!

I love dumplings...seriously one of my top 5 favorite foods. I could eat them at every meal.
Dale has excellent dumpling eating technique.

LOVE Gourmet Dumpling House! Make sure to order the scallion pancakes next time you go - they're a bit too greasy, but the texture is unbelievably flaky.