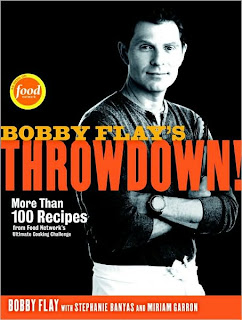 It must be initially intimidating when a famous chef unexpectedly shows up at your restaurant and challenges you. Yet it must then be comforting that the focus of your challenge is your signature dish, a recipe you have made many times over and of which everyone raves. Plus, the challenge occurs on your own turf, surrounded by many of your fans. Maybe the famous chef should actually be the intimidated one.

If such challenges interest you, then you might want to check out Bobby Flay's Throwdown! More Than 100 Recipes from Food Network's Ultimate Cooking Challenge ($27.50) by Bobby Flay (with Stephanie Banyas and Miriam Garron).  The book was published in October 2010 by Crown Publishing Group, a division of Random House, and is a hardcover of 272 pages.

Bobby Flay needs little introduction, being a well-known chef and TV personality.  He owns over ten restaurants, hosts numerous cooking shows on Food Network, and has written nine cookbooks.  One of his TV shows is Throwdown!, in its eighth season, where Bobby Flay challenges other cooks who are well known for a specific dish. Bobby tries to best these cooks, and only wins approximately 1/3 of the time, which must be humbling. Now, Bobby has penned a cookbook based on the series, sharing his own recipes as well as those he has challenged.

The book contains about fifty chapters, each about one specific Throwdown episode, and overall it contains over 100 recipes. Almost every chapter begins with an inside look at the episode, also giving you contact information for the challenged chef/restaurant.  Then it presents copies of both recipes from the throwdown, indicating which was the winner. Not all of the episodes from the first seven seasons are included, though I suspect a companion book could be in the offing for the future.

The episodes that are provided run a wide gamut of foods, from breakfast to dessert, from paella to cheesesteak. I was excited to see it contained the Sticky Buns throwdown with local chef Joanne Chang of Flour Bakery and Myers+Chang, both places I highly recommend.  Joanne defeated Bobby, and you can find her winning recipe in the book.  Joanne also has her own cookbook which has just been released, Flour: A Baker's Collection of Spectacular Recipes, where you can find many more of her recipes.  She is one of the hardest working chefs in the Boston area.

I enjoyed this book because the recipes come from chefs who are especially famous for these recipes.  The recipes are certainly well tested, and have been enjoyed by thousands of people.  Plus, you have Bobby's recipes for comparison.  The food is primarily comfort food, so everyone should find something that appeals to them. Who doesn't enjoy fried chicken, grilled cheese, buffalo wings, and ribs?  I think the difficulty level of the recipes ranges from simple to complex, and probably averaging around medium difficulty. There are also plenty of compelling color photographs of both the competitors and their dishes. Beside being a cookbook, the book can also be used as a travel guide, alerting you to must-stop restaurants all over the country, though I would have liked an index to all of the locations that are listed.

Overall, I enjoyed this cookbook, will find it useful and give it my recommendation.  If you enjoy Throwdown!, then this is a must-have book. If you are seeking some top recipes for many of your favorite comfort foods, then check out this book.
Posted by Richard Auffrey at 3:00 AM