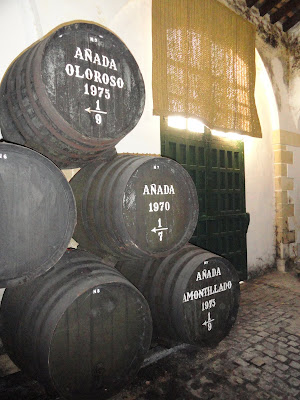 What is one of the tastiest, most intriguing, and unique wines that you're probably not drinking? It's Sherry, a fascinating fortified wine from a small region of southern Spain.

Sherry has a fascinating history, and the Palomino grape, which is the staple of about 95% of all sherry, extends back about 3000 years. That is a true taste of history in every glass of Sherry. The production process is unique and equally compelling, from the mysterious flor to the use of the solera system for aging. The Sherry bodegas often have some interesting stories, many which captivated me. How many other wineries have albino peacocks, Piccaso artwork, or leave out wine for the mice? It is extremely food friendly, often very inexpensive, and is absolutely delicious.

Over all the years that I've been a passionate advocate of Sherry, I've written over 40 articles about Sherry, and felt it would be very helpful to my readers to compile the links to these posts in a single place. This post will be that repository, and as such will be constantly updated when I write another sherry article. Some of these articles were written before my trip, and others afterwards.

I hope you enjoy.