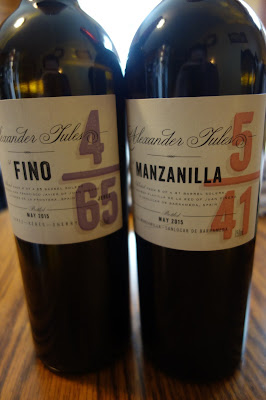 Manzanilla is sometimes known as vino de la alegria, the wine of joy, as well as el mas fino de los finos, the finest of the fine. It is a type of sherry unique to a single city in the sherry region, Sanlúcar de Barrameda, and even has its own Denominación de Origen, called Manzanilla de Sanlúcar de Barrameda. Commonly, it is drier and paler than Fino sherry, with a taste often thought to be salty, reminiscent of the briny sea off the coast of Sanlúcar.

Spaniards love Manzanilla and a single example will illustrate the extent. At the Sevilla Feria, the famed Spring Festival of Seville, the capital of Andalusia, it is said that attendees drink approximately 600,000 bottles of Manzanilla over the course of only six days. What a massive consumption in such a short period of time. And when we look at total Manzanilla consumption in Spain, we see more evidence of their love for this Sherry style.

For more information about Manzanilla, you should check my two-part article on this sherry: Manzanilla: The Neglected Sherry (Part 1) and Manzanilla: The Neglected Sherry (Part 2). Learn more about its origins and production methods, its different styles and food pairing. It is certainly one of my favorite sherry types, especially as I love its briny nature. It can be like a bottle of the ocean, bringing to mind fresh seafood and time spent on a boat on the sea.

Alexander Russan, the founder of Alexander Jules, is similar in some respects to a negociant, visiting Sherry producers and cellar owners and carefully selecting some of their barrels to create a special Sherry. I previously reviewed the first three of his Sherries, as well as provided more info about his company and you should check out my article for additional background on Alexander Jules. Those three Sherries made my 2014 list of Top Ten Wines Over $15. Last year, I reviewed his Los Abandonados 6/8 Oloroso and it made my 2015 list of Top Wines Over $50.

Recently, he released two new Sherries, the Fino 4/65 and the Manzanilla 5/41, and I received media samples of both. On Wednesday, I posted my review of the Fino and now I'm here to review the Manzanilla.

The Manzanilla 5/41 (about $40/750ml) was bottled in May 2015, only 1000 bottles were produced. and it has a 15% ABV. The Sherry, which is an average of eight to nine years old, is a blend of five barrels from the Maruja solera in Juan Piñero's La Playilla de la Red bodega, with the grapes from the Sanlucar Pago del Hornbill. The bodega was founded in 1910 while the Maruja solar was only started in 1980.

Usually, solera barrels are kept at the bottom of the stacks but in this case, the Maruju solar barrels are actually at the top. This makes a difference as the higher barrels receive less humidity but higher temperatures, causing the flor to be thinner and have a lesser impact on the Sherry. Russian chose 5 barrels, from the top row, out of the 41 in this group. In addition, when the sherry was ready for bottling, he didn't add any sulfites and the Manzanilla was not fined or cold stabilized, though it was moderately filtered. As such, this Manzanilla could likely qualify as en rama, raw sherry, which is as close to sherry out of the cask as you will find.

With a deep golden color, there is an aromatic and alluring salty edge to its aroma, a touch of the sea. As soon as I removed the cork, the aromas seemed to fill my nose and I felt transported back to Sanlucar, sipping Manzanilla on a patio with tapas, including jamon de bellota. As I sipped the sherry, I found it to be bone-dry, briny, and with nutty undertones. It was an elegant sherry with a delicious savoriness which will make you yearn for another glass.

Paired with a sashimi dinner, it was a superb pairing, the silky fish with salty soy sauce balanced well with the dry and briny Manzanilla. I would love this sherry with a couple dozen East Coast oysters, or any type of seafood for that matter. It's acidity would help cut through a creamy clam chowder or deal with a buttery lobster.  I'm sure this Manzanilla would pair well with fried foods, spicy Asian cuisine, and much more. Like Fino, it is very food friendly.

Between the new Alexander Jules Fino and Manzanilla, my person favorite was the Manzanilla, because I generally prefer that sherry type to Fino. However, both sherries are excellent, great examples of the types and you won't go wrong with either one. Both receive my highest recommendation, though I'd personally give a little more push to the Manzanilla.