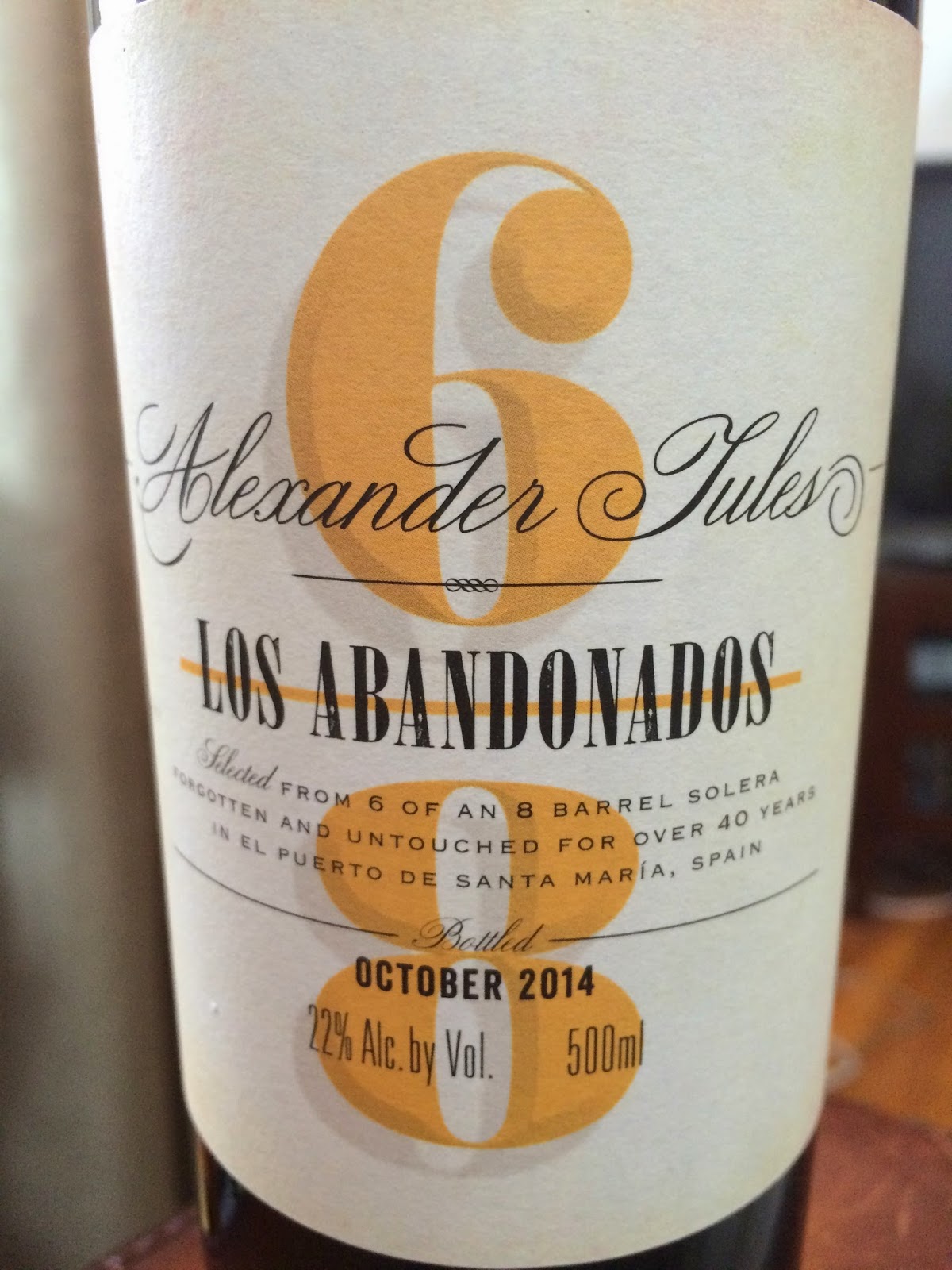 Eight barrels of a wine were "lost" for about forty years, forgotten by the family which owned them. However, like the adventures of a vinous Indiana Jones, these barrels were finally rediscovered, and now are being shared with the world.

For many wines, this might have been their death, to sit untouched in a wooden barrel for that length of time, but this wine is an Oloroso Sherry, a fortified wine that has the potential to remain and evolve that long in a barrel. What might this wine taste like? What was the effect of that lengthy aging process? This past weekend, I had the exciting opportunity to answer those questions for myself.

Alexander Russan, the founder of Alexander Jules, is similar in some respects to a negociant, visiting Sherry producers and cellar owners and carefully selecting some of their barrels to create a special Sherry. Russan created the Los Abandonados 6/8 Oloroso, using the "lost" Sherry, and sent me a media sample. I previously reviewed three of his other Sherries, as well as provided more info about his company and you should check out my article for additional background on Alexander Jules. Those three Sherries made my 2014 list of Top Ten Wines Over $15 and it is very likely that Los Abandonados will end up on one of my Top Ten Wine lists of 2015.

The original bodega, located in El Puerto de Santa Maria, was once an almacenista for over 100 years, a small family business that matured sherry in various soleras to sell to other companies. The solera for Los Abandonados was begun sometime during the 1820s-1830s, and the barrels became the sacristia, the very best of their Sherry. About forty years ago, the family moved from their original location, and somehow forgot about the eight barrels of this solera. The Oloroso sat in those barrels, losing more than half their contents to the angel's share, getting more concentrated and rich. Could it survive forty years?

A few years ago, the current owner inherited the estate when his father died and it was only then, as he tried to catalog all of the assets did he discover the "lost" solera. Unfortunately, the building which stored the barrels had partially caved in at some point years ago. Trees and other vegetation had claimed part of the building, but the worst part was that sunlight had adversely affected two of the barrels. The other six barrels though were protected from that sunlight and were still in excellent condition, containing an amazing Oloroso.

Russan learned of this lost solera from a person on Twitter, Federico Ferrer, who owns the Cuatrogatos Wine Club. Russan contacted the owner, traveled to the bodega and convinced them to allow him to bottle some of the Sherry, creating a blend from the six good barrels. In October 2014, he produced 770 bottles,which are currently available for sale only in Spain, the U.S. and Japan. He didn't bottle all of the Oloroso in the barrels, so there is the possibility that he could bottle more in the future, but there are certainly no guarantees that will ever occur. This might be your only chance to ever taste this Sherry.

Los Abandonados comes in 500ml bottles (about $70), has an alcohol content of 22%. and is unfiltered, unfined and does not contain any added sulfites. It is probably impossible to determine the average age of this Oloroso except that we know it is old, and that the youngest wine in the solera is at least 40 years old. It is probably a Sherry that should be decanted for at least a few hours before drinking, especially as it might contain some sediment.

Russan originally thought that the Oloroso might pair well with chicken but he found that it was too big of a wine for the poultry, pairing better with beef or some other strong meat. Based on that info, I thought that it would pair well with my Easter lamb dinner so I chose to open it this past Sunday, to be the centerpiece of our dinner. Interestingly, we also were having a roast chicken with our lamb so I could even consider that pairing too.

I decanted the Sherry on Easter morning, finding almost no sediment in the bottle. The wine evidenced a dark mahogany color and possessed an enticing aroma, a complex melange which indicated great promise. I sampled a bit of the wine at that time, to ascertain its taste straight from the bottle, and was struck by its powerful intensity and extremely lengthy finish. That excited me, making me even more eager to drink the wine with the lamb. I left the Oloroso in the decanter for about five hours until dinner.

That length of time mellowed the Sherry to a significant degree, making it far less massive and more silky smooth. The aromas were still as alluring, and the taste was even more complex, with such an intriguing blend of flavors. With plenty of acidity, this dry sherry presented strong briny notes, nutty aspects, and flavors of caramel, dried fruits, leather, and a subtle earthiness. The finish was lengthy, tantalizing and extremely satisfying. Simply put, this was an amazing Oloroso, one which would impress any wine lover. It is meant to be slowly savored, to appreciate all of its nuances.

It was an excellent pairing with the roast lamb, and everyone who tasted this Sherry was impressed. It wasn't the best pairing with the chicken, being a bit too intense for the mild meat, though it actually worked well with the crisp, roasted skin. We finished the entire bottle, and I sipped my final glass very slowly, reveling in the wonders of this treasure. Russan has created another superb Sherry, and it garners my highest recommendation. Anyone who loves a complex, intriguing and delicious wine should seek this out and you won't find many other wines of this age and quality at such a reasonable price.
Posted by Richard Auffrey at 3:00 AM

Fascinating. The idea of a wine ‘lost’ for 40 years has really captured my imagination, especially as I’m looking for a complex, intense wine to serve with wild boar, which is another recent discovery of mine. I’m not usually a huge sherry fan, but Los Abandonados isn’t a ‘usual’ sherry, by the sound of things.

Hi Richard.
I discovered your blog thanks to a comment by good friend Alex Russan on Facebook. I'm so glad you enjoyed the wine.
And also wanted to thank you for mentioning my tiny little company Cuatrogatos Wines in your post about Los Abandonados sherry wine. That was our first collaboration and since then we have had some others, and soon you'll see the results (in a glass, obviously!).
You should try visiting the area sometime, and then you'll find myself and a bunch of friends and winemakers showing you the best of sherry land.
Kind regards.
Federico Ferrer

Hi Federico:
Nice to meet you online, especially as it is always great to meet another Sherry lover. I visited Jerez back in 2010, had a great time, and would love to return one day. It was fascinating to visit the bodegas, meet some great people and enjoy lots of delicious Spanish cuisine. Sherry has a special place in my heart and Alex is bringing some amazing Sherries into the U.S.