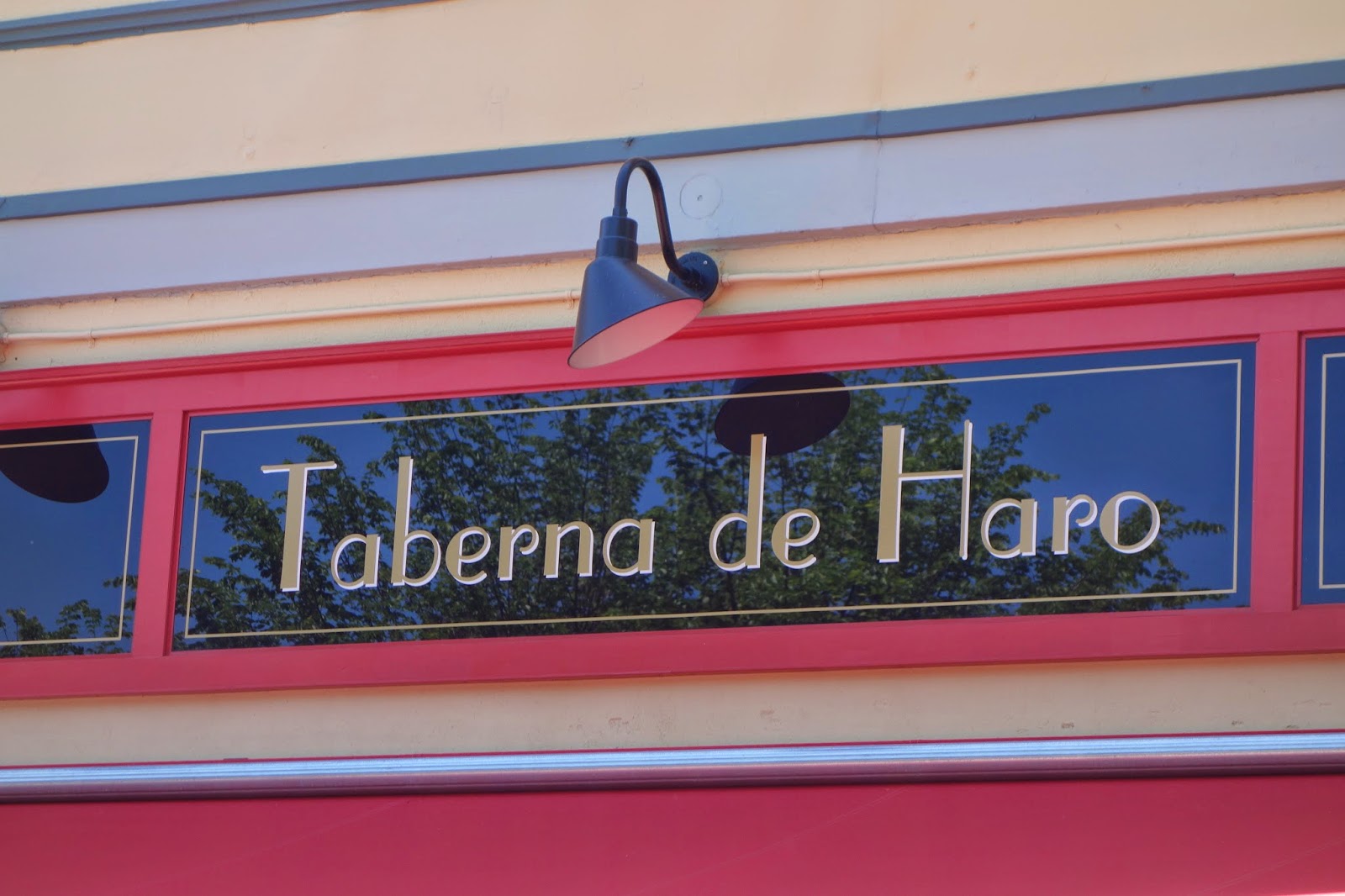 Would you drink a wine that was described as "caramelized fish roe" or "sugar coated fish scale?" Before you answer, know that those were complimentary comments and this wine was a huge hit with the wine lovers savoring it yesterday.

As I previously mentioned, this is International Sherry Week, and yesterday I attended a lunch tasting of three new Sherries at Taberna de Haro. It was a perfect day, sunny and warm, and a small group of us sat outside the restaurant, enjoying some tapas with our Sherry. It brought to mind my time in Jerez, sitting outside a tapas bar, and sipping Sherry. Chef Deborah Hansen led the tasting, which also became a round table discussion on all things Sherry, from the public perception of this unique beverage to retail sales. Fun, informative and so very delicious.

In the U.S., we have experienced only a portion of the Sherry styles and types that are available in Spain. Deborah mentioned that she was once told that Spaniards didn't believe our market was ready yet for certain Sherries, that they didn't want to confuse the U.S. marketplace. It is as if they want us to first move beyond sweet Sherry, and to better understand and appreciate dry Sherry. For example, it was only relatively recently that En Rama Sherry, a lightly filtered wine, has been made available in the U.S. As we embrace Sherry more, then we will eventually find an even greater diversity in the market, and that is very exciting. 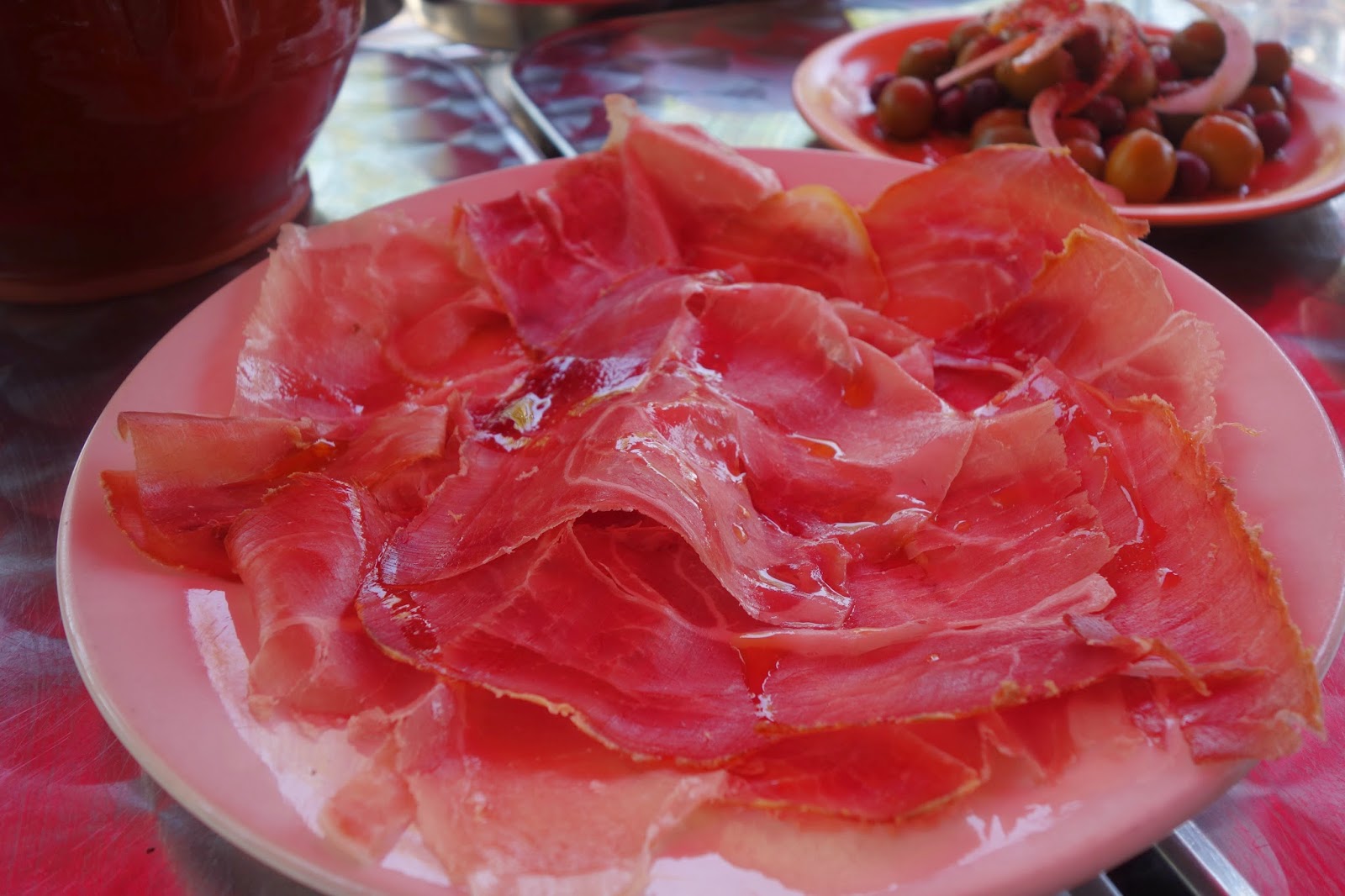 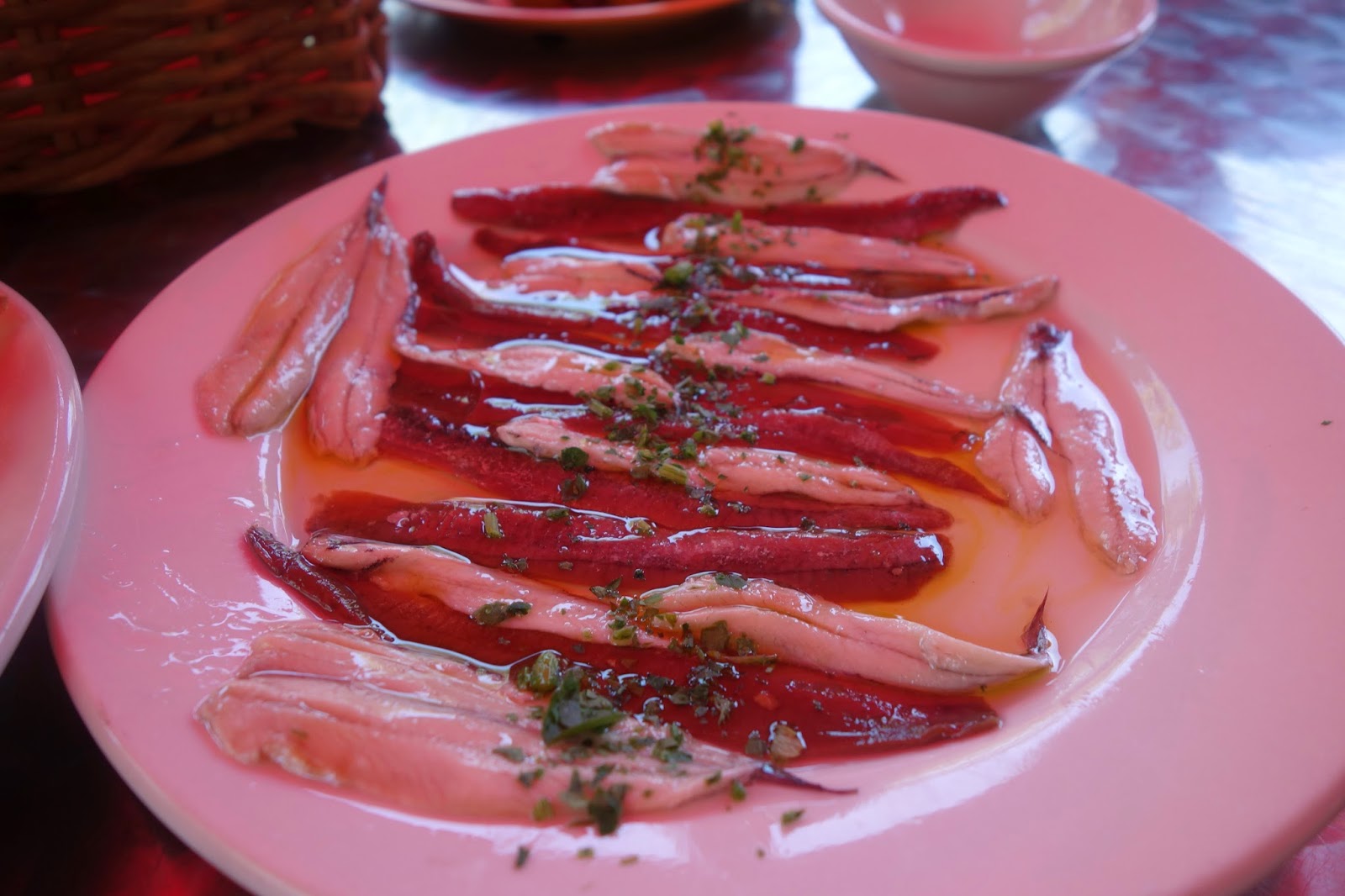 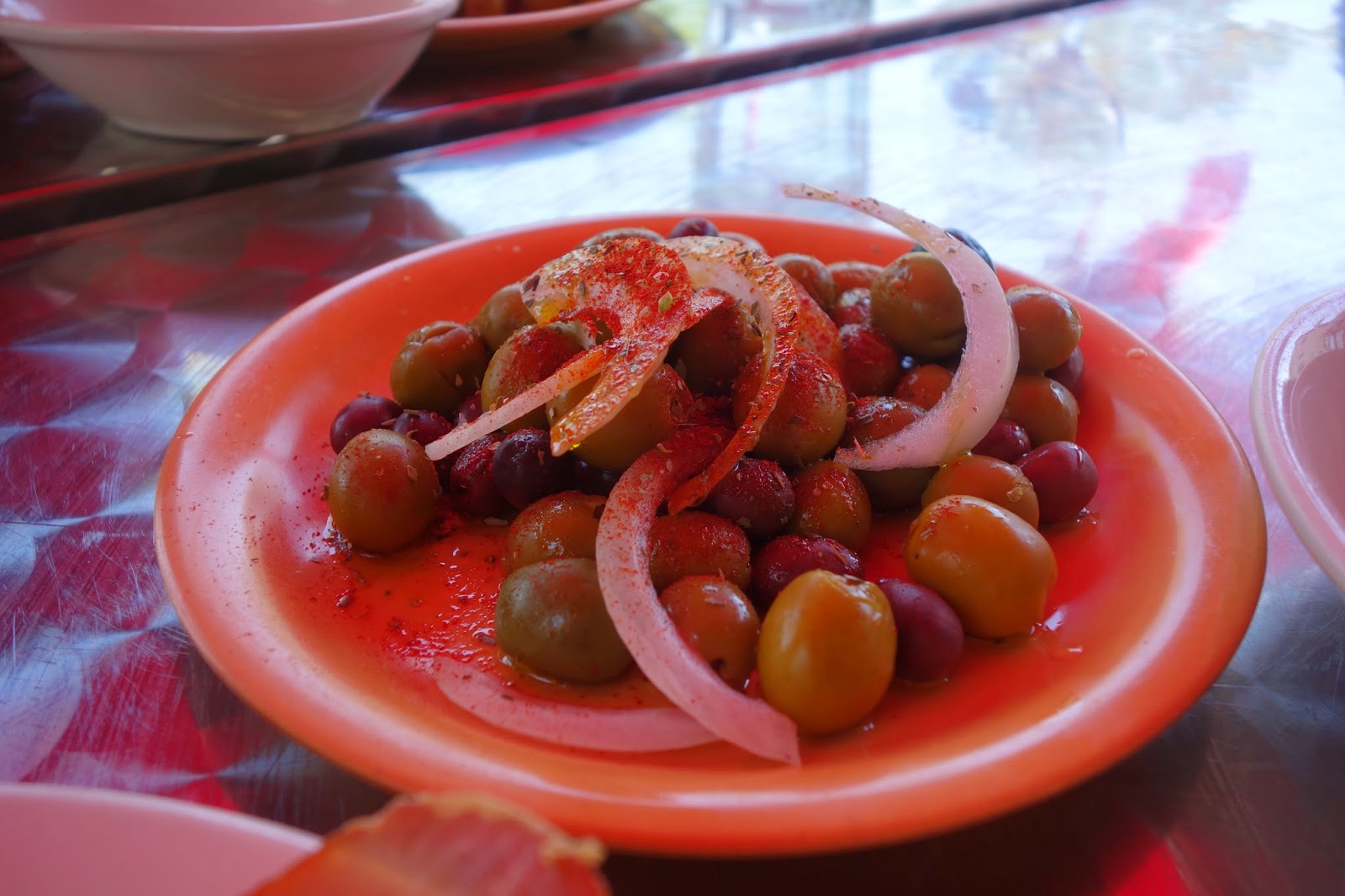 And of course some Olives. Sherry, especially Fino and Manzanilla go great with salty foods. 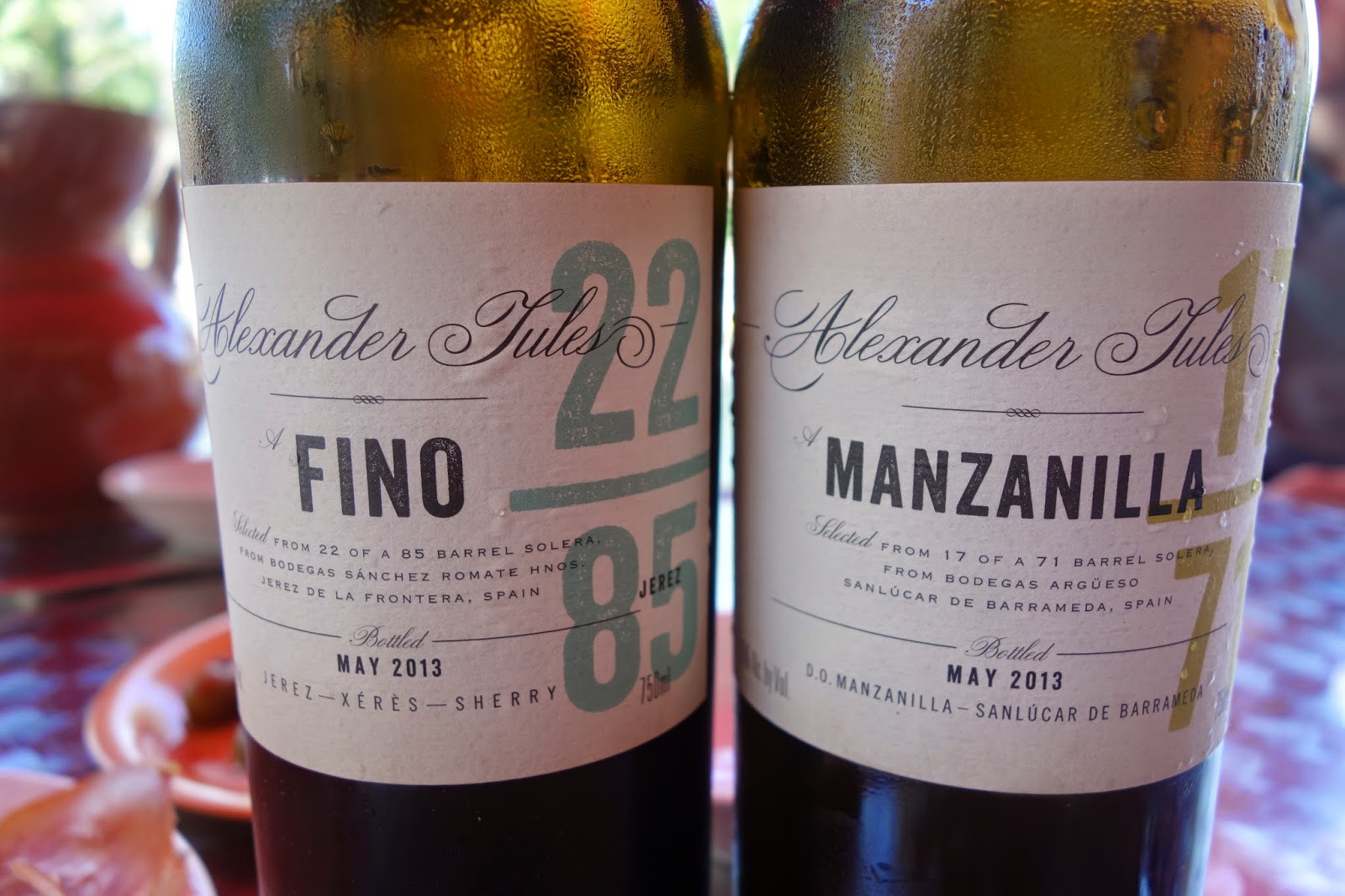 The three Sherries we tasted were from the portfolio of Alexander Jules, a company that was founded in 2012 by Alexander Russan. This company is not a Bodega nor an Almacenista but is more similar to that of a Negociant. Alexander visits Sherry producers or cellars, tastes through many of their barrels, and selects a number of barrels to create a special Sherry, what he feels will make a compelling wine. The Sherry is then sent to a bottler, who also will filter and/or fine the wines. This is very similar to what is done by the well known Equipo Navazos.

Alexander got interested in Sherry while he was in college, finding great complexity in Sherry at a very reasonable price (which is still the case). He eventually starting working in the coffee industry, where he apparently developed an excellent palate which would later serve him well with Sherry. Seeking a new challenge, Alexander decided to get into the Sherry business. The Spanish are very open to business dealings with foreigners, and Alexander must have impressed them sufficiently that some of them have chosen to work with him.

After selecting a Sherry, Alexander wants them bottled with minimal processing, only a bare essential amount of filtering. His intention is to present a Sherry as close as to what it tastes like directly from the barrel. Too much filtering can also strip flavor and color from a Sherry. It is fascinating that minimal filtering permits some living matter, generally yeasts, to remain within the bottle, so the Sherry remains a living wine, and will evolve over time in the bottles. These Sherries should age well, and it would be intriguing to see how they develop over the years.

Alexander, who is based in California, noticed Deborah frequently tweeting about Sherry and he contacted her to see if she were interested in trying his Sherry. He eventually mailed her samples and she was enamored with their taste and complexity. After initially tasting them, she let them sit for a week and tasted them again, to see how they changed with time. She liked their evolution, and noted that they tasted differently, though still good.

I first tasted the three Alexander Jules Sherries (a Fino, Manzanilla & Amontillado) a few weeks ago while dining at Taberna de Haro with two good friends. I was impressed then and was eager to taste them again yesterday, to learn more about these Sherries. Once again, the Sherries impressed and I highly recommend that everyone check them out. 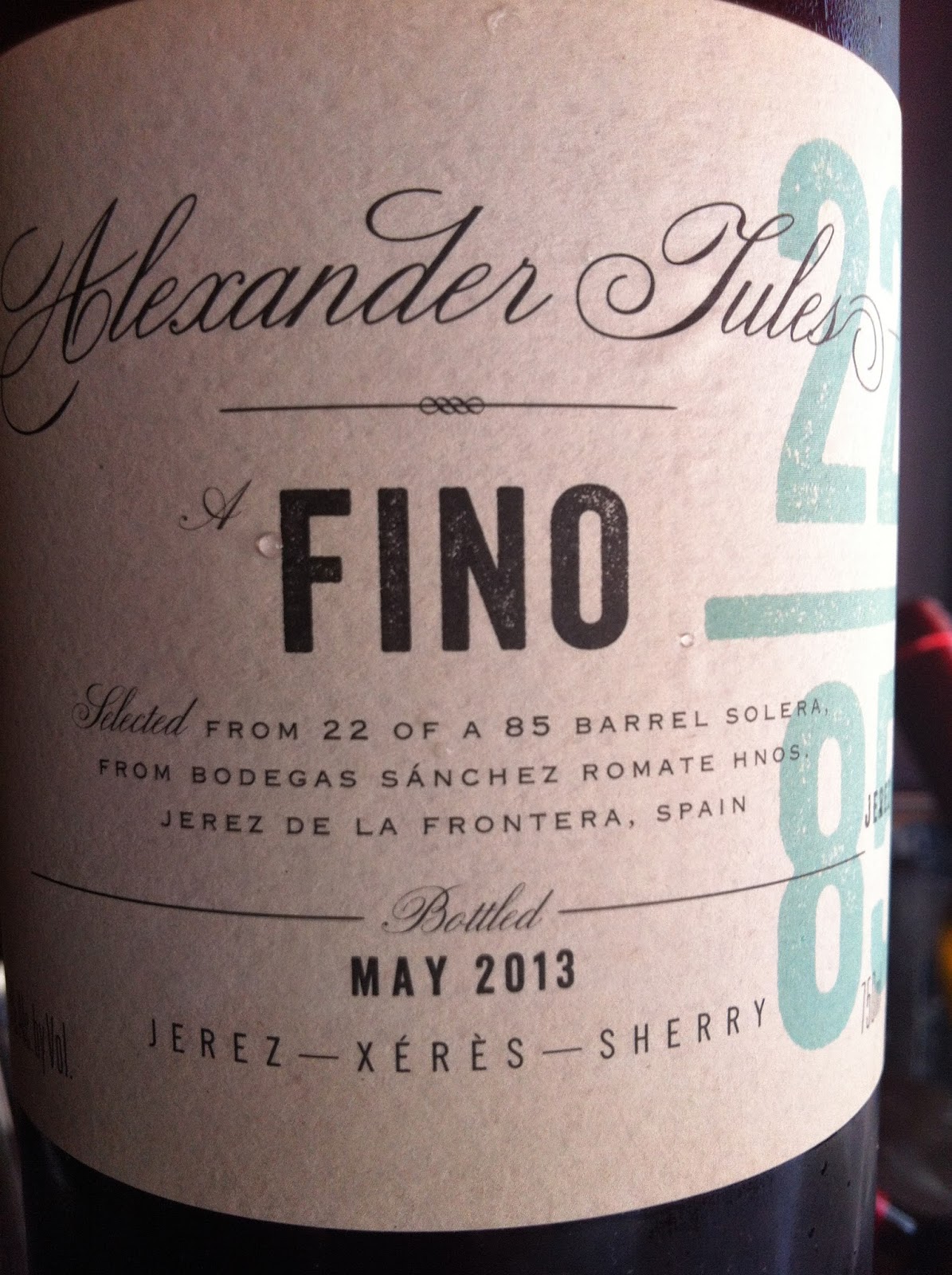 The Alexander Jules Fino 22/85 was selected from 22 of the 85 barrel Fino Celestino solera at Bodegas Sanchez Romate Hnos. I've visited this Bodegas before and they produce excellent Sherry so Alexander certainly chose well. The Fino Celestino solera contains the oldest Fino produced at the bodega, about eight years old on average. It is basically bottled En Rama, with minimal filtering, has an alcohol content of only 15% and was bottled in May 2013. Only 1100 bottles were produced, meaning it is very small production.

The Fino has a bright gold/amber color, darker than many other Finos, and a pleasant aroma of brine and almonds. I haven't found that strong of a briny aroma in most other Finos, and I might almost think it was a Manzanilla by smell alone. On the palate, the Fino is more full bodied, with a bold and complex blend of saltiness, nutty notes, and hints of spice and herbs. With each sip, I seem to find something else within its intriguing taste. And I love that it only has 15% alcohol, lower than many other Sherries. This is not a simple or forgettable Fino. 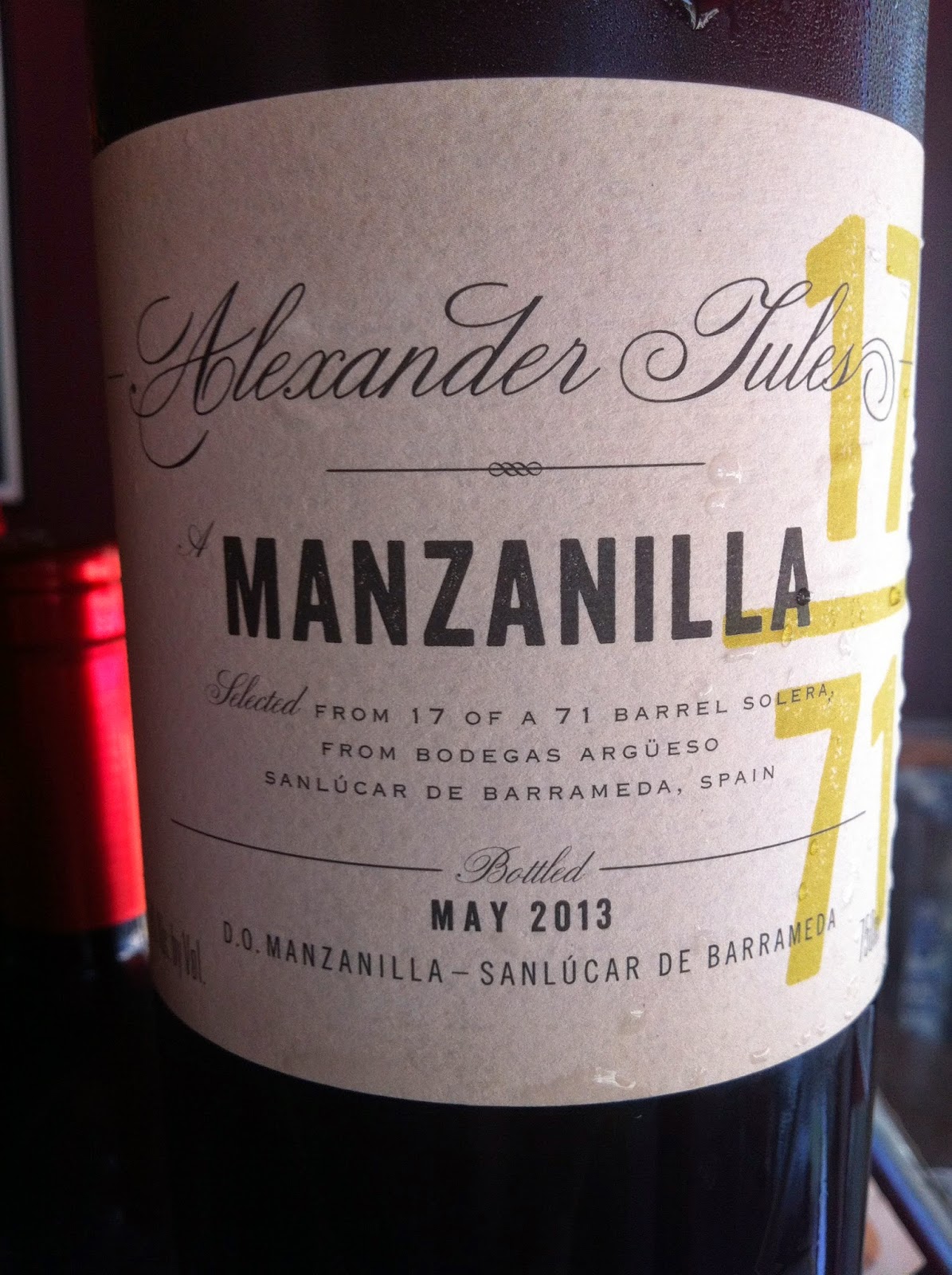 The Alexander Jules Manzanilla 17/71 was selected from 17 barrels of the 71 barrel San León solera from Bodegas Argüeso in Sanlúcar. The solera is as old as the bodega itself, having been established in 1822. It is basically bottled En Rama, with minimal filtering, has an alcohol content of 15% and was bottled in May 2013. Only 1100 bottles were produced, meaning it is also very small production.

It possessed the same color as the Fino, and from comparing the color of the two glasses, you would be unable to differentiate the two. Its aroma burst with a briny delight, enhanced with floral elements and a touch of spice. On the palate, it has that delicious taste of the ocean, bringing to mind oysters and uni. Again, this Sherry was complex and intense, with hints of citrus on the finish, something you don't often find in Manzanilla. I am a huge fan of Manzanilla and loved this Sherry, preferring it slightly over the Fino, but that is due only to personal preference.

I should note too that over the course of our lunch, there were some subtle changes in the Sherries. Part of it is due to the fact they warmed up some, but also because they are living wines, evolving over even a short time. Thus, it would be beneficial to savor and pay attention to these Sherries while you drink them, to assess the changes that come with time. 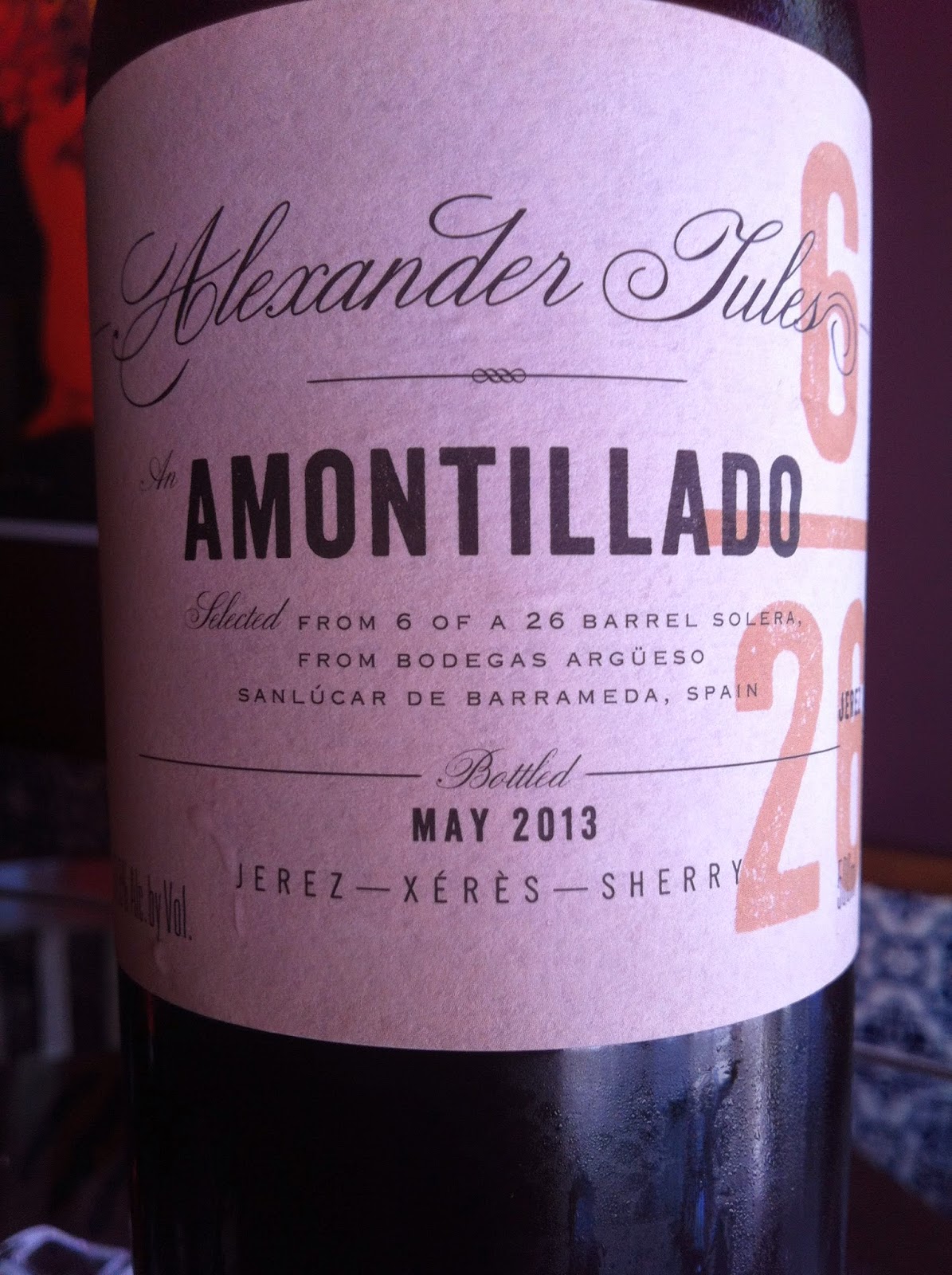 The Alexander Jules Amontillado 6/26 was selected from 6 of the 26 barrel "Amontillado Fino" solera from Bodegas Argüeso. It has an average age of ten years, has minimal filtering, an alcohol content of 17.5% and was bottled in May 2013. Only 1300 bottles (500ml each) were produced, meaning it is also very small production.

This was the wine that was described as "caramelized fish roe" and "sugar coated fish scale." It is a stunning Sherry, with such a fascinating and harmonious melange of aromas and flavors. There is that sense of the sea, the brininess that exists in the other two Sherry, and that is coupled with flavors of caramel, toffee and butter. There are also hints of dried fruit and spice. It is bright and intense, tantalizing and sublime. Everyone really enjoyed this Sherry, appreciating its complexity and simple deliciousness. Highly recommended. 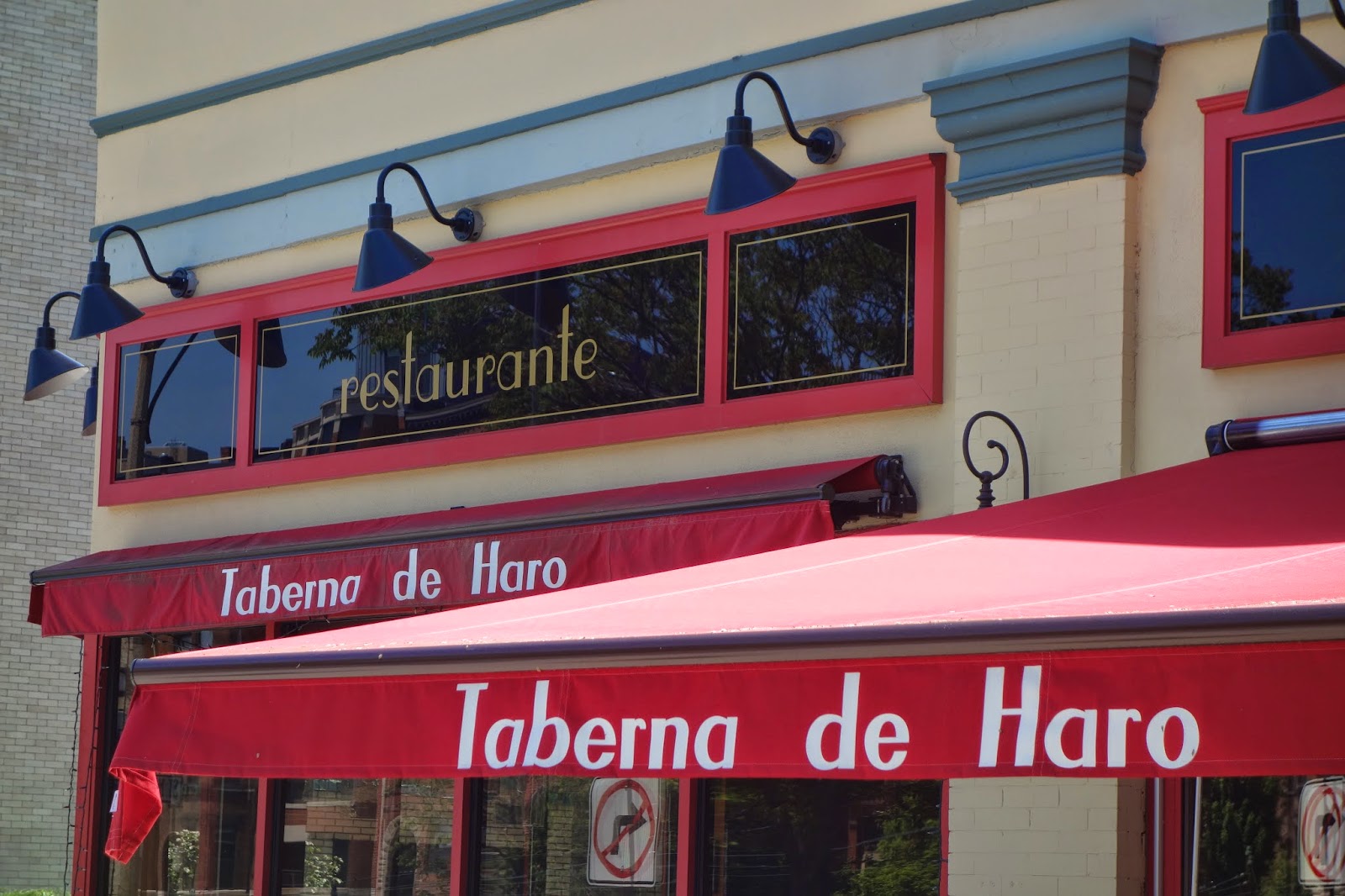 To taste these Sherries, stop by Taberna de Haro, which is one of the only (if not the only) restaurants currently carrying them. They are being distributed by Winebow so they are available in a few wine shops, though due to their rarity their availability is limited. The Fino (750ml), Manzanilla (750ml) and Amontillado (500ml) generally retail for around $45 a bottle. These are unique and impressive Sherries and I think the price is reasonable. I need to buy some myself.

Remember, once these Sherries are sold, they won't ever be offered again. This weekend, Alexander is traveling back to Jerez, to research and taste test some future bottlings. I look forward to these new bottlings, to see what other treasures that Alexander creates.
Posted by Richard Auffrey at 10:08 AM

Thanks for the info!