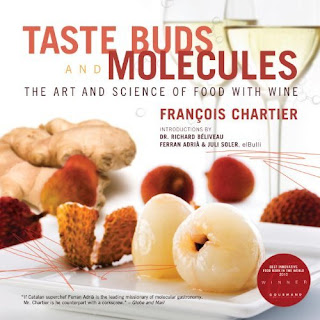 "Although it is indeed a rare pearl, the king of food pairings really exists, and it's fino sherry." (p.69)

Many people seem confused and/or intimidated by how to pair wine with food, likely due to hearing about all of the "rules" of wine/food pairing. If they consult all these various rules, they will find some that are contradictory, while others are overly complex. Some of those rules are antiquated or based more on custom than logic. My best advice is for you to ignore those rules, and drink whatever wine you wish with whatever dish you decide to eat. If you enjoy a big bold Cabernet with your haddock, then go for it.

But, even though there are no absolute rules, there are scientific and logical reasons why some wines and foods pair better together than others. You don't have to follow those pairings, but many people will likely find them pleasing so you might want to give some consideration to these pairings. What is the most versatile wine for food pairings? In what I am sure will be a surprise to many, it appears to be fino sherry, a dry, fortified wine that is underappreciated in the U.S. Spaniards though have know about the versatility of fino for a long time, and drink fino with a wide variety of dishes. Yet in the U.S., most of the sherry that is consumed is sweet rather than dry, and fino lovers occupy the tiniest of niches.

The quote that started this post is from Taste Buds and Molecules: The Art and Science of Food With Wine by Francois Chartier (McClelland & Stewart, September 2010). Chartier is a sommelier and author, and pioneered research into what he calls "food harmonies and molecular sommellerie." This book is currently available in Canada (I bought my own copy while in Toronto) but a U.S. edition is due out in 2012.

Chartier has written a compelling book on the science behind food and wine pairings, concentrating on the role of aromas. He believes that bridge ingredients are the most important catalysts in food/wine pairings. The term "bridge ingredients" refers to those ingredients, herbs, spices and flavors which can be added to a dish to create a greater affinity with certain wines. For example, rosemary is said to create a better affinity with Cabernet Sauvignon. So, though chicken and Cabernet Sauvignon is often not considered a usual pairing, the addition of rosemary to the chicken should create a better pairings with the Cabernet. Thus, the main component of a meal becomes much less important than the bridge ingredients. The key behind the theory of bridge ingredients seems to be based on the use of aromatic families.

Much of our sense of taste is really based on aroma, and those aromas are based on compounds such as acids, alcohols, phenols, and esters. These volatile molecules are of different molecular densities, which is important with wine in comparison to its alcohol levels. In low alcohol wine, generally 10%-14%, the initial aromas you perceive with have low molecular densities and later you will begin to detect the high density ones. This is why when tasting such wines, you should take some time with them, to see how they evolve in your glass. With high alcohol wines, 15.5%-20% (often found in fortified wines), the aromas with low molecular density either cannot be detected or vanish very quickly.

Thus fino and manzanilla will likely pair well with all of those foods, or dishes which use those items as bridge ingredients. Asparagus is often considered one of those difficult, if not impossible, pairings, yet there is a scientific reason why fino would make a good match. You might not have considered pairing a fino with a steak, but use some of the terpene spices on that steak, and you might have yourself a delicious pairing.

I have but summarized a few of the findings from Chartier's book, and I highly recommend that you check it out. Chartier covers so many other aromatic families and wines, giving you plenty of advice and suggestions for food pairings you might not have considered before. Though the book uses some scientific terms and analysis, in general it is still fairly easy to understand. For the wine lover, who wants to better understand the scientific basis behind wine/food pairings, this is an excellent book. Though not comprehensive, it addresses a diverse selection of food and wine and a future volume may expand the selection.

So go out now and buy some dry sherry, maybe a fino or oloroso, and see how well it pairs with a diverse range of foods.
Posted by Richard Auffrey at 4:00 AM

I love it! You definitely have to get into the aromas and flavors of a pairing to see what is going on. There is always so much and it creates so many ideas.

I have a couple flavor and pairing books burning up a shelf. It's reading time!

Richard, I love your posts. They are always so well researched and informative. I'm just finishing up Summer in a Glass, have to read Alice Feiring's book and then I'll look for Chartier's. Enjoy your trip to France and come back with lots of new knowledge to share. Jason, I too have a shelf full of food aand beverage pairing books, but I consult them all the time. That's my favorite part of the wine experience - seeing what combinations will spark the magic.
Lorie (@WiningWays)

I read Chartier's book and it was indeed fascinating. His comments about Fino Sherry in particular piqued my curiosity, so I went out an bought some. It was fabulous with tapas, but I do wonder if fino can work work with the main course. Certainly you could pair different styles of sherry with different course..