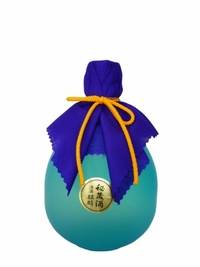 Usually if you are poured a glass of koshu, aged sake, you would know immediately because of its darker color, sometimes almost a mahogany. To me, koshu almost seems to smell and taste like an aged port or sherry, taking on more caramel and nutty aromas and flavors. It also becomes more full-bodied and its umami flavor intensifies. But I recently found an aged sake which shattered my preconceptions about koshu, and which also thoroughly impressed me.

Koshu is a rarity nowadays in the sake world, most sake being produced to be consumed within a year of their release. Historically, koshu was popular in the 17th century but fell out of favor in the 19th century, and has only seen a minor resurgence in the last 10-15 years. Sake may be aged for about 2-10 years and there are even a number of different terms that refer to the length of the aging.  Koshu, when not used as a generic term for all aged sake, may refer to sake that has been aged for 2-3 years. Hizoshu can refer to sake that has been aged for at least 5 years. You might also see Kokoshu (“old, old sake”) or O-goshu (“great old sake”).

The Kaetsu Sake Brewery Co. Ltd., located in the Niigata Prefecture, produces an aged sake which is unlike any I have ever tasted. The brewery was established in 1880 and is close to the Kirin-zan ("Kirin Mountain"), which is steeped in myth and legend. The Kirin is a mythical creature that originated in China, and has taken on a variety of forms throughout the centuries. It generally is depicted as a hooved animal, sometimes with antlers, sometimes covered in flames, and sometimes covered in scales. It is a symbol of good luck, and their rare appearance is considered to be very fortuitous. Kirin is also the name of Kaetsu's primary sake brand.

The Kirin Daiginjo Hizoshu uses Yamada Nishiki rice which has been polished down to 40%, and it has been aged for five years. If you look at the picture above, you can also see that the sake comes in an interesting blue bottle. What makes their aged sake different is that they store it at very low temperatures, which prevents, or at least slows, some of the typical chemical processes that occur during usual sake aging. So, if you look at the sake, it lacks the darker colors of other aged sakes. It is basically clear in color, the same as almost any other usual daiginjo. So, just be looking at it, you would never realize it had been aged for five years.

When you taste it, you won't realize you are drinking an aged sake either. It is clean and dry, with a very smooth and mellow taste, with subtle hints of fruit, some melon and pear. If you slowly savor its taste, really paying attention, you will realize its complexity and detect the subtle layers of flavors. As a Daiginjo, I would have been impressed, but knowing it was also an aged sake made it even more impressive. It really showed me the potential of aging sake, as well as indicating the diversity of aged sake. This is a sake I highly recommend.
Posted by Richard Auffrey at 4:00 AM