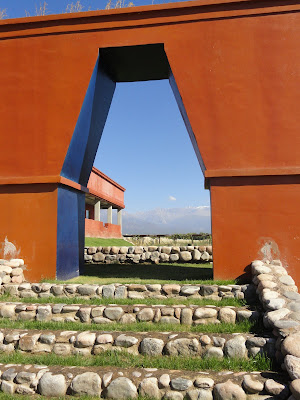 What a fascinating fusion, an Argentine winery with a Japanese aesthetic and the design of a ancient Mayan city. Adding to this compelling fusion, you will find a "Black Soul" which produces a "Mystery" wine and even a bunch of llamas! (And who doesn't love llamas?) 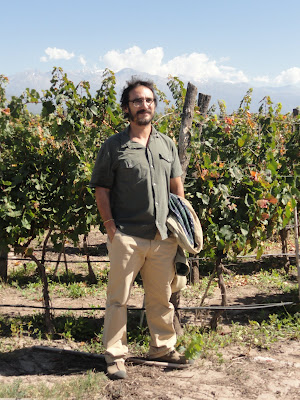 This intriguing melange is a description of Alma Negra (which translates as "black soul"), a wine project of Ernesto Catena, the son of the renowned Nicolás Catena Zapata. While I visited Argentina, I got to meet Ernesto and tour the lands and winery of Alma Negra, all of which were compelling for a variety of reasons. Ernesto straddles the line between science and art, having a computer science degree from Tufts University in Massachusetts (giving him a local connection) as well as a design degree from the Domus Academy in Milan. Yet it is his passion for beauty, his affinity for Japanese aesthetics, which seems to be his most significant motivation. 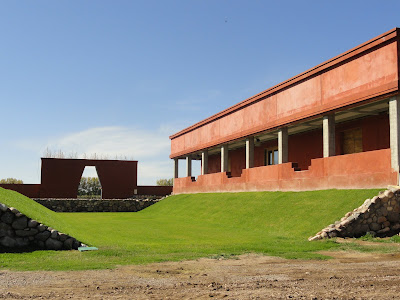 Ernesto received the winery from his mother, and it was his desire to create a winery dedicated to beauty. While traveling in Mexico and Guatemala, Ernesto, who has some Mexican ancestry, was taken up with the architecture of the ancient Mayans and he decided to construct a winery to showcase a Mayan style, which his father would later adopt for his own winery. This is a cool look, giving the winery a connection to the past as well as contributing to an appealing aesthetic.  Above, you can see a Mayan ball court area, located next to the winery, where bocce ball is now played. It is always one of the favorite areas for the llamas that run loose on the property.  There is a polo field elsewhere on the property, and Ernesto is an avid player. 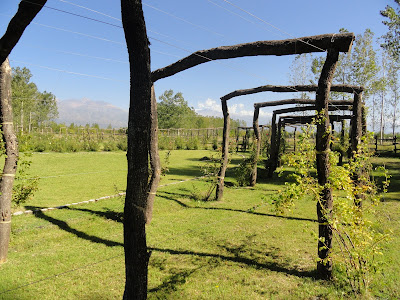 On the grounds, there is a unique rose garden, which grows an ancient species of rose from Patagonia. It is surrounded by a circle of wooden frames, as seen above, and it was intended that this circle could be seen from the sky. This was not an accident as when Ernesto designed the winery, he looked up into the sky for his inspiration. The round winery is intended to symbolize the earth while the rose garden symbolizes the sun. The symbol of the moon is their labyrinth of vines, where Ernesto actually hopes people will wander lost for a time, and "get to know their inner souls." At the center of the labryrinth, Ernesto has buried a cow horn stuffed with crushed, powdered quartz, also known as Biodynamic Preparation 501. 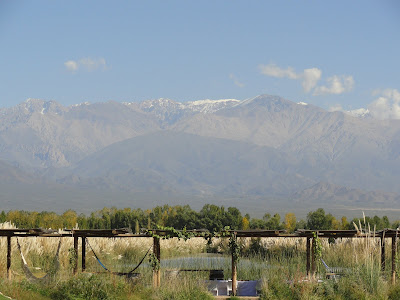 The vineyards are planted with Malbec, Cabernet Sauvignon, and Cabernet Franc, and their first vintage was 2003, when they only produced 11 barrels of wine. The vineyard is certified organic and should be certified biodynamic by Demeter next year.  Ernesto also owns vineyards in other areas of Argentina, including Valle de Uco, Agrelo, La Consulta, Vistaflores and Rivadavia. In addition, he purchases grapes from about 150 different suppliers, only two which are biodynamic, and most with which they work closely with to ensure the quality of the grapes. You will also find numerous animals wandering the premises, including horses, cows, and llamas. 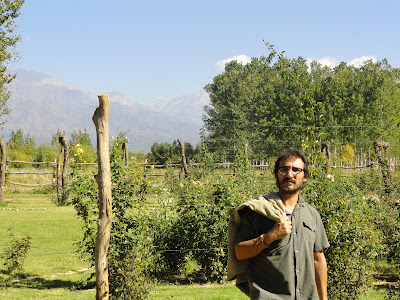 When planning the winery, Ernesto did not have any intention of making it biodynamic. But, once he learned about the theories of biodynamics, he felt that it fit his already existing philosophy, his sense of aesthetics. To Ernesto, biodynamics does not necessarily make better wine but it makes them feel better and it is aesthetically beautiful. He even admitted that there are things wrong in biodynamics but "we need to take a stand" as "we have gone too far on the side of science" and "need more balance, to leave things more natural."  Biodynamics is a goal, and aspiration, for Ernesto, despite the fact there is no real market in Argentina for biodynamic wine. Little of Ernesto's wines are currently biodynamic, and it will take years for the winery to start producing a significant amount of biodynamic wines. 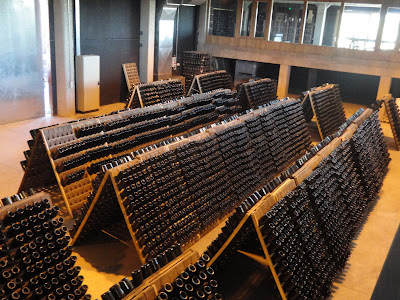 The winery on the property is made only to produce sparkling wine, and you can see the riddling room above. There are future plans to build a still winery next to the sparkling one.  Ernesto seeks originality in his wines and enjoys experimenting, unworried about taking risks. He indicated that their current vintage 2011 was very good. (Remember that as Argentina is in the Southern Hemisphere, our spring is their fall so they already had their harvest for 2011). 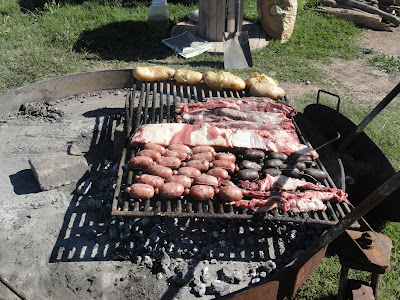 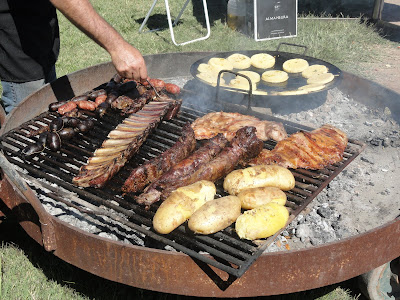 We were fed very well for lunch, a wonderful asador, Argentine barbecue, just a smorgasbord of grilled meats as well as a scrumptious fried provolone. A carnivore paradise, which makes me ponder how well I could dine in Argentina if I lived there. As we ate outside, we were surrounded by the majesty of the vineyard lands, with a river behind us, the mountains jutting forth. We watched llamas wander as we savored delicious food and wine. 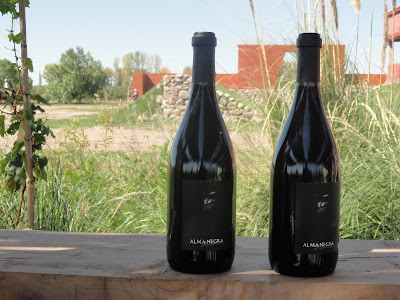 Of the Alma Negra wines, the two which most impressed me were the Misterio (the "mystery") and Gran Misterio. The name is an homage to the fact that we know so little about everything, and should pay close attention to what we do not know. An intriguing philosophical thought, and how many other wines do you know where the name has such a deep, intellectual meaning?

The 2009 Alma Negra Misterio ($40-$45) is a red blend and may contain Malbec, Petite Verdot, Merlot, Bonarda and Cabernet Sauvignon. Ernesto wants to keep the blend a mystery, to prevent any preconceptions based on knowing the grapes involved. It is primarily in the U.S. where people constantly want to know the grapes within a wine. Only 1000 cases were produced, and it has an alcohol content of 14%. The wine had a sweet spice aroma, with hints of blackfruits.  On the palate, it was decadently smooth, with a complex melange of spice, vanilla, blueberry, ripe plum, and more. It was well structured with a long and pleasing finish. A hedonistic wine meant to savor, and which does not require food to enjoy, though it definitely would pair well with a fine steak or hearty dish. I was very impressed with this wine and highly recommend it.

The 2006 Alma Negra Gran Misterio ($80-$90) is a similar blend, though again as we do not know the actual make-up, it could even be different than the regular Misterio. Only 500 cases were produced, and it has an alcohol content of 14.1%. It is the darker, bolder and more tannic cousin to the regular Misterio. With a dark purple, almost black, color, it also has a milder aroma, still of spice and blackfruit. While the regular Misterio seduced you, this wine ravages your palate with its power. It is more dark spice, leather, and blackberry, with fierce tannins. It is a wine that desperately needs to be paired with a hearty hunk of beef, and I would like to see how a few more years of aging might mellow this wine a bit. 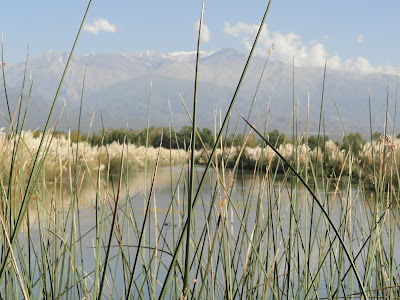 It truly is a stunning vineyard, and I admire Ernesto's philosophy and aesthetic values. He is a unique and passionate individual and I wish him all the luck with his future endeavors.
Posted by Richard Auffrey at 4:00 AM