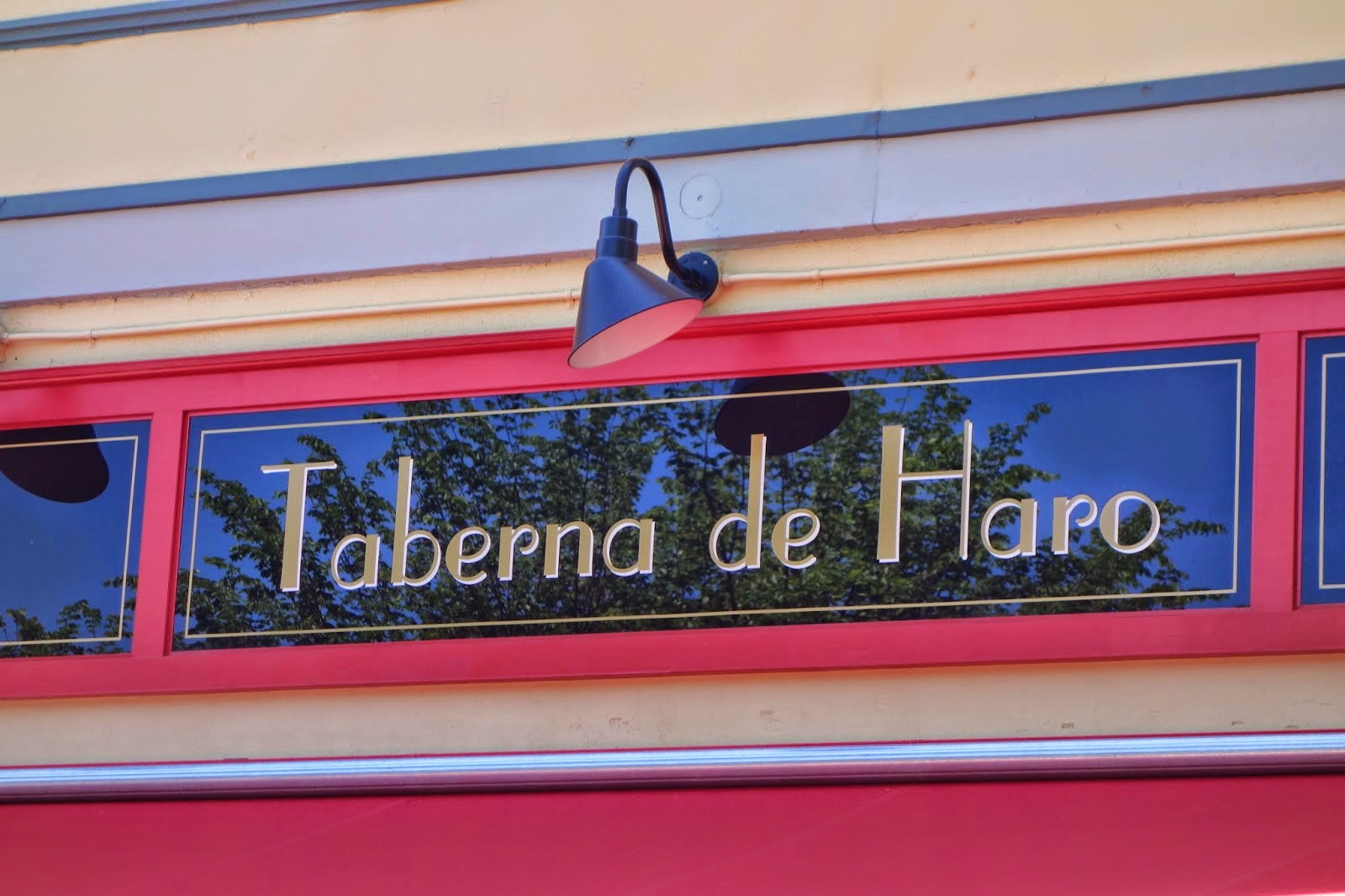 "It's almost unfathomable how our friends in Jerez manage to create such beautiful wine at such low prices. With hundreds of barrels in the soleras and dozens of careful steps required in the unique process, sherry is phenomenally labor-intensive yet an extraordinary value."
---Chef/Owner Deborah Hansen of Taberna De Haro

Why don't people drink more Sherry, especially dry Sherry? It is one of the most under-appreciated wines in the U.S.,and most of the Sherry that Americans drink is sweet. A number of American wineries produce their own Sherry-like wines, and they also tend to be sweet. However, dry Sherry is such a wonder, being extremely food friendly, delicious, complex and usually a  good value. I've written over 25 articles about Sherry, providing plenty of reasons to explore this compelling fortified wine.

For example, how much would you have to pay for a 40 year old California wine? Or a 40 year old Bordeaux, or German Riesling? You would probably expect to pay well over $100 for such aged wines, especially for quality wines. On the other hand, you can find an incredible 40 year old bottle of Sherry for less than $100. Few other wine regions in the world can offer a similar value for a quality wine of that age. As Deborah said, it is such a conundrum as to how Sherry bodegas accomplish such legerdemain.

The lack of availability of good, dry Sherry is a problem for a number of Americans. It can be difficult to find at wine shops and restaurants, partially because such places often have difficulty selling Sherry. It isn't worth it to them to stock quality Sherry for the few customers that buy it. Across the country, there are a few Sherry stars, places which understand this unique wine and try to showcase and promote it to their customers. These are places you should patronize, places worthy of our support. In the Boston area, the top Sherry sanctuary is Taberna De Haro, 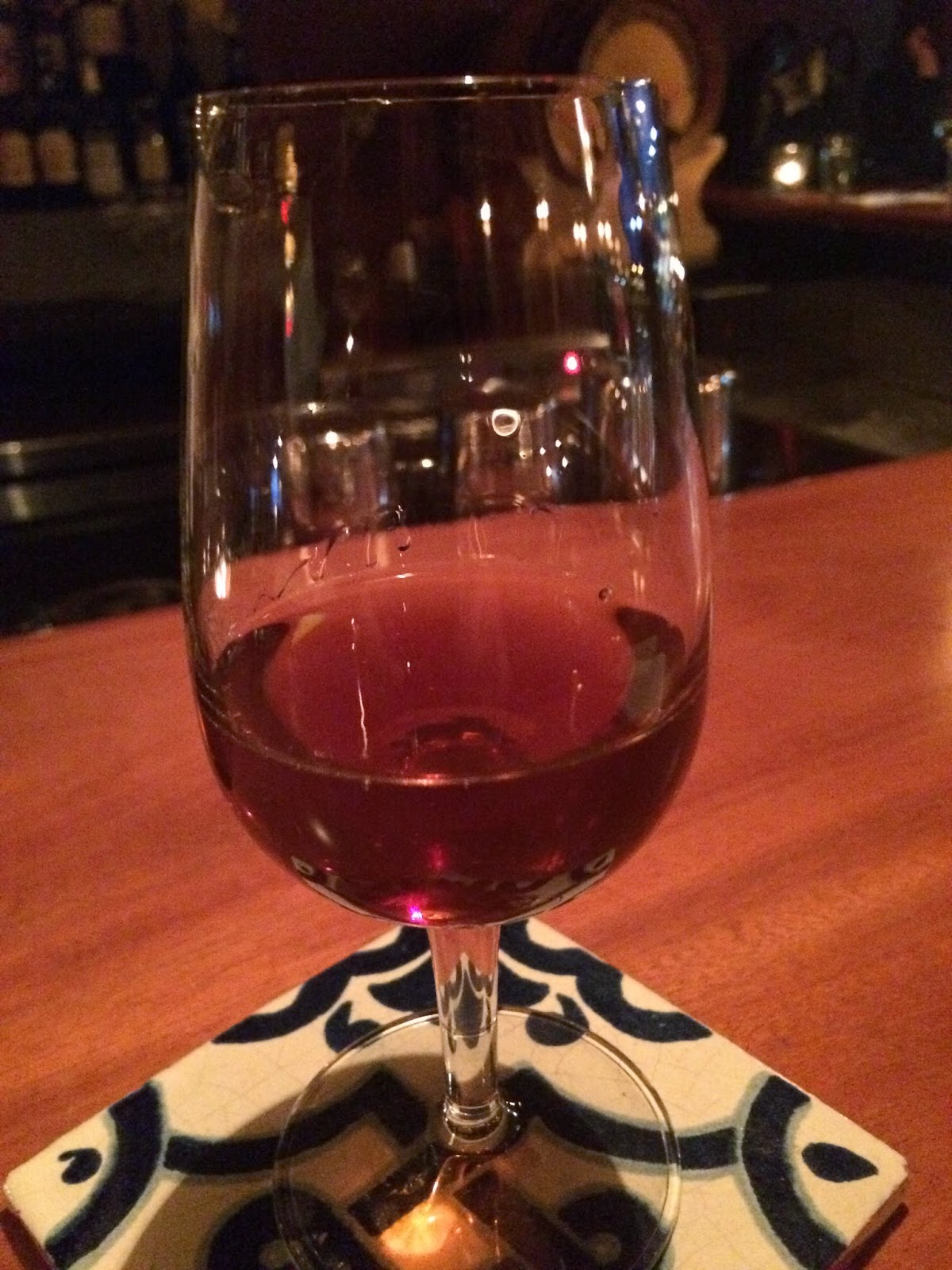 At Taberna De Haro, Chef/Owner Deborah Hansen has compiled a growing list of Sherries which currently numbers 62 bottles. At any one time, about 13 of those Sherries will be available by the glass, priced from $5-$20, with most of the glasses costing $8 or less. The glass list includes a variety of Sherry types, including Fino, Manzanilla, Amontillado, Oloroso, Palo Cortado and a couple sweet options. You'll be able to explore much of the diversity of Sherry, and if you are more adventurous, you can even order a half-bottle or full bottle of many other choices.

In addition, the restaurant offers Sherry Flights, which change every two weeks, and include four different Sherries for $25 and you also get a complimentary cheese tasting plate. And if you decide to order a bottle of Sherry, even only a 375ml bottle, you'll receive a  complimentary plate of olives. Visit Taberna de Haro, get a lesson in Sherry, and you'll understand why it is so special. 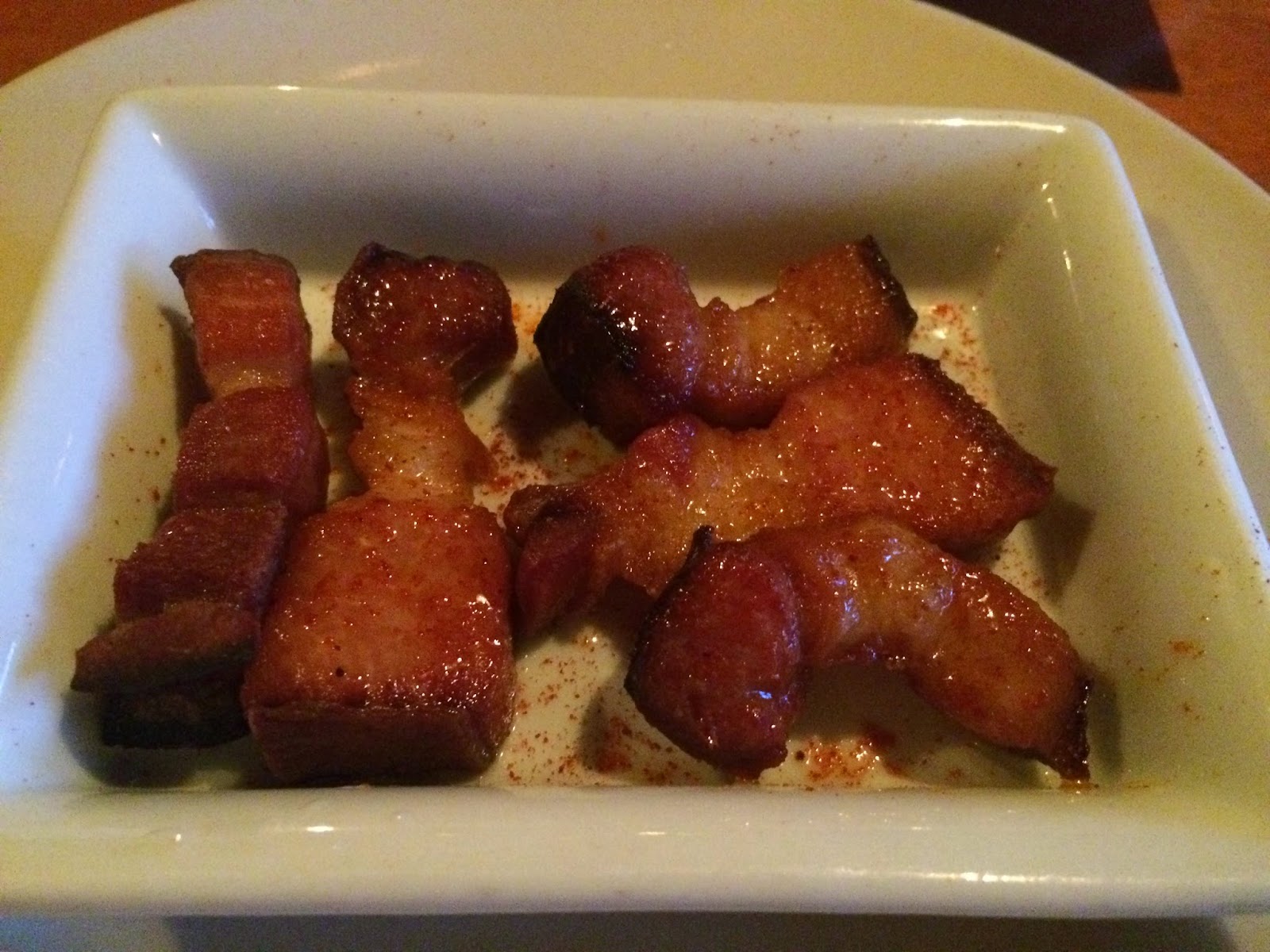 Last week, I attended a wine dinner at Taberna de Haro, hosted by representatives of the wine regions of Ribera del Duero and Rueda. I showed up early and sat the bar so that I could try a few Sherries, including one of their newest offerings. I also ordered some Chicharrones, fried pork belly, to accompany the Sherries. A tasty and salty mix of crunchy and fatty bits, they were an excellent accompaniment to the Sherry. 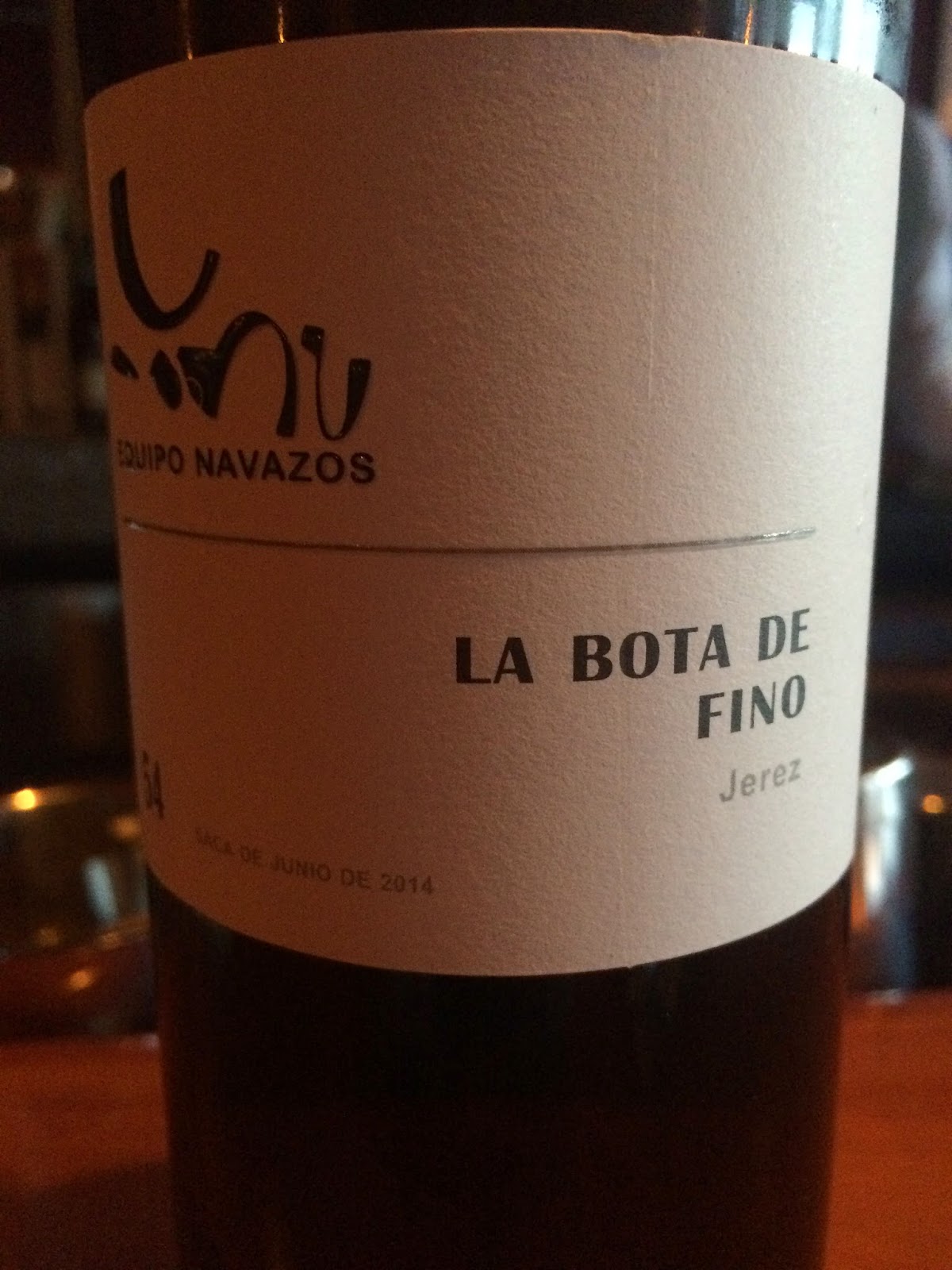 I began with a glass of the Equipo Navazos Fino La Bota 54 ($11.50). Equipo Navazos purchases, blends and stores Sherries, and they often are unique and compelling. They number their bottlings, which usually are of limited availability. The Palomino grapes for this Fino are from the famed Macharnudo vineyard, one of the top sites in the Sherry region that has sometimes been called the "Montrachet of Jerez." This Fino has a mean age of about ten years, and will last for many years if stored well. The usual advice is to drink a Fino within a year of its release, but this is one of the exceptions. I found this Fino to be very fragrant, a pleasing aroma, that complemented its intense and complex taste. It was bone dry, bright and crisp, with mild briny and nutty notes. This Fino has more layers of flavors than you find in a number of other Finos, and is well worth checking out. 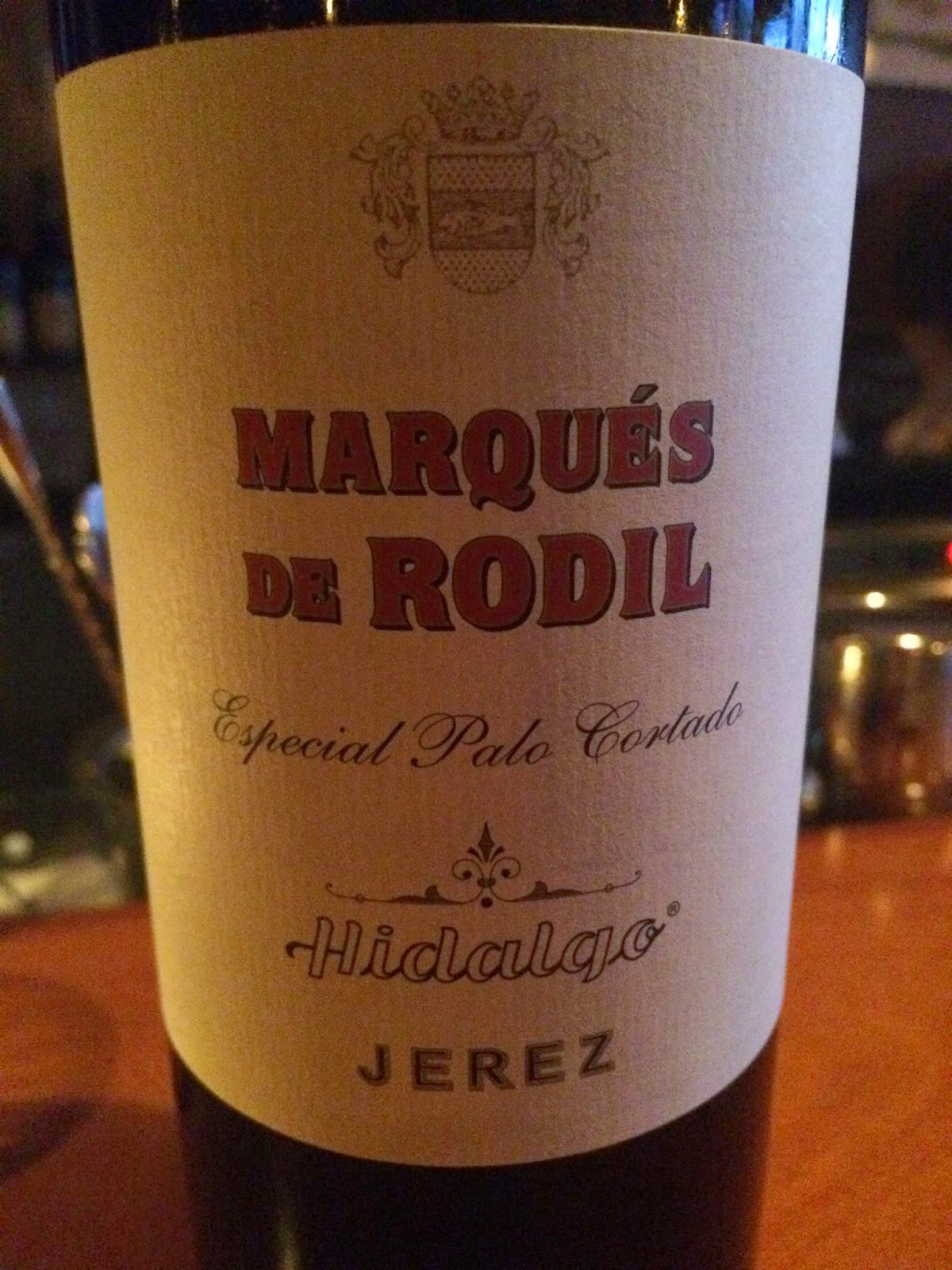 My next choice was the Emilio Hidalgo Marques de Rodil Especial Palo Cortado ($8). Bodegas Emilio Hidalgo, founded in 1874, produces a variety of delicious Sherries and this is one of their top Sherries. The solera was started in 1961 and the average age of this Palo Cortado is about 15-20 years. I love the Palo Cortado style, which is somewhat a blend of the best aspects of Amontillado and Oloroso. With an amber color, I found this Sherry to have a funky, but interesting, aroma. On the palate, it was complex and intriguing, with a delightful blend of flavors included salted nuts, caramel, and dried fruit. It was smooth and elegant, with a lengthy, satisfying finish. Another excellent option and recommended. 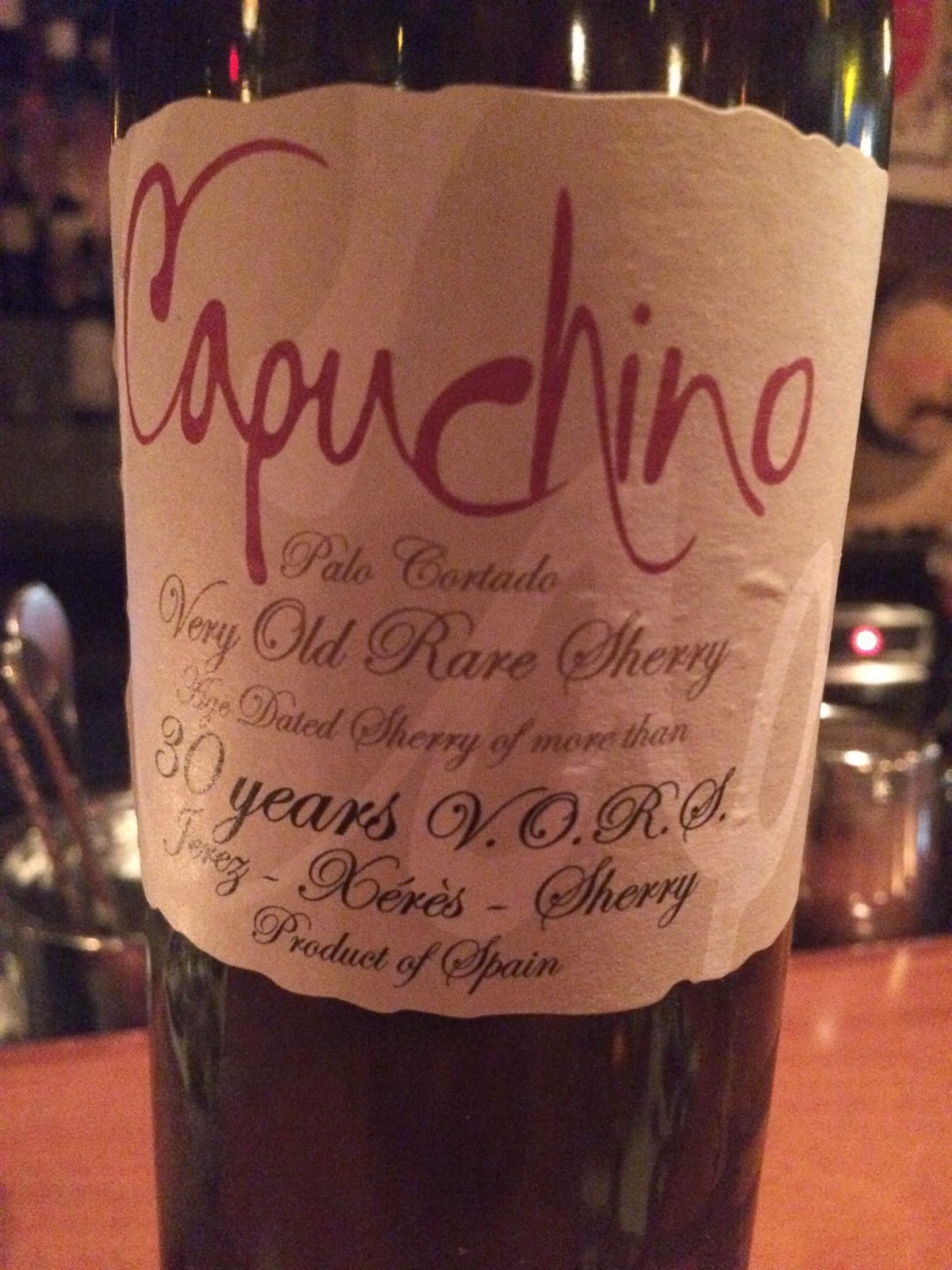 My final choice, and the one which I was most excited to taste, was the Osborne Capuchino Palo Cortado ($20). This is their most expensive Sherry available by the glass and Sherry lovers won't regret paying for it. I was tempted to order a second glass it was so amazing. This is such a unique and sublime Sherry, one sure to impress.

The solera for this Palo Cortado was started in 1790, meaning that a tiny portion of this Sherry is over 200 years old! What a sense of history. The solera was once owned by Bodegas Domecq but when they dissolved,it was acquired by Osborne. The Sherry is now aged in El Puerto de Santa Maria and has an average age of 30 years, earning it a VORS classification. With a dark amber color, you'll first sit and savor the alluring and complex aromas of this Palo Cortado. Your seduction begins with these aromas, and you'll be hooked from your first sniff. Once you taste it, the seduction will be complete and this Sherry will touch your heart and soul. Its complexity, its melange of intriguing flavors, and the depth of layers of those flavors cannot be resisted. It is elegant and sublime, with a finish that doesn't seem to end, and you certainly don't want it to end.

This is a Sherry to experience, and words cannot adequately describe its merits. I highly recommend this Palo Cortado and it is a perfect example of the heights that aged Sherry can reach. You probably won't have many opportunities to experience a Sherry of this quality so go to Taberna de Haro and let yourself be seduced by this Palo Cortado.
Posted by Richard Auffrey at 3:00 AM

Richard, you have such a tremendous understanding and appreciation of our sherry. Think you so much!