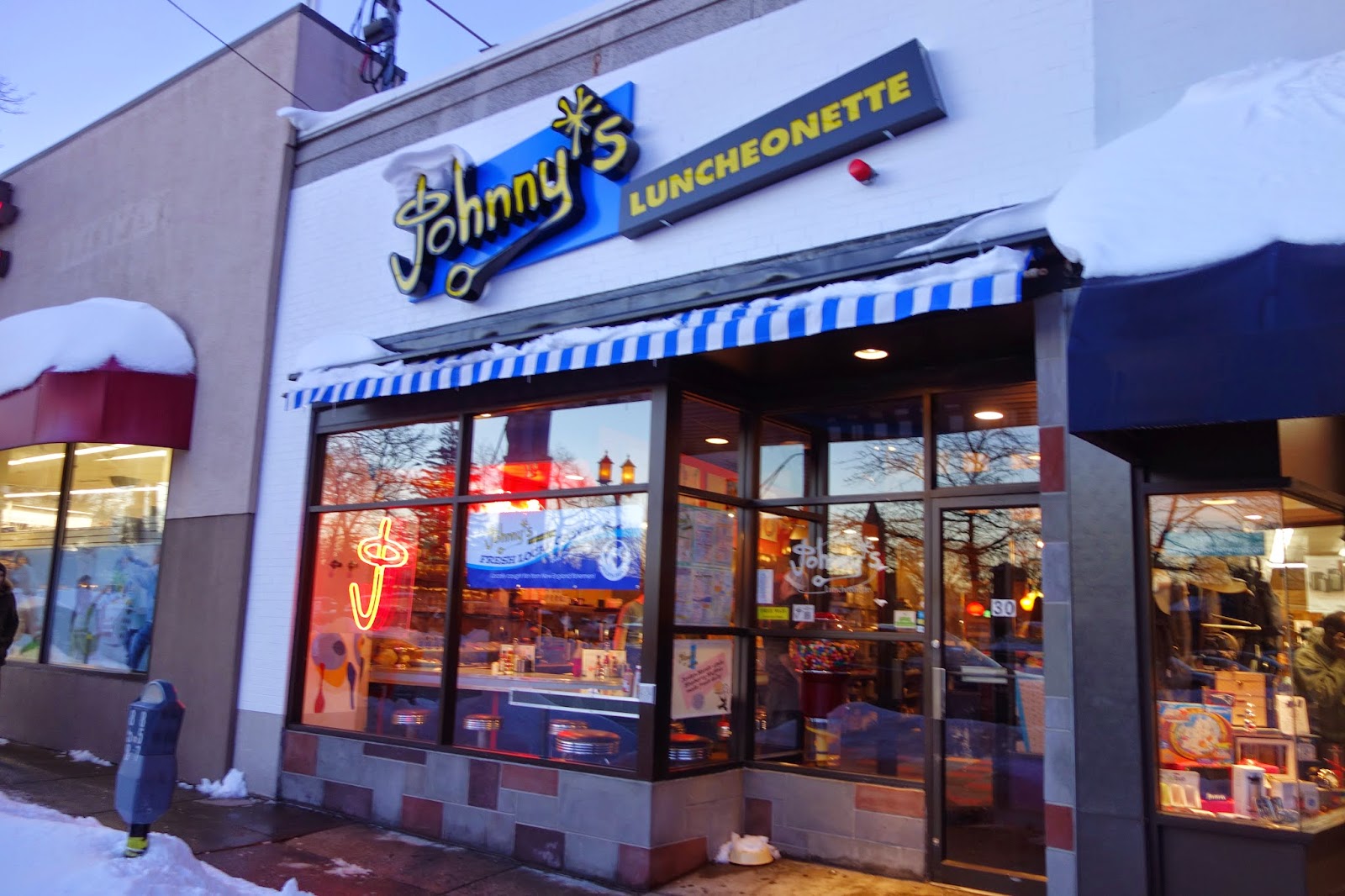 For years, I've been exhorting my readers to eat more sustainable seafood, especially domestic seafood. Sustainability is needed to protect seafood species and preserve the health of our oceans. Seafood tastes great but is also healthy, and can reduce your chance of heart disease by one-third. The U.S. imports about 91% of our seafood, and that is a shame and needs to be changed, to support our local and domestic fishermen. There is plenty of excellent, sustainable seafood found in U.S. waters, and our local fishermen need and deserve our support.

We also need to support those restaurants which sell sustainable, local seafood. I recently dined at an intriguing spot that impressed me with their commitment in this regard. I received a media invite to attend a talk, Dishing About Fishing: What It Takes To Get New England Seafood Onto Our Local Tables, led by Jared Auerbach of Red's Best (which I will write about in the near future). The talk took place at Johnny's Luncheonette, a diner-like restaurant in Newton, and we got to sample some of their fare.

Johnny’s Luncheonette was first opened over twenty years ago by John Furst and Neal Solomon, who wanted to create a traditional Jewish deli, Last March, the restaurant was sold to Karen and Kevin Masterson, who have about 30 years of experience in restaurants and most recently owned Nourish in Lexington. During the past year, the Mastersons have remained true to the roots of Johnny's, while introducing changes which they feel will make it even better. I met and spoke with Karen, a woman of sincerity, passion and realism.

The restaurant is open seven days a week, from 7am-9pm, except for Sundays when they are open from 8am--8pm. Breakfast is served all day, including such items as Crunchy French Toast, Jordan Marsh Blueberry Muffins, Pastrami Scramble, Matzoh & Eggs, and more. Most breakfast items are less than $10. For Lunch, there are a variety of sandwiches, from Reubens to Meatloaf, and burgers, again most items costing less than $10. There are also Dinner Appetizers and Entrees, from Macaroni & Cheese to Neal's Homemade Chopped Liver. They also serve Beer & Wine (and are currently working on improving the selections), $4 Mimosas, as well as tasty Mini Milkshakes.

All of these options are enhanced by the fact that the Mastersons are using plenty of local ingredients and seasonal produce. For example, some of their breads come from Iggy’s while the beef for their burgers comes from a small ranch in Maine. Karen's family in Alberta once owned a farm, so her concern for sourcing local fresh ingredients extends back many years. She also still grows some of her own fruit and vegetables. Besides the previous examples, Johnny's also sources much of their seafood from Red's Best, purchasing sustainable, local seafood. Though they only use about fifteen pounds of seafood each week, they hope to soon double this amount.

On their menu, you'll find seafood selections including Fried Fish Sandwich ($8.25), Fish & Chips ($12.95), Fish Tacos ($13.95), and Fresh Catch (1/2 pound of fish for $12.95). If you check the menu, you'll find that none of these seafood dishes mention the type of fish that will be served. That is an intentional omission because of their philosophy on the issue. Johnny's purchases whatever seafood is fresh and available from Red's Best, so their selection will vary each time. Johnny's is flexible in which seafood they will buy, which helps keep the prices down, and also supports local fishermen whose catch may vary. This is an excellent way to source one's seafood, one that more restaurants should follow.

This is not always an easy sell for customers, but presents an educational opportunity, a chance to expose their customers to different seafood, which tastes just as good as familiar seafood. Customers might want cod or haddock but only pollock is available, and most people would enjoy it just as much. Fortunately, this hasn't been a significant problem at Johnny's, whose customers are usually willing to try whatever seafood is available. Karen stated that Johnny's is not perfect in their sustainability, but she is realistic about the matters and sees it as a constant evolution, working towards becoming better all the time.

It is also very important to Karen that their food prices remain reasonable. She wants the fishermen and other food suppliers to be able to afford to dine at her restaurant. As you can see, their seafood dishes are very reasonably priced, and that makes it accessible to all of their customers. High-priced seafood is sometimes an obstacle to seafood consumption, but at Johnny's, they have kept the costs at a very manageable level, in part due to their flexibility in which species they purchase. Customers thus has plenty of reason to opt for seafood at Johnny's.

I got to taste several different items, from Portuguese Fish Stew to Fish Tacos, with seafood including monkfish, scup and pollock. The fish stew was delicious, with a delicious blend of spices and flavors, and tender pieces of monkfish. The breading on the fried seafood, such as in the fish tacos, was light and clean-tasting, and the fish itself was moist and tender. Both the scup and pollock were tasty, and would appeal to almost any consumer. I  didn't hear any complaints about the food from any of my dining companions. And I definitely want to return to Johnny's, to sample more of their selections.

Johnny's Luncheonette isn't trying to be a role model for other restaurants, but is simply doing what they believe is the best. They want to provide delicious and affordable food, much of it locally sourced, including sustainable seafood. However, other restaurants should take a lesson from Johnny's, especially concerning their approach to seafood. Sustainable seafood  doesn't have to be expensive, and people should be more flexible about the types of fish they are willing to eat. Check out Johnny's Luncheonette and enjoy one of their seafood dishes.